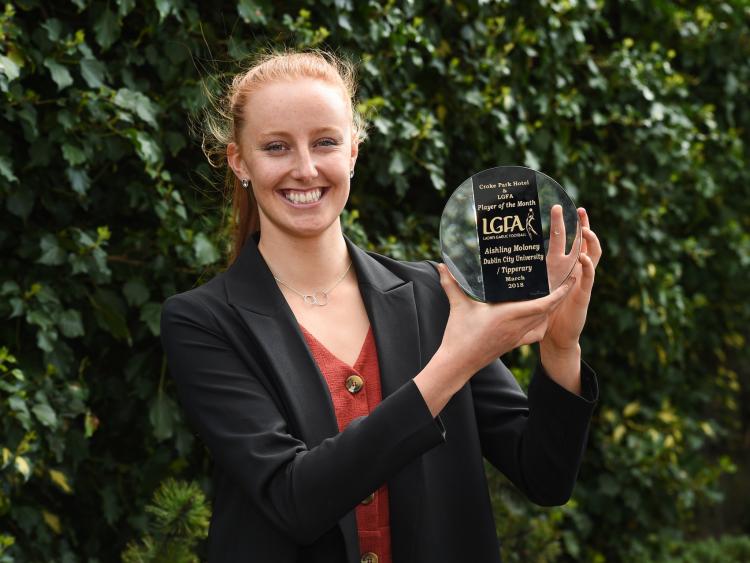 Tipperary's Aishling Moloney has been named as the The Croke Park Hotel LGFA Player of the Month award winner for March.

The individual accolade for 20-year-old Moloney rounds off a memorable spell for the Cahir native.

A 2017 TG4 All-Ireland intermediate championship winner with the Premier County, Moloney has carried that rich vein of form into 2018.

Tipp, who were promoted from division three last year, have found the step up to the second tier very much to their liking.

Moloney also produced a string of fine performances to help seal a first GFP O’Connor Cup title for DCU since 2011.

Moloney scored 1-6 in the semi-final victory against UCD at IT Blanchardstown, before producing a powerful final performance. It was an eventful Abbotstown decider for Moloney, who finished with 0-7 on the day. She was sin-binned in the second half, but came back on to help create a pivotal penalty scored by Sarah Rowe, before Moloney swung over a brilliant winning point to seal the silverware against University of Limerick. Moloney’s individual display also earned her the player of the match award - and she will be hoping for more silverware in the months to come.

Tipperary are preparing for next Sunday’s Lidl NFL Division 2 semi-final against Armagh in Kinnegad (1pm) and will face Cork in the TG4 Munster senior semi-final.

Aishling was presented with her award by Ian Monks, Senior Manager The Croke Park Hotel.