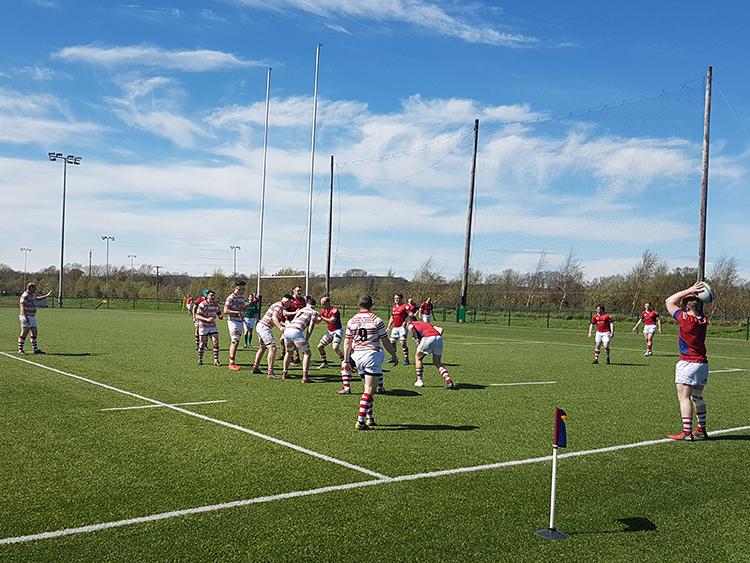 Nenagh Ormond took on and beat UL Bohs on an artificial pitch in the University of Limerick.

Although Nenagh Ormond lost six of their last seven games in division 2A of the Ulster Bank League the Tipperary outfit re-discovered their very best form at the University of Limerick on Saturday afternoon when stunning UL Bohemian 23-18 in the semi-finals of the promotion play-offs.

And, Nenagh Ormond were absolutely terrific in this contest. Playing with the aid of a stiff breeze in the opening half the visitors to the University of Limerick led 20-5 at the break and although UL Bohs closed the gap to five points (23-18) with sixteen minutes of normal time and nine minutes of injury time to play Nenagh Ormond dug in and held the much-vaunted Limerick side at bay in a thrilling finish.

As a result UL Bohemian are relegated to division 2A next season while Nenagh Ormond prepare to take on City of Armagh in the promotion play-off final with a place in division 1B up for grabs.

On Saturday afternoon City of Armagh beat Highfield in Cork 27-13 meaning that Nenagh Ormond will travel to face the Ulster outfit on Saturday, April 28th.

A Clayton Stewart penalty in the seventh minute set Nenagh Ormond on their way, but UL Bohs hit back with a try three minutes later - with ball in hand the Limerick side were very impressive. Without the ball, however, UL Bohemian were far less dynamic and Derek Corcoran took full advantage in the 22nd minute when the out-half beat his man in midfield and scooted around the full-back to present Nenagh Ormond with a 10-5 lead (Clayton Stewart nailed the conversion).

Seven minutes later Nenagh Ormond were ten points clear - in 29th minute a searching kick from Clayton Stewart forced the UL Bohs full-back to carry the ball back over the try line and following the resultant five-metre scrum Kevin O’Flaherty trotted in for a try without a hand being laid on him. Clayton Stewart converted and the visitors led 17-5.

In the 34th minute Clayton Stewart booted over a terrific penalty from long-range to leave fifteen points between the teams.

UL Bohs were growing a little frustrated with the situation they found themselves in and a fight broke out in the 38th minute. Although it appeared that the incident had been initiated by the UL Bohemian player Nenagh Ormond’s Kevin Seymour was sin-binned alongside a member of the UL Bohs team.

Some terrifically-disciplined Nenagh tackling denied UL Bohs tries in both the 46th and 50th minutes, but the home side stuck for their second of the afternoon in the 51st minute to leave eight between the teams. A converted penalty reduced the deficit to five in the 56th minute (20-15) as Nenagh Ormond struggled to exit their own half.

Finally, Nenagh Ormond enjoyed some sustained possession of the ball and made it count when Clayton Stewart drilled over a penalty in the 59th minute.

UL Bohs were coming at Nenagh in waves now and only a brilliant turnover tackle performed by Aidan Doyle in the 62nd minute denied the home side a try.

Two minutes later a UL Bohemian penalty left a tantalizing five points between the sides and despite a brave effort you suspected that Nenagh Ormond would find it difficult to hold out with sixteen minutes of normal time to play (23-18).

Nenagh Ormond, however, had other ideas and they tackled like men possessed for the remainder of this contest. Indeed, Nenagh also pieced together a couple of notable attacks of their own - penalties from the boot of Clayton Stewart in the 79th and 81st minutes dropped short with UL Bohs running the ball back on both occasions.

UL Bohemian built huge momentum between the 82nd and 87th minutes when a sustained attack (which lasted for over five minutes) forced Nenagh right back onto their try line. Ormond finally coughed up a penalty and Eoin Gardiner shipped a yellow for his trouble in the 87th minute.

The moment appeared to have arrived when UL Bohs would, finally, force a try, but, once more, Nenagh Ormond defended manfully and although the Limerick lads did manage to get the ball touched down in the corner there was a foot in touch.