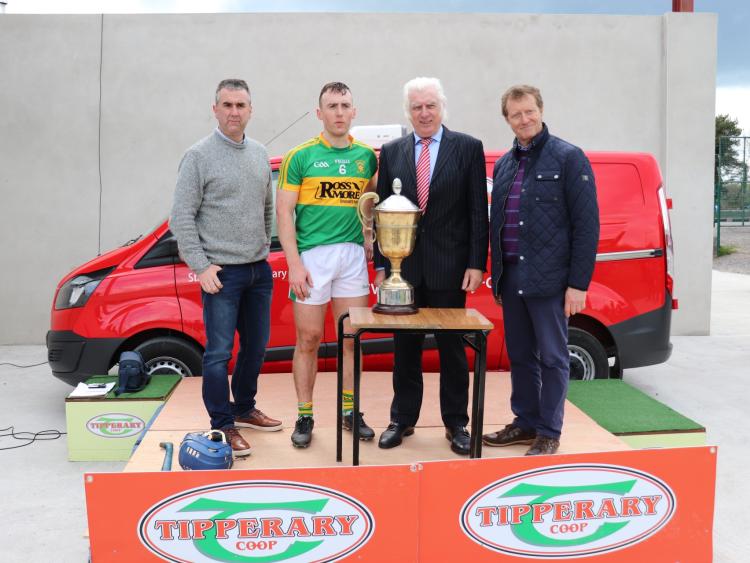 For the first time since 1995 the Gaels of West Tipperary travelled to Cappawhite for a West senior hurling final. On that occasion Cashel King Cormacs claimed their eighteenth title remaining on top of the roll of honour until Sunday in Cappawhite as Clonoulty-Rossmore took over at the top.

With little form to go on it was hard to pick the winner from the outset. It would though end up being a fairly even game with Timmy Hammersley having a huge impact on the final outcome when finishing with a final tally of 0-10.

Timmy Hammersley got the opening point of the game from play in the second minute, but it was Éire Óg who seemed hungrier in the early exchanges. Ronan O’Brien levelled proceedings before Seanie Ryan found a way around the Clonoulty-Rossmore defence to send the sliotar to the net. Ryan soon added two points from play and a free as Éire Óg opened up a five-point advantage after ten minutes.

The Clonoulty forwards were struggling to get a foothold on the game while Tom Fox was clearing a lot of ball and appearing all over the defence.

Éire Óg were sending in high balls on top of their full-forward line, but were failing to add to their dominance.

The teams then swapped points as Timmy Hammersley added another from play while Seanie Ryan responded with another free.

At this stage Timmy Hammersley had come out to operate around the half-forward line and he pointed another free. Donal O’Dwyer responded with another point from play for Éire Óg.

The tit-for-tat nature of scores continued as Michael Ryan and Seanie Ryan swapped points. Éire Óg were leading by five points with ten minutes of the half to play. Clonoulty-Rossmore came more into the game, but added just three points from Dillon Quirke, Timmy Hammersley (free) and John O’Neill. Donal O’Dwyer got the sole Éire Óg point during this period.

In injury time Sean Maher found his way in on goal, but failed to get his effort past Darragh Mooney.

Clonoulty-Rossmore were level within four minutes of the restart when Timmy Hammersley hit three points - two from frees to tie up the game for the first time since the opening minutes.

Darragh Mooney pointed from a long-range free and this was quickly followed by a Brian Fox point from play, but Éire Óg’s lead was short lived. Fiachra O’Keeffe and John O’Neill pointed within a minute to tie up the game for a third time. They were level for a fourth time when Seanie Ryan and Conor Hammersley swapped points.

The turning point of the game came in the final quarter. During a five-minute spell Clonoulty-Rossmore out-scored their opponents 0-4 o 0-1.

Darragh Mooney and Timmy Hammersley swapped points as the gap stayed at three points with three to play. Éire Óg got it down to one in injury time with a point from substitute Aidan Griffin and another Darragh Mooney free. They tried for the equaliser, but just failed to get proper possession and Clonoulty-Rossmore broke down the field with John O’Neill pointing.

Clonoulty-Rossmore will be happy to claim a nineteenth title - Timmy Hammersley scored half their tally, but they did add fourteen points from play.

Éire Óg Annacarty had their chances, but as the game went on they relied a lot more on placed balls with nine points of their final tally being accounted here.

Clonoulty-Rossmore took a while to get going, but were best served by Timmy Hammersley and Fiachra O’Keeffe in attack. Michael Ryan worked hard in midfield while John O’Keeffe was solid. James Ryan was switched onto Seanie Ryan and he curbed the latter’s effect on the game.

Éire Óg Annacarty were best served by Tom Fox who had a very solid game. Brian Fox tried hard as ever as did Conor O’Brien. Dinny Crosse got on a lot of ball in the first half while Seanie Ryan finished their top scorer with 1-6. Darragh Mooney had another solid game and his contribution from frees was huge.