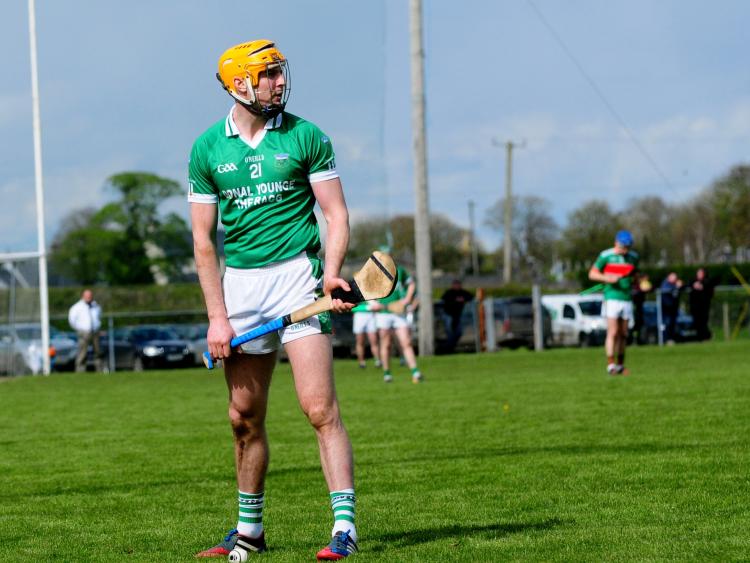 In encouraging news from a Tipperary point of view Séamus Callanan made his return to competitive action for his club Drom & Inch against Loughmore-Castleiney at Templetouhy. Photo: Eamonn McGee

Drom & Inch and Thurles Sarsfields will meet in the Roadstone Mid Tipperary Intermediate Hurling Championship final on Saturday, May 5th at Templemore (throw-in 6pm) - on Sunday last Drom & Inch beat Gortnahoe-Glengoole (1-15 to 2-10) in the semi-finals while Thurles Sarsfields earned a narrow win over Moyne-Templetuohy (1-15 to 0-17).

The West Tipperary Intermediate Hurling Championship semi-finals featured a win for Cashel King Cormacs (2-18 to 1-13) over Cappawhite while Seán Treacy’s beat Knockavilla Kickhams 1-18 to 2-13. The West intermediate final is scheduled to take place on Sunday, May 6th in Golden at 3pm.

Borrisokane and Ballinahinch will meet in the North Tipperary Intermediate Hurling Championship final on Saturday, May 5th in Toomevara (throw-in 7pm) - last weekend Ballinahinch beat Shannon Rovers 0-21 to 0-19 after extra-time. Borrisokane, who beat Kiladangan (1-18 to 1-15) in the quarter-finals, saw off the challenge of Moneygall on Saturday (2-13 to 0-16).

In the South intermediate hurling semi-finals Ballybacon-Grange beat Moyle Rovers (0-14 to 0-11) while Carrick Davins proved too strong for Kilsheelan-Kilcash (5-11 to 3-5).

In the North semi-finals Kilruane MacDonagh’s face Toomevara and Kiladangan meet Nenagh Éire Óg - those games will not be played until the inter-county season reaches a conclusion.

The Centenary Agri Mid Tipperary Senior Hurling Championship quarter-finals took place last weekend when the defending champions Thurles Sarsfields survived a spirited challenge from Upperchurch-Drombane at Templetuohy (1-19 to 1-16). At the same venue Loughmore surged into the semi-finals thanks to a ten-point win over Drom & Inch (0-27 to 0-17). Meanwhile JK Bracken’s saw off the challenge of Clonakenny (2-23 to 1-13) while Holycross-Ballycahill proved too strong for Moycarkey-Borris (2-18 to 1-11) at The Ragg.

Four quarter-finals also took place in the Hibernian Inn North Tipperary Senior Hurling Championship over the weekend - on Saturday in Nenagh Toomevara beat Portroe 3-15 to 0-17 while Dolla hosted a double header on Sunday - Newport struggled to contain Kilruane MacDonagh’s (0-11 to 1-19) while an opportunist goal from Darragh Egan helped Kiladangan to beat defending champions Borris-Ileigh (3-12 to 1-16). Meanwhile on Sunday evening St Michael’s Park in Toomevara played host as Nenagh Éire Óg saw off the challenge of Burgess (2-23 to 0-9).

Fethard hosted the semi-final meeting of St Mary's Clonmel and Killenaule in the Clonmel Oil South Tipperary Senior Hurling Championship on Sunday for the right to face Mullinahone in the decider - Killenaule won that encounter 1-23 to 0-18 with John O’Dwyer notching the three-pointer.