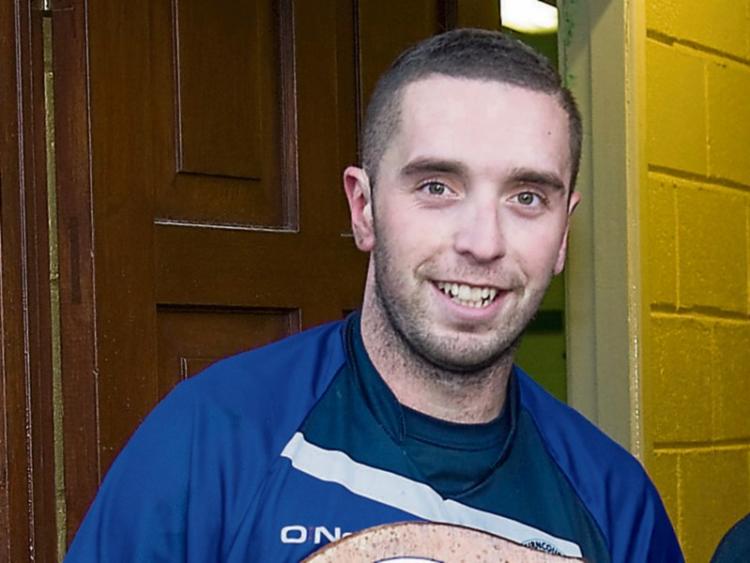 Kieran O'Dwyer who was on the mark for Burncourt Celtic in the 4-1 win over local rivals Suirside on Sunday last.

This was a local derby with a huge amount at stake for the visitors as they were trying to secure enough points to steer themselves away from the relegation battle. And although they did have to come from behind Burncourt did that in emphatic fashion in the end.

The home side started well and were on the front foot against a tentative Celtic side. Suirside finally made that pressure count in the fifteenth minute when Pa Fitzgerald opened the scoring with a very clever finish from close in.

They dominated possession after that and looked like they would take a single goal lead to the break, but were caught napping in the forty third minute when Celtic equalised with a goal from Kieran O’Dwyer.

And like waiting for busses when one goal came another followed shortly afterwards and Niall Halley put the visitors a goal ahead with a score in injury time at the end of the half. The game was poised on a knife edge after that and the tense nature made for a dour second half.

That was how it stayed until 16 minutes from time when the visitors scored a third through Pa Ryan, and only minutes later made absolutely sure of the vital points when Alex Meaney got the fourth and final goal. St Nicholas  were in dire need of the three points here on Sunday and will be disappointed to have given up a two goal lead to a Kilsheelan side who were also looking for the win but for different reasons.

The home side started smartly and were well on top early on. They finally opened the scoring in the 25th minute when John Joe O’Brien converted a 25 yard free kick.

This was the only goal of the first half, although the home side missed some excellent chances to build on their good start.

They finally did that early in the second half when Philip O’Doherty crossed for Chris Kirby to excellently volley home.

This looked like being the important score of the game but instead it started a fight back from the visitors who got back into the game when Simon O’Donnell scored in the 65th minute.

Ten minutes later Kevin Gunne completed the comeback with a tap in after some excellent build up play. Despite both sides needing the points and both going for them, neither could find that necessary piece of quality and at the end of the game, the spoils were shared.

Cahir Park and Vee Rovers are going up to the Premier League!

League leaders Peake Villa travelled to Donohill for their final game of the season and totally dominated their hosts from start to finish on a bright Sunday afternoon.

From the start the visitors had all the possession and had numerous chances to take the lead before finally taking the lead through a Kevin Croke header at a corner kick. This opened the door for the visitors and they doubled their lead shortly before the break when a Davy Bourke effort was spilled at the feet of the keeper and Kieran Hennessy fired to the net.

Villa continued to dominate the second period and went four up to effectively kill off the game with two quick fire efforts from Hennessy and Eoin O’Dwyer.

Hennessy completed his hat trick and O’Dwyer joined in with a hat trick of his own to make it seven on the day and a perfect way to cap their season.

They must wait now on other results to see if they will be going to the First Division as champions over the next few weeks.