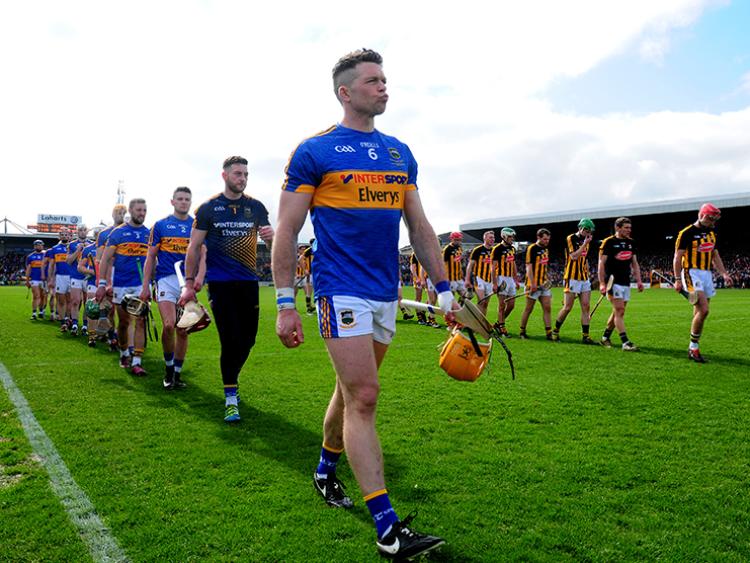 Pádraic Maher pictured leading Tipperary through the parade prior to the recent, and disappointing, Allianz National Hurling League final defeat suffered at the hands of Kilkenny. Photo: Eamonn McGee

Fact or fiction: was the lack of a progressive game plan the root cause for Tipperary’s collapse at the hands of Kilkenny in the recent Allianz National Hurling League final? Answer: yes and no. The side managed by Michael Ryan did not use the ball in a progressive way nor did the Tipperary team work hard enough.

The Premier County progressed to the league final following a campaign which featured plenty of new faces. Manager Michael Ryan had flagged his intention to blood new players, but there is no ignoring the fact that Tipperary performed like a cheap battery in the decider. Observers can talk all they like about the fact that the Tipperary team featured a bunch of novices, but so did Brian Cody’s Kilkenny. And, the Cats did the work required to win the league final while Kilkenny also employed a far more progressive style of play.

So, it’s time for Tipperary supporters to be fed some statistical information like medicine - hold your nose and swallow it.

Tipperary lost the league final by six points (2-23 to 2-17) and only scored 0-1 from play in the second half - the visitors to Nowlan Park, Kilkenny fired a single wide during that period, converted a sideline, saw another sideline drop short and also conjured a couple of goalmouth flurries, most notably when John O’Dwyer saw a goal chance saved.

Surprisingly enough Tipperary won 56% of the Kilkenny puck-outs over the course of the entire contest and 69% of the Premier County’s re-starts during the opening half. In the second half, however, Tipperary won just 17% of their own puck-outs (three from a possible fifteen) - winning 55% of your own puck-outs, irrespective of the prevailing conditions, would be regarded as par. We do not, however, lay the blame for this issue at the feet of goalkeeper Daragh Mooney - the Éire Óg Annacarty man appeared to lack options or a varied game plan that he could lean on.

Work rate was also an issue for the Tipperary team in the league final - the Premier County, for example, lost the turnover-in-the-tackle battle 19-24 (9-14 in the second half); Tipperary also lost the contest for ruck ball 16-18. The graphic above illustrates the work rate ratio scores for the respective sides in the league final.

Over the course of the entire game Tipperary earned a work rate ratio of 3.57 which is poor (Kilkenny 2.78). In the first half Tipperary’s work rate ratio came in at 4.3 while it was 3.0 in the second half. Meanwhile Kilkenny scored 3.19 in the first half and even though Brian Cody’s men were playing with the wind post-interval the home side made sure to ramp up their tackle rate to a respectable 2.43.

Neither team reached an elite level in terms of work rate, but, and most obviously, Kilkenny were far more eager to get through the work required to win this national final.

What probably irritated educated observers of the contest at Nowlan Park was Tipperary’s use of the ball. Shane Stapleton, for example, discussed the issue with significant authority on the Off The Ball AM show - you can listen to the Borris-Ileigh man’s thoughts on the subject once more by clicking here (skip to 43.50 minutes).

At one stage of the discussion Shane Stapleton, who has won back-to-back All-Ireland club titles with Cuala (Dublin), bemoans Tipperary’s approach play which featured “50-50 long ball going into the forward line”.

“Tipperary are just constantly lumping the ball to the forward line - if you have a good ball why would you turn it into 50-50 possession. And, Tipp are just doing that time after time. And, in the second half they broke down so badly that they only managed four shots from play; they were so bad they only managed one wide . . . when Kilkenny win the ball, and they are now working the ball up the field as we know, they are evolving whereas Tipperary, I can say we because I am a Tipperary man, are just driving the ball long which means that they (Kilkenny) can just sit back and wait for it. So, Kilkenny are moving it up through the lines - they are trying to burst out and hit space with the ball or hit it high on top of the right player,” Shane Stapleton explained on Off The Ball AM.

Meanwhile Shane Stapleton used the specific example of Willie Connors (Kiladangan) to illustrate how the Tipperary game plan did not suit their personnel.

“Tipperary have got Willie Connors - a young guy coming in who was one of the good performers yesterday, but it is his second game for Tipp - and they are hitting high ball, hanging on top of him. And, it doesn’t suit him. You see, he played quite well, but if you’re Willie Connors you want low ball and you want it hitting grass in front of you; turn your man and go at him. Paddy Deegan (Kilkenny) had a great game at corner-back, but his dream would have been: can Tipperary hit high ball with snow on it down on top of me, constantly? And, they did exactly what Kilkenny would want,” Shane Stapleton said.

Those numbers are not the logical recipe for a rout and yet Tipperary lost this contest by some distance - Jason Forde’s goal in the second half from a 21-yard free spared their blushes while blue and gold supporters were treated to match reports couched in the terms of a medical bulletin.

Despite enjoying a similar level of possession Kilkenny pieced together a vastly superior quality of attack.

So, this defeat appears to point to a more essential deficiency in the preparation of the Tipperary team than the mere vagaries of form would suggest.

Remember too: Tipperary employed a similar style of approach play against Limerick in the league semi-final; going by the chances created in normal time the Premier County could very easily have lost that contest (shot count: 34-41).

In the league final Kilkenny looked like a team with an idea of what they wished to achieve once in possession of the ball against a team with no idea or, at least, a very limited one.

What trap, for instance, do you think Tipperary were trying to set for the opposition?

The traditionalists who proclaim that they “don’t do tactics” are fooling themselves - “no tactics” is actually a tactic; it is a choice to not make a choice.

When you send out a bunch of players to play no-tactics hurling that does not mean that the management has chosen nothing. Instead, the management team involved has opted to commit their side to hurling chaos; the management team suffers an intellectual defeat when basing a game plan on individual player talent and the break of the ball.

In the league final Tipperary did not adopt what would be regarded as a progressive game plan. Instead, the players lamped the ball down the field at the very first opportunity. In contrast Kilkenny worked the ball short out of the contact area before moving it forward in a considered way and to the advantage of their forwards.

There are, potentially, two issues at play here: either the Tipperary players were sent out armed with no game plan or the players ignored the game plan completely. Indeed, it is hard to know which is more serious.

And, if the game plan is to bang the ball forward and play like a group of kids kicking a can down the road one would presuppose that the Tipperary forward line would feature players who have a talent for catching said booming clearances.

Now, the issue with the application of hurling tactics is that because teams have become so sophisticated less talented sides can beat more talented opponents by dint of a well-executed strategy.

Here, for example, is a striking argument: did the more talented team lose the recent All-Ireland club hurling final?

Na Piarsaigh lost the replayed final to Cuala (2-17 to 1-17), but over the drawn and replayed contests the Limerick champions led the shot count 49-38. Cuala led the free count 37-15 and although the Dublin outfit worked marginally harder (2.76 to 2.9) Na Piarsaigh edged the turnovers-in-the-tackle 46-42.

Essentially, Na Piarsaigh were less structured in their play and paid dearly for it - the Limerick lads’ passing success rate was a poor 69% (Cuala 77%).

Cuala were set-up by manager Mattie Kenny (Galway) to counter-attack the opposition and did so with absolute glee during the drawn and replayed All-Ireland club finals with a reeling Na Piarsaigh defense forced to cough up the world of frees.

Imagine: the choice you make in terms of style of play can present the opposition with the exact platform that they require to beat you? In those circumstances, in a sense, you are in most danger when you are actually in possession of the ball.

The hope, of course, is that Tipperary will learn significant lessons from this experience.

A direct back-to-front style will not maximize the talent of the Tipperary players nor will it succeed against an inter-county side which has been progressively coached.

The question is now whether the Tipperary management can successfully diagnose the issues associated with the team’s performance and do something sensible about it.