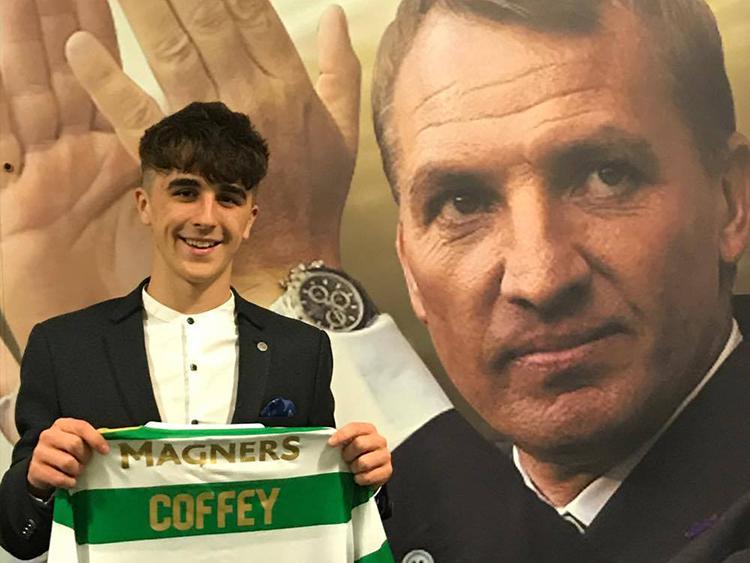 Nenagh’s Barry Coffey pictured on the day that he signed with Glasgow Celtic.

On Saturday, May 5th at 5.45pm the Republic of Ireland under-17 team, which features Nenagh’s Barry Coffey, will launch their UEFA European Championship finals campaign against Belgium at the Loughborough University Stadium (kick-off 5.45pm) - England host the tournament from May 4-20th.

The Republic of Ireland compete in group C and following this evening’s contest with Belgium Colin O’Brien’s side will face Denmark at St George’s Park on Tuesday, May 8th (1pm) and then Bosnia, also at St George's Park, on Friday, May 11th (1pm).

The top two from each group will progress to the quarter-finals (May 13-14th) while the semi-finals take place on May 17th and the final on May 20th.

ITV will broadcast games live during the group stage and knock-out phase of the competitions while UEFA will also stream many of the games live on Youtube - please click here for more details.

Colin O’Brien’s under-17 squad will face into the tournament as a top seed and with confidence following an impressive qualification campaign during which the Republic of Ireland won six games from six (all away from home) and scored eighteen goals.

Coffey featured on the Nenagh AFC junior side which came within a point of winning the Limerick District League Premier Division last season while Barry also inspired Nenagh AFC to a first-ever FAI Under-17 Cup title in 2016.