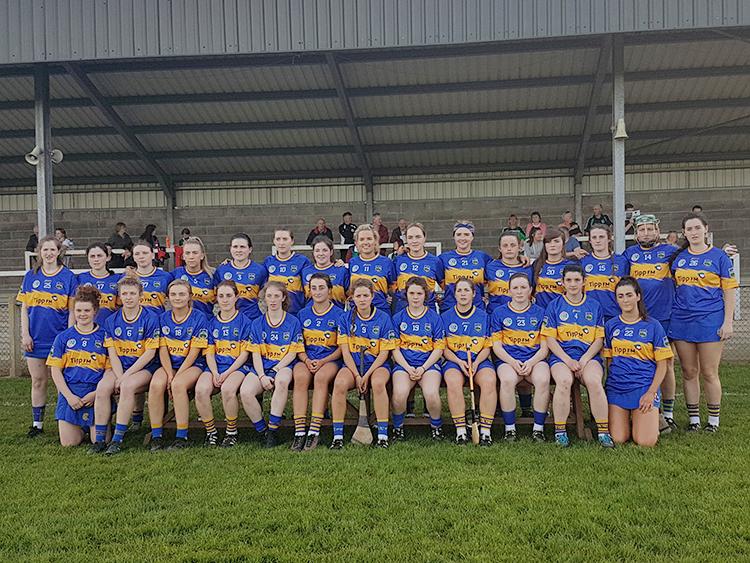 The Tipperary senior panel of players pictured at The Ragg on Saturday evening.

In a rousing display the Tipperary senior Camogie team surged into the provincial final for the first time since 2015 thanks to an eleven-point semi-final win over the defending Munster champions Limerick at The Ragg on Saturday evening.

In 2017 the Premier County had suffered two championship reversals at the hands of the Shannonsiders - Tipperary lost to Limerick in a Munster semi-final (0-14 to 1-14) and in the All-Ireland series (3-12 to 1-20) - but the performance of the Bill Mullaney-managed outfit in Saturday’s semi-final suggests that this group of players have turned a significant corner. And, the prize for Tipperary is a place in the Munster final against Cork at Páirc Uí Chaoimh, Cork on Sunday, May 20th as a curtain-raiser to the Munster senior and minor hurling championship clashes between Cork and Clare.

And, Tipperary should have no qualms about facing the defending All-Ireland champions in their own back yard. Tipp worked incredibly hard against a well-regarded Limerick team on Saturday. Indeed, there was a real edge to the Tipperary tackling and although it led to cautions for Karen Kennedy and Ereena Fryday in the opening half the Premier County set the terms and conditions of this contest right from the first whistle. The work rate of the half-forward line (Ciardha Maher, Orla O’Dwyer & Sarah Fryday) was especially eye-catching and the determination of this trio had a huge impact on this contest.

Limerick started well and led 0-2 to no-score after six minutes before Orla O’Dwyer landed two terrific points to tie the game. A superb diagonal ball from Róisín Cahill picked out the run of Cáit Devane in the ninth minute and the full-forward fired the home side into the lead for the first time. Devane added another point soon after before returning the favour when recycling the ball to Róisín Cahill in the 15th minute - Tipperary had now scored five points without reply and led 0-5 to 0-2.

In response Niamh Mulcahy converted three consecutive Limerick frees to tie the game by the 21st minute, but Cáit Devane traded a brace of frees with her Limerick counterpart soon after and with twenty-nine minutes played the sides were level (0-7 apiece).

Tipperary, however, closed out the opening half impressively and led 0-12 to 0-7 at the interval thanks to efforts from Orla O’Dwyer, Cáit Devane (three, one free) and Casey Hennessy. Hennessy’s point in the 32nd minute was especially eye-catching - the Clonoulty-Rossmore corner-forward hooked a Limerick defender and played a smart one-two with Cáit Devane before landing a right-handed shot.

Inside the opening thirty seconds of the second half Tipperary were celebrating a goal - Mary Ryan’s long-range free found the hand of Cáit Devane; the full-forward laid the ball off to Grace O’Brien and the Nenagh Éire Óg star buried her shot. Tipperary then added four more points to their tally and led 1-16 to 0-7 with forty minutes played - Cáit Devane (two, one free), Casey Hennessy and Mary Ryan were responsible for these scores.

The Mary Ryan strike was especially noteworthy since the left wing-back made an off-the-shoulder supporting run from her own half expecting to get the ball; possession was recycled into the hand of the Moneygall player and Ryan drilled over a rousing effort.

Limerick scooted in to score a goal of their own through Rebecca Delee in the 42nd minute and added a converted free soon after before Tipperary responded through Casey Hennessy and Cáit Devane (two, one free).

In the 46th minute ‘keeper Sarah Quigley conjured a fine save to deny Aisling Scanlan a goal before Limerick added three points to their tally from play and had the home side’s lead down to eight points (1-19 to 1-11) by the 48th.

Two Casey Hennessy points settled Tipperary in the 50th and 52nd minutes before a converted Niamh Mulcahy free preceded Hennessy’s sixth point from play in the 56th. And, there was still time for Grace O’Brien and Cáit Devane to add to the Tipperary tally before Rebecca Delee brought the scoring to a conclusion in the 59th minute.