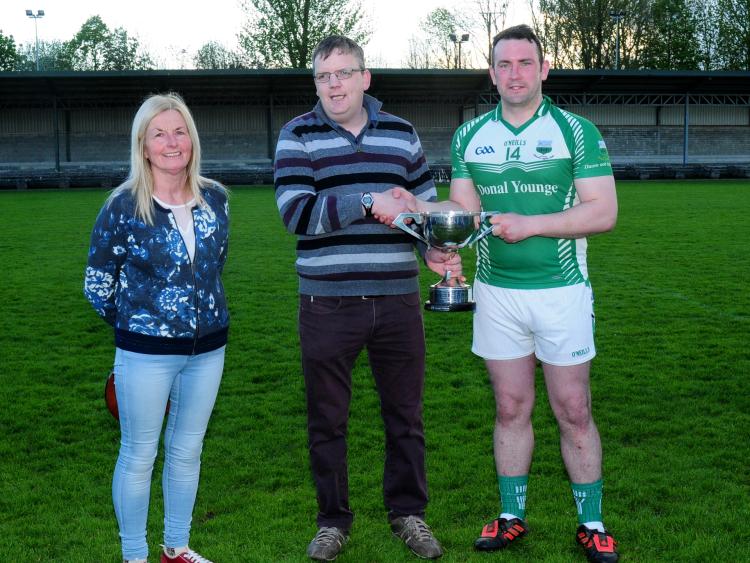 The inclusion of former hurler of the year Lar Corbett in the Thurles Sarsfields forward line was not enough to stop Drom & Inch from claiming the Roadstone Mid Tipperary Intermediate Hurling Championship title at Templemore on Saturday evening whenthe lads from The Ragg were full value for their four-point win in a closely-contested game.

Absent due to business when Sarsfields began the defence of the Mid senior championship last week, the former All-Star was therefore eligible to play at the lower grade. Though he showed some deft touches, he did not score and the Drom contingent, who were more physical and determined in their play, carved out a result that guarantees them involvement in the closing stages of the county championship.

In ideal conditions, and with both sides containing a liberal sprinkling of players with senior experience, a cracking game was in prospect, but while it was an absorbing contest and with an edge to it at times it never developed into the cracker anticipated.

There was not a lot in it with defences on top at both ends and the decisive period came as early at the opening eleven minutes when Drom & Inch shot into a four-point lead (0-4 to no score) - an advantage that saw Sarsfields subsequently chasing the game and with Drom doing just enough to keep their noses in front.

Sars had enough of the ball, but an under-performing forward division made little headway.

Drom had an edge in that department reaching the break with a 0-8 to 0-4 advantage - Seamus Butler (two), Paul Kennedy and Donncha Kennedy added points while Seanie Butler was Sarsfields only scorer in the first half with three of his four points coming from frees.

Sarsfields might have taken heart from the fact that despite so low-key an opening half they were still very much in the game, but against a very determined Drom rearguard scores were not coming cheaply and so it transpired in a second period which was similar in pattern to that which went before it.

After eight minutes Sarsfields had cut the deficit to three points, Kevin Butler, who was having a big game for Drom, initially pointing for them to which Seanie Butler responded with two frees for Thurles.

In the 40th minute Sarsfields had a great chance when Conor Lanigan broke through, but he lost his hurley and his kicked attempt at goal was well-saved by Drom’s Eoin Collins. What a goal then would have done for Sarsfields is anybody’s guess, but, instead, Seamus Butler fired over two more points from frees to ease Drom toward a five-point advantage.

Once more Sarsfields came at them with Seanie Butler (two frees) and Tommy Doyle hitting points to bring them within two of their rivals by the 52nd minute.

The game was still within grasp for Sarsfields if they were good enough, but Drom were not giving ground, Donncha Kennedy hitting a great point.

Drom lost Paul Kennedy to a red card with four minutes to play, but Seanie Butler was off target from the resulting free. Two minutes from time Aidan O'Meara put the game beyond Sarsfields’ reach with a fine long-range point from a free to leave Drom both delighted and deserving champions.

Following some indifferent performances at senior level, this was a great boost for morale in the Drom & Inch club and the challenge for them now will be to retain as many of this group as they can for this grade despite the demands of the senior squad.

They have a wealth of experience in the side with more than half of them having tasted action at senior level and if they can sharpen up a bit in front of goal, they will take a lot of beating in the county competition.

In a rock-solid defence Eoin Collins was very confident in goal with Mike Costello and Martin McGrath prominent. The Kennedys, Donncha and Paul, Seamus Butler, Eamon Buckley, and Mikey Connors also had fine games with Kevin Butler doing an awful lot of work at midfield.

Sarsfields were without suspended former senior Michael O'Brien and his loss was felt in a disappointing attack. They also lost full-forward Dylan Bourke to injury early in the game.

However, they scored only two points from play in the entire game which is certainly not the kind of form to win championships and so they can have no complaints.

David Corbett was excellent at half-back with Aidan Ryan and Michael Purcell also to the fore. Tommy Doyle worked hard throughout with Seanie Butler the main source of scores.