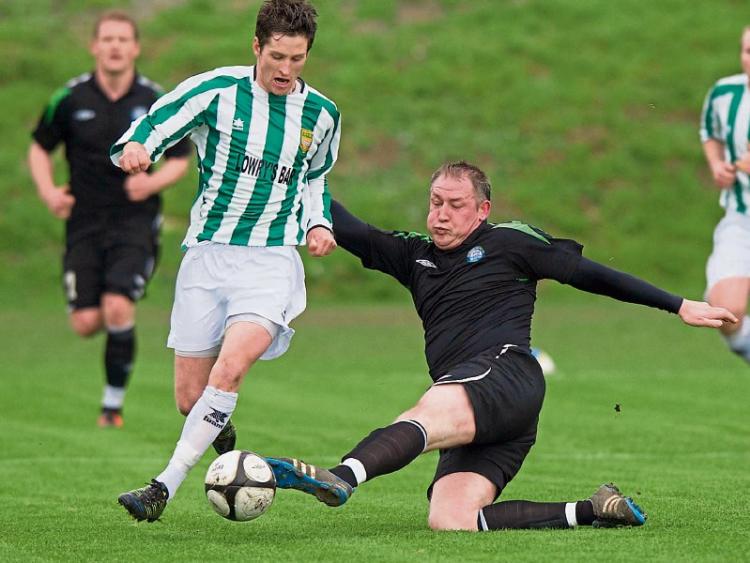 St Michael’s took a huge step towards retaining their TSDL Premier League title when they gained a narrow win over their closest rivals in a highly anticipated local derby at Cooke Park in glorious sunshine on Wednesday evening.

The Tipperary Town side maintained their  100% record in the Premier League with a battling performance against a Bansha Side that pushed them all the way in an intense dogged encounter.

The visitors showed that they were not going to be intimidated by either the surroundings or the fact they had come off the worst in a recent Cup game and produced the first chance of the game when Bernard Fitzgerald shot straight at Adrian Walsh after only four minutes.

Fitzgerald got in behind the home defence again in the 13th minute and his cross saw Niall Daly's left foot shot saved smartly again. But as is often the case with this Saints team, they show an uncanny ability to soak up pressure and then strike like a cobra the second their opposition leave their concentration drop.

The home side got the all-important first goal in this game in the 20th minute when Alan O’Dwyer got behind the visiting defence to shoot. Although this shot was saved, it was only parried by Bob Doyle into the path of Colin Bargary who was on hand to score from the rebound.

The home side lost Richie Ryan to injury on the half hour and he was replaced by Rodrigo Goncalves, who almost set up Shane Ryan five minutes before the break, but his headed effort went narrowly wide.

The home side then had a huge let off three minutes before the break when a through ball saw Niall Daly through on goal but he was unlucky to see his shot come back off the post. He then gathered the rebound and squared to Shane Egan who blazed over from six yards.

Celtic continued to probe and a minute into the second period Tony Egan hit the over the bar Walsh had punched away a cross.

The game however fizzled out a bit at times with the ball in the air a lot and played aimlessly over and back around the midfield area. Chance began to be taken from longer distances out and none really troubled either keeper. The Saints Alan O’Dwyer did well ten minutes from time to make space when he cut in but his pass was just too long for Goncalves and the chance went abegging.

Two minutes from time the home side had the final chance of the game when David Slattery played in Ollie O’Driscoll but Bob Doyle got a touch to take it off his foot, and knock the ball away.

In the end St Michael’s will be happy with the result after some very disheartening scorelines of late. The win makes the favourites to pick up the league again in the weeks ahead, but Bansha Celtic will be very happy with what they have already achieved this season, and have a solid base now to build on in the seasons ahead.

The last action of note from this game though, was reserved for the memory of a great Bansha Celtic supporter, Eamon Heney who passed away during the week. Through many small and big actions Eamon has been an important part of the Celtic club since its foundation, and it was only proper that his contribution was remembered and celebrated on the night.

Old Bridge gave themselves a real fighting chance of remaining in the Premier Division next season when they travelled to Tipperary town last Wednesday evening and put on one of their best displays of the season to take the three points.

The visitors were at it from the off and pressured the home side at every opportunity in the early part of the game. This eventually lead to the Bridge making the breakthrough, and when one goal came along a second followed closely after with Ian Cleary hitting a brace to give his side a two goal lead.

Things got better ten minutes into the second half when Aaron Arrigan struck to make it three and the points were assured when Chris O’Gorman hit a fourth, as the small but dedicated Bridge support celebrated.

Two late strikes from the home side through the two Darrens, Neville and Stokes took the bare look off the home score, but in the end this was a fully deserved win for a much hungrier Old Bridge outfit.

Old Bridge and Glengoole United are battling it out for survival in the Premier League and meet in a crucial six-pointer on Sunday next. With both having just one game remaining thereafter (both have to play St. Michael’s), the result of Sunday’s game will go a long way to determining who will be in the top flight next season and who will drop back down. As it stands ‘The Bridge’ and Glengoole United are also level on points. So it is all to play for in Glengoole on Sunday at 3 pm.