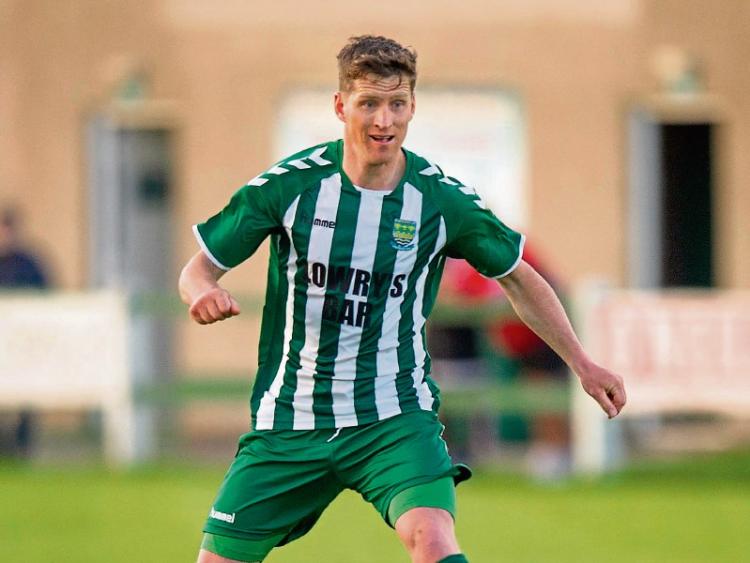 Colin Bargary, introduced as a sub on the hour mark, still managed to net a hat-trick for St. Michael's in their 7-2 win over Tipperary Town on Saturday last. The win assured the Saints of the title.

St Michael’s won their fourth Premier League title in-a-row at Cooke Park, Tipperary  on Saturday evening last when they put local rivals Tipperary Town to the sword, but this game was a lot closer than the scoreline suggests for the majority of the tie.

It was a contest for an hour until a double substitution bringing in Colin Bargary and Joey O’Dwyer saw the home side hit another gear and overrun a gallant Tipp Town side over the last 30 minutes or so.

The visitors were rocking however as early as the third minute when Vinny Godfrey got in on goal after rounding Adrian Walsh. But his shot from an angle seemed weak and James Walsh who looked certain to clear only managed to bundle the ball over his own line for an own goal.

A Brian Nugent free kick for the visitors on 22 minutes saw Markie Roche head back but straight at Aido Walsh as the home side seemed to be fluffing their lines as regards picking up a title in this game.

But they settled down and in the 33rd minute Shane Leahy levelled the game at 1-1 when he was on hand to finish a Chris Higgins cross to the net.

A minute later Leahy was unlucky when his downward header bounced and looked to be in the net but Tony Black somehow got a hand to it to keep it out.

Tipperary Town the almost regained the lead two minutes before the break when Godfrey crossed for Stephen Quinn who saw his header crash off the bar, and in the scramble that followed Quinn was injured with  Town claiming a penalty that was not given. And to add insult to that injury, Saints went straight down the field to see Shane Leahy’s pass find Ollie O’Driscoll who scored from six yards out to leave it 2-1 at the break.

The visitors made up for their perceived injustice two minutes into the second half when Darren Stokes found himself in space on the left and his shot from an angle nestled in the top corner of the net to level the game at 2-2.

The game changed completely just before the hour mark when Saints brought in Bargary and Mulcahy. They went ahead when John O’Brien's cross saw Bargary send a looping header over Tony Black in the Town goal, and made it 4-2 when another O’Brien cross saw Bargary again place a header to the corner of the net.

Colin Bargary made it seven in the final minute with a thundering shot for his hat trick and the final whistle saw Saints easy winners, and League champions once again.

Both these sides will be looking forward to their upcoming Tipperary Cup final on this coming Friday night in Clonmel, but they played out an entertaining if ultimately scoreless League game un Cooke Park last Wednesday evening.

It was a battling display by the Clonmel side, as the Saints always had more territorial possession but lacked a finish to their build-up play. That said the first real chance of the game fell to the visitors when Jack Burke got behind the home defence before Adrian Walsh did well to come out and smother the ball.

In the 22nd minute a good move released Ollie O’Driscoll on the left wing and his cross saw David Slattery’s header go straight into the hands of Dylan Power.

It was largely a midfield battle with space at a premium, and neither side was able to produce anything of note before the break, going in scoreless.

A Jack Burke free saw Craig Condon head straight to Adrian Walsh three minutes into the second period on one of the few occasions when they threatened at all, but very quickly the game fell into a groove of the home side having most of the play, without being able to make it count on the scoreboard. Ultimately the game finished scoreless and Saints were left having to wait until Saturday to wrap up enough points to claim a fourth League title in a row.

The points “dropped” by St. Michael’s were the first they have lost all season in their march towards the title. With two games remaining against Old Bridge and Glengoole United, the champions will be hoping to complete their campaign undefeated.