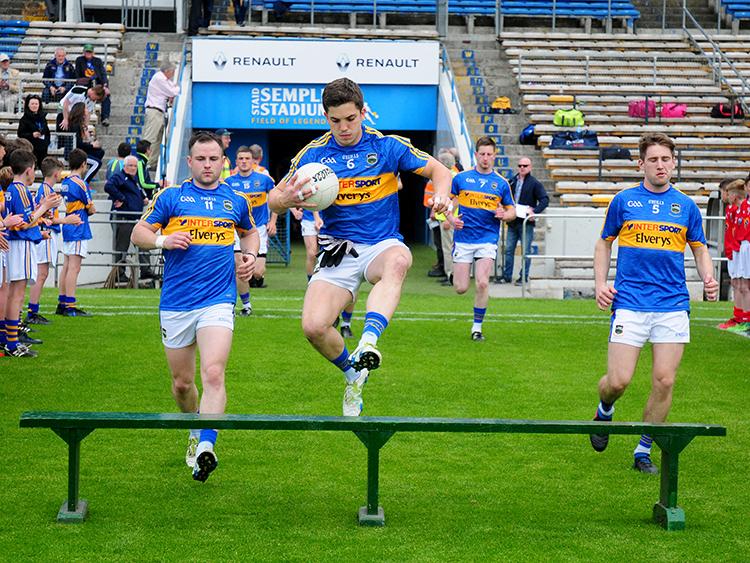 Captain Robbie Kiely pictured leading Tipperary out onto the field at Semple Stadium, Thurles prior to the clash with Cork on Saturday night. Photo: Eamonn McGee

“I still can’t believe it to be honest,” Shane Stapleton told the assembled media.

“I thought we were ready and I thought we were in good shape - I know a lot was made out of the six-day turnaround, but I thought the lads were mentally really fresh. I thought we had a good job done with them and the week went well. We thought that (Conor) Sweeney and Steven (O’Brien) coming back into it was going to be a big addition,” Shane Stapleton explained.

“But there is huge disappointment there now. The management, the coaching (team) and the players will now all have to have a long look at ourselves because that wasn’t good enough; that must have been a tough watch for the Tipperary supporters. It is going to be a long month now to try and get ready for the qualifiers.

“We have time, at least, on our side and, hopefully, the draw might be pleasant. If we can stay away from the big lads in the first round anything can happen,” Shane Stapleton said.

For a full match report on this Munster semi-final contest please click here.

Tipperary will re-enter the All-Ireland Senior Football Championship in the second round of the qualifiers when Liam Kearns’ men will be drawn as a losing provincial semi-finalist against one of the eight winners from the first round of the qualifiers on June 23rd. The Premier County will be required to progress through two qualifier rounds in order to qualify for the Super 8s.

Shane Stapleton is a key member of the management team which manager Liam Kearns has pieced together - Stapleton and Kearns work alongside selectors Brian Lacey and Paul Fitzgerald while Paschal Kellaghan also coaches the side.

“I thought the Cork tactics were excellent to be fair to them; they got numbers back and broke with great pace,” Shane Stapleton said.

“They looked really, really fresh and they hurt us. Jimmy Feehan was struggling with a glute in the first half and then Robbie (Kiely) picked up a dead leg. And, they just picked holes in our defence. They ran at us and (Luke) Connolly and (Colm) O’Neill and the lads inside are such a threat we were really, really struggling. I thought that half-time came at a good time for us. I don’t think Cork wanted half-time to come at all,” the Golden-Kilfeacle man admitted.

“We tried and tried and tried to get it back. We tried to fill holes and we put Foxy (Brian Fox) back in the backs; we brought on fresh legs and just ran out of steam. I don’t know (what happened) - it is just very, very disappointing.

“What did we hit: nine points? That’s not good enough for a team with the ability and the talent that we have. We just didn’t perform. I suppose a big thing was the chances in the first half; we had a couple of goal-scoring opportunities and we didn’t take them,” Shane Stapleton said.