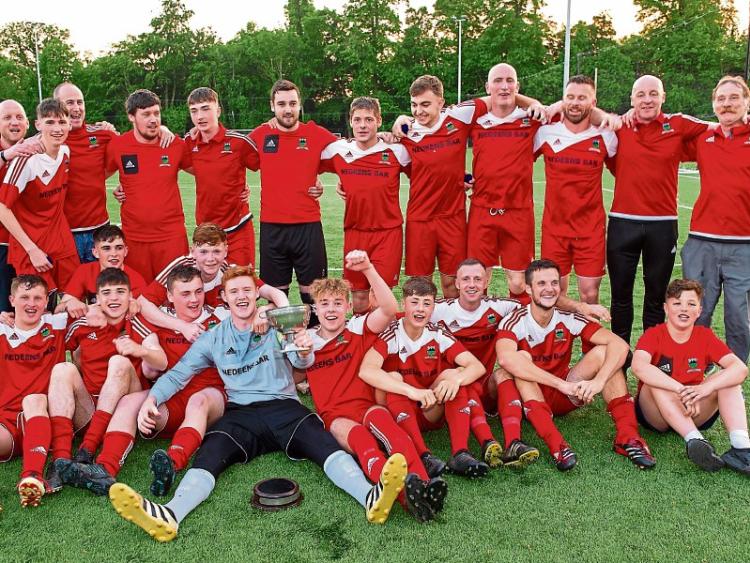 On a sun drenched Friday evening in Cahir, Vee Rovers added their second piece of silverware this season, to their promotion to the Premier League, but the circumstances of the win will have their supporters reminiscing for many a year to come.

They pulled off a smash and grab raid that would rank right up with some of the greatest heists in history, to come from two goals down and snaffle the silver from right under Villa’s nose.

The game itself was a cracker, with the Thurles sie more than playing their part. In fact for long periods of the game it was the Second Division side that held the upper hand and played the better football, knocking the ball around with aplomb against what was a very static Rovers performance.

Rian Hennessy's corner goes all the way to the net to make it 2-2.

And after a couple of early probes at the Vee defence, Villa took the lead in the eleventh minute when they worked an excellent move down along the right hand side before firing across the goal. The ball looked like it had been overhit but Eoin O’Dwyer soared in the air to head the ball back across goal and into the path of Kieran Hennessy to continue his goal scoring exploits this season and fire to the net from six yards out.

The celebrations were hardly over for the Thurles side, when their supporters had reason to cheer even louder. Four minutes later in fact, when again they tore the Rovers defence asunder with some quick movement, before the ball ended up at the feet of Kevin Croke and he doubled Peake’s lead.

Vee were in all kinds of bother at this stage and only fashioned one real half chance of the half from a corner kick when after being headed out, Kieran Macken fired in a shot from outside the area that barely tested the keeper.

The rest of the half played out in similar fashion with Vee only looking very one dimensional as the lower league team ran the centre of the field, but a significant turning point came a minute from the break when Villa were reduced to ten men after a rash tackle.

A man less in the second half the Thurles side didn’t seem to look like they were missing the man as they started the half on the front foot again. They did however get a warning of what might come when ten minutes into the half a deep cross from the right eluded the Villa defence and was headed onto the crossbar by Dylan Walsh.

Vee slowly but surely began to get more field position and the effects of the warm evening and long season began to show in the legs of the Thurles players. But they looked like they sealed the game 20 minutes from the end when Hennessy was put through on goal again Rovers keeper Thomas Quirke only to see the young shot stopper make an brave and wonderful save to keep his side in the game.

A number of substitutes were made with 15 minutes to go, and these fresh legs really stretched the Villa back four, and also changed the score as with seven minutes left a cross into the area was headed home by Dave Hyland to cut the deficit to one.

If that was bad for a now visibly tiring Villa side, things got even worse two minutes later when another substitute, Rian Hennessy, went to the left hand side to take a corner kick, and the cross into the box eluded to end up in the net and make it 2-2.

Completely shell shocked now the Thurles side were on the ropes, but looked to have escaped the knockout blow when they cleared a ball off the line with two minutes left of the watch.

But it was only a brief respite, as in the final minute of normal time Rian Hennessy showed a clean pair of heels to his marker and fired the winner across the face of the goal and into the net to spark off wild celebrations amongst the sizeable Vee Rovers crowd.

A small club with a big heart might be a good way to describe this Vee side, but they were more than capable all year of showing that they deserve their spot at the top table of Tipperary football.

Next season will be highly anticipated now.