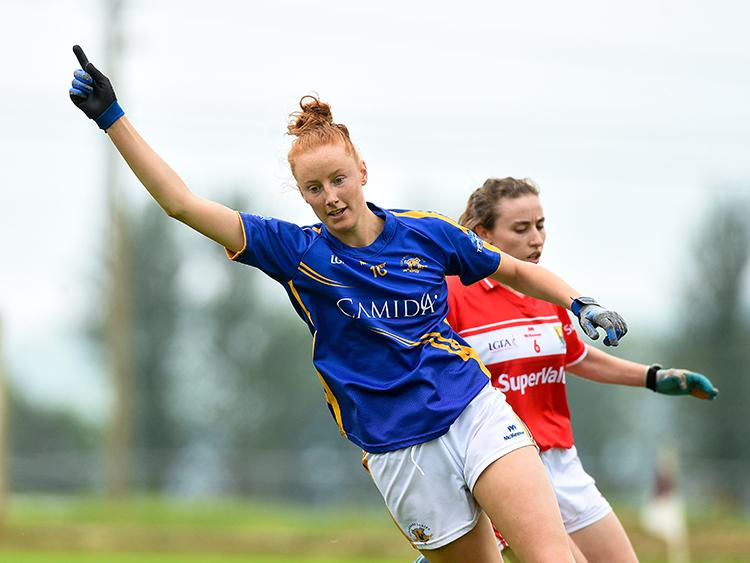 Tipperary came up just short against hot favourites Cork in an entertaining TG4 Munster Senior Ladies Football Championship semi-final played in Ardfinnan on Saturday. The Premier County had their moments in this contest and were left cursing a handful of spurned goal-scoring opportunities which may well have transformed the trajectory of this clash.

Shane Ronayne’s fast-improving team hoped to reach the Munster senior final for the first time since 1982, but Cork were good value for their win on this occasion. Indeed, the Rebels were a touch more composed on the ball throughout this semi-final while their powerful running game was an eye-catching aspect to this game.

Thanks to a cracking Aishling Moloney goal the sides were level (1-2 apiece) with twelve minutes played, but Cork surged four points clear prior to the interval (1-5 to 2-6). Indeed, the Rebels led 2-12 to 1-7 before Tipperary rallied late on in a desperate bid to rescue their provincial campaign. Ultimately, the Premier County came up short, but there were plenty of positives to take from this contest. As per usual Tipperary gave this contest every ounce of themselves and refused to give in. Aishling Moloney was terrific while Bríd Condon, Caoimhe Condon and Mairéad Morrissey had their moments. And, spare a thought too for teenager Anna Rose Kennedy who despite only recently breaking into the team the Aherlow native was excellent.

Another key takeaway from this semi-final was the fact that ladies football is a fabulous spectacle - this really was a terrifically entertaining game.

Bríd O’Sullivan punched home a Cork goal as early as the second minute, but Tipperary responded brilliantly within seconds when Mairéad Morrissey set-up Aishling Moloney for a terrific three-pointer - the Cahir star buried her shot in the bottom left hand corner.

Tipperary took the lead in the sixth minute when Orla O’Dwyer created a shooting opportunity for Aisling McCarthy and then, in the eighth minute, McCarthy played in Aishling Moloney and Moloney fired the home side into a two-point lead (1-2 to 1-0).

Cork, in an illustration of their extraordinary pedigree, then hit 1-3 without reply to take control. Points from Libby Coppinger, Orlagh Farmer and Doireann O’Sullivan earned a narrow lead for the Rebels before Hannah Looney buried a penalty in the 13th minute (1-2 to 2-3).

A brilliant individual score from Aishling Moloney in the 19th minute roused Tipperary, however, and when Aisling McCarthy converted another free three minutes later the Cork lead was down to two (1-5 to 2-4).

This contest appeared to have arrived at a critical juncture in the 26th minute when Mairéad Morrissey created a goal-scoring opportunity for Aisling McCarthy, but Cork ‘keeper Martina O’Brien saved brilliantly.

Two Orla Finn frees brought the opening half to a conclusion (1-5 to 2-6). Tipperary’s Aisling McCarthy pictured on the ball against Cork on Saturday. Photo: Sportsfile

Cork dominated the third quarter with successive efforts from Doireann O’Sullivan, Eimear Scally and Ciara O’Sullivan opening a seven-point gap between the sides (1-5 to 2-9).

Irrespective of Cork’s excellence Tipperary were still well in this contest and were left cursing their misfortune in the 46th minute when Martina O’Brien deflected Mairéad Morrissey’s punched effort over the bar.

Orla Finn and Aisling McCarthy then traded frees before efforts from Eimear Scally and Ciara O’Sullivan brought the scoring to a conclusion from a Cork point of view in the 52nd minute (1-7 to 2-12).

In a rousing finalé to this contest, however, Tipperary refused to give in and poured forward in search of scores. Mairéad Morrissey fired over a point before Orla O’Dwyer added another to leave six between them (1-9 to 2-12) with five minutes to play.

Martin O’Brien saved brilliantly from Aishling Moloney in the 56th minute before Tipp ‘keeper Lauren Fitzpatrick conjured a terrific stop of her own a minute later to deny the raiding Orla Farmer at the opposite end of the field.

Róisín Howard scored Tipperary’s tenth point right on the hour mark, but there was still time for the Premier County to create yet another goal-scoring opportunity in second half injury time - Howard and Aishling Moloney combined beautifully before Cork ‘keeper Martina O’Brien saved superbly, this time from Gillian O’Brien.

The Tipperary panel of players pictured before taking on Cork in Ardfinnan on Saturday afternoon.