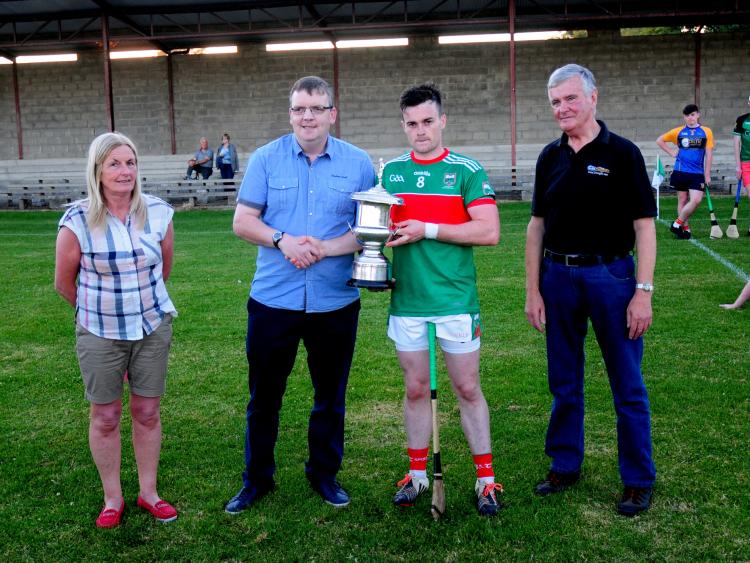 In the absence of regular custodian Shane Nolan, Evan Sweeney, a quality forward who has worn the county jersey, donned the number one shirt and having done his bit between the posts moved outfield when the game went into extra-time and fired over four points on the trot in the second half - Sweeney's scores were decisive in bringing the trophy back to Loughmore-Castleiney after a long absence.

Despite the intense heat and rock-hard playing surface this was a most entertaining contest and while defeat was their disappointing lot Moycarkey-Borris, the outsiders, will draw a lot of positives from the performance as they shape up for their Séamus Ó Riain Cup campaign, not least the spirit shown as they slugged it out score-for-score with opposition, who justifiably entertain Dan Breen Cup aspirations, not to mention the Mid Tipperary Senior Hurling Championship title.

A goal by Tom Hayes for Moycarkey-Borris in the first minute set the tone as Moycarkey seized the initiative, but by the 14th minute, with both sides faulty in their finishing, the sides were level at 1-1 to 0-4. And, so it continued to half-time with Kieran Morris of Moycarkey and John McGrath of Loughmore trading points from frees, but at the break Moycarkey had a 1-8 to 0-8 advantage.

Moycarkey showed no sign of wilting on resuming and with Pa Carey grabbing his second point they were 1-10 to 0-9 to the good after forty-two minutes.

Then came a five-minute surge from Loughmore which yielded five unanswered points in as many minutes from John McGrath (two), Shane Hennessy (two) and Joey Nyland as they hit the front for the first time (0-14 to 1-10).

A Kieran Morris point for Moycarkey temporarily halted the run, but after a break for water Loughmore came again with John McGrath pointing, Eoghan Ryan netting and Anthony Ryan pointing to put them five points clear and on course for victory with five minutes to go.

But Moycarkey were not done and produced a marvellous late rally which yielded five points through Kieran Morris (three), Eoghan Hayes and Brian Moran (an injury time effort) to force a draw and send the game to extra time with the sides tied at 1-16 each. Once more Loughmore took up the running, but Moycarkey were battling all the way. John McGrath netted for Loughmore after six minutes and Moycarkey goalie Rhys Shelley made a fine save from him approaching the break at which stage Loughmore were ahead 2-18 to 1-20.

Cue Evan Sweeney’s switch outfield and after Tom King extended Loughmore’s lead Sweeney picked off a brace of sweet points. Kieran Morris replied before Sweeney had another double, punctuated by a Pa Carey point for Moycarkey leaving Loughmore four ahead with time running out. Time was now Moycarkey’s problem, but they kept at it and in a lively finish shared four points with their rivals who finished 2-25 to 1-24 victors.

The status of the Cahill Cup may have diminished somewhat with the introduction of a plethora of leagues and round-robin structures in the championship, but it is still a prize of considerable significance. In addition both these sides will benefit from a seriously competitive outing as they revamp their championship preparations.

Despite some absentees Loughmore had enough strength in depth to get them over the line, but Moycarkey, also without a few regulars, could have taken the honours with better finishing.

Evan Sweeney’s four points may have been the stand-out contribution in Loughmore’s win, but as ever the McGraths - John, Noel and Tomas - Tom King and Joe Hennessy were also to the fore.