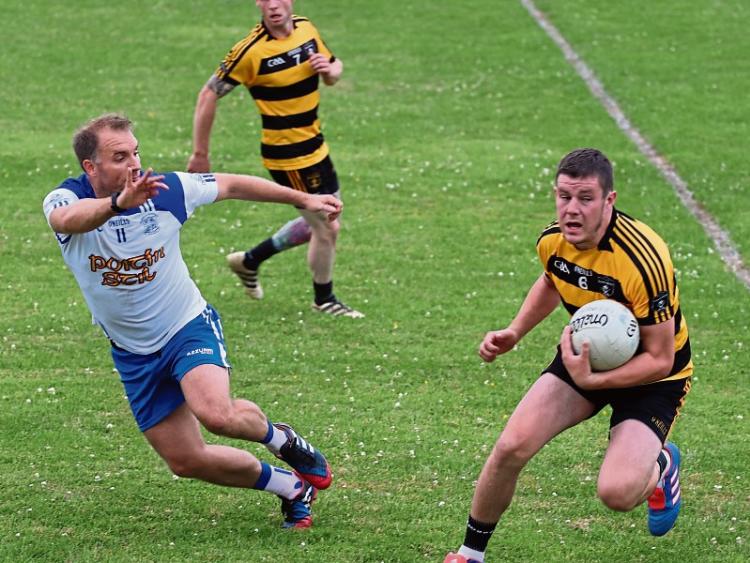 Darren Lowry (Arravale Rovers) about to be challenged by Ross Dunne (Cappawhite) when the sides met in the AIB Tipperary West Junior ‘A’ Football Championship at Solohead on Friday evening last.

Arravale Rovers comfortably saw off the challenge of Cappawhite in this AIB Tipperary West Junior A Football championship encounter on Friday evening in Solohead.

Arravale Rovers were quickest out of the blocks and lead 1-3 to 0-1 after eleven minutes of play through points from Stephen Quinn, Brian Jones and Andy Lacey with Quinn raising their first green flag.

The pick of the Cappawhite scores were well taken points by William Barry and Jerry O’Neill. Willie Barry (Cappawhite) fires off an effort at a point as Richie Lohan (Arravale Rovers) attempts to block during the AIB Tipperary West Junior ‘A’ Football Championship game played at Solohead.

Arravale Rovers always looked more comfortable in possession and had the ability to really drive on. James Hogan (free) and Brian Jones tagged on points before Michael Ryan was set free to grab home their second goal. Pakie Bourke then grabbed a third goal just before the break as Arravale lead 3-7 to 0-6 before the interval.

Arravale Rovers continued their good form as the second half resumed and added further points from James Hogan (play and sideline) before Stephen Quinn struck for his second and Arravale Rovers fourth goal. Jerry O’Neill got Cappawhite off the mark in the second half with a pointed free but they struggled to add to this.