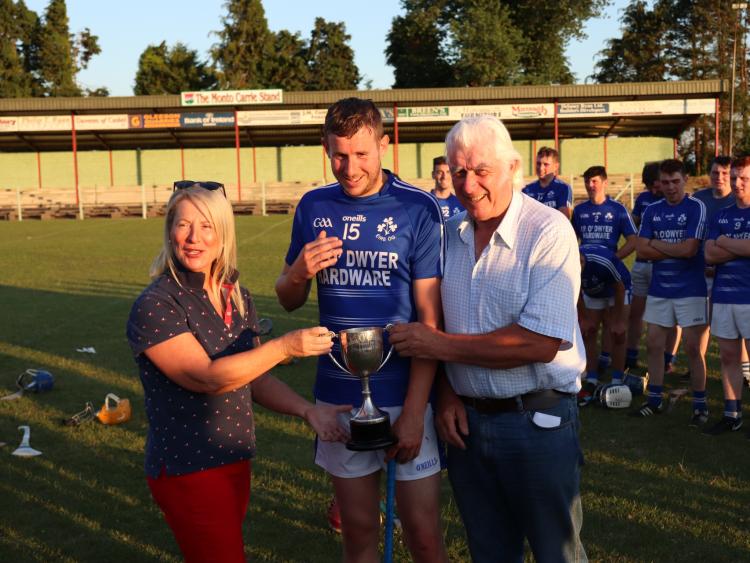 Éire Óg Annacarty-Donohill claimed a first-ever Maria Marron Palmers Hill Stud West Tipperary Junior B Hurling League title when they overcame the challenge of Cappawhite on Tuesday, July 10th in Cashel - John Quinn’s second half goal put daylight between the sides and while Dean O’Dwyer goaled for Cappawhite at the very end Éire Óg had done enough to secure victory.

Cappawhite opened up an early advantage and led 0-3 to 0-1 after three minutes. James Bradshaw opened their account and this was followed by a Fionn Brady pointed free. Conor Bradshaw replied with a pointed free for Cappawhite, but Davy Orr restored their two point advantage. Éire Óg soon found the target and added points from Paul Downy and Conor Bradshaw. Both teams were evenly matched at this stage and Colm O’Dwyer levelled the game. Conor Bradshaw pointed and Eoghan Ryan responded to tie up the game at 0-5 apiece.

Éire Óg dominated the second quarter. John Quinn, Conor Bradshaw and Paul Downey all pointed in a three-minute spell and their lead was out to four points when Willie O’Neill opened his account. Fionn Brady pointed from a free just before the half-time whistle and Éire Óg led 0-9 to 0-6 at the break.

Cappawhite started the second half more lively with Paddy Julian taking the challenge to Éire Óg. Davy Orr cut the gap to two, but they failed to take advantage of further opportunities as they seem to go for goal when points would have done. Conor Bradshaw opened Éire Óg’s account for the second half with a pointed free.

In the 13th minute a good Éire Óg move saw John Quinn fire the sliotar to the net to open up a six-point advantage. Éire Óg seemed far more comfortable at this stage as Cappawhite struggled to get a foothold on the game. Fionn Brady added another point for them, but points from Conor Bradshaw and Paul Downey further extended Éire Óg’s advantage. Cappawhite did rally and Dean O’Dwyer added two points from frees while Donagh Heffernan pointed from play. Deep in injury time Dean O’Dwyer goaled from a free, but it was the last attack of the game.