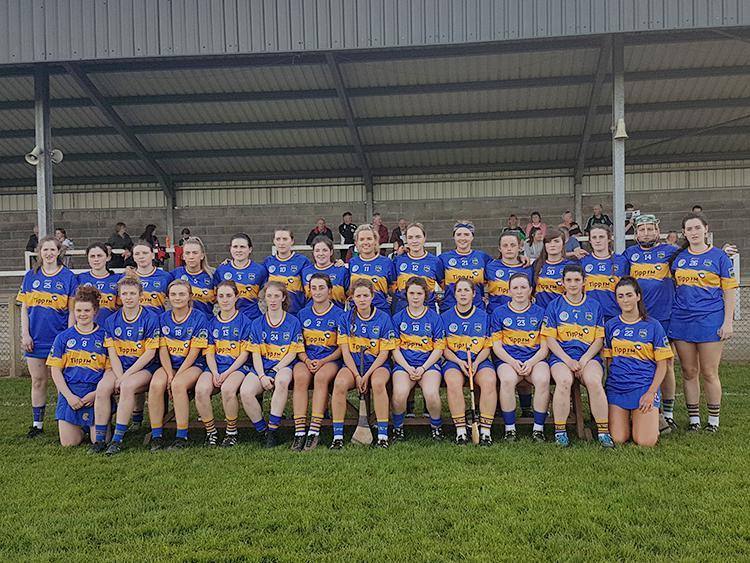 An absolute bullet of a shot from Grace O’Brien saved Tipperary at The Ragg on Saturday evening in the latest round of the Liberty Insurance All-Ireland Senior Camogie Championship. Offaly set the pace and pieced together the better hurling for the majority of this contest. And, the Faithful County led by two points deep into injury time when O’Brien struck for an opportunist goal in the 65th minute.

Both sides had already beaten Wexford and since Cork were dominating the group the battle for second and third place appears to be between Tipperary, Offaly and Dublin. The group winners progress to the semi-finals of this year's championship while the runners-up and third-placed teams compete in the quarter-finals.

So, this win over Offaly sets the Premier County on a steady course to reach the quarter-finals. Incidentally, next up for Tipperary is a clash with Dublin on the week-ending Sunday, July 22nd.

Both sides went at it from the off at The Ragg and to be fair Offaly set the terms and conditions of this contest for long stages. Indeed, thanks to two first half goals the side coached by Richie Power (Kilkenny) led 2-3 to 0-8 at the break and extended that advantage to five points (2-10 to 0-11) by the 51st minute.

Tipperary, to their credit, refused to panic and reeled their opponents in before Grace O’Brien struck for the winning goal after Cáit Devane’s late, late free was batted out into the path of the Nenagh Éire Óg star.

It is also worth noting that the Offaly supporters were not at all pleased at the final whistle - referee Andrew Larkin had indicated that he was prepared to play four minutes of injury time, but the Tipperary winner materialized in the 65th minute.

Offaly burst into devastating life and led 1-2 to no-score - the three-pointer materialized in the 11th minute when Siobhán Flannery lashed a terrific shot into the top left hand corner of Caoimhe Bourke’s goal.

Tipperary steadied when Cáit Devane converted three successive frees and then a ‘50 to leave one it by the 20th minute (0-4 to 1-2).

The Premier County had also enjoyed slight sniffs of goal during the opening quarter: Grace O’Brien found the side netting in the eighth minute, Róisín Cahill saw her effort saved in the 19th and seconds later Cáit Devane’s 21-yard free was also stopped by an alert Mairéad Jennings.

The home side’s first score from play materialized in the 22nd minute when Tipperary pieced together their most eye-catching move of the evening - Karen Kennedy won the ball and picked out Grace O’Brien who set up Cáit Devane for a terrific right-handed point to tie the game.

Three minutes later, however, a Sarah Harding effort dropped into the net to cut Tipperary three adrift. Caoimhe Maher and Grace O’Brien responded with points before efforts from Arlene Watkins and Róisín Cahill brought the opening half to a close. Indeed, Cahill was required to battle gamely for her score, a quality Tipperary would require in spades post-interval (0-8 to 2-3).

Offaly absolutely dominated the opening twenty-one minutes of the second half when out-scoring Tipperary 0-7 to 0-3. The home side found it difficult to track the enterprising runs of the Offaly midfield partnership. Indeed, Orlaigh Kirwan and Arlene Watkins made a whole series of off-the-shoulder supporting runs and were rewarded with five points from play between them.

Orla O’Dwyer (who had played a full match with the Tipperary ladies football team just hours earlier) tied the game in the first minute of the second half, but then Offaly took over with some terrific scores helping the visitors toward a commanding 2-10 to 0-11 lead by the 51st minute. All Tipperary could muster during this period were a brace of Cáit Devane frees in response.

Tipperary, however, looked calm and composed irrespective of the circumstances and stuck to their task. A Grace O’Brien strike in the 54th minute reeled Offaly in a little before a Cáit Devane free on the hour mark left three between them.

Three minutes into injury time Cáit Devane went for goal from a free, but the Clonoulty-Rossmore star’s ambitious effort was deflected over. There was still time, however, for Tipperary to launch one final assault on the Offaly goal. This time Cáit Devane drilled in a free; the ball was batted back out and into the path of the waiting Grace O’Brien who did the needful.