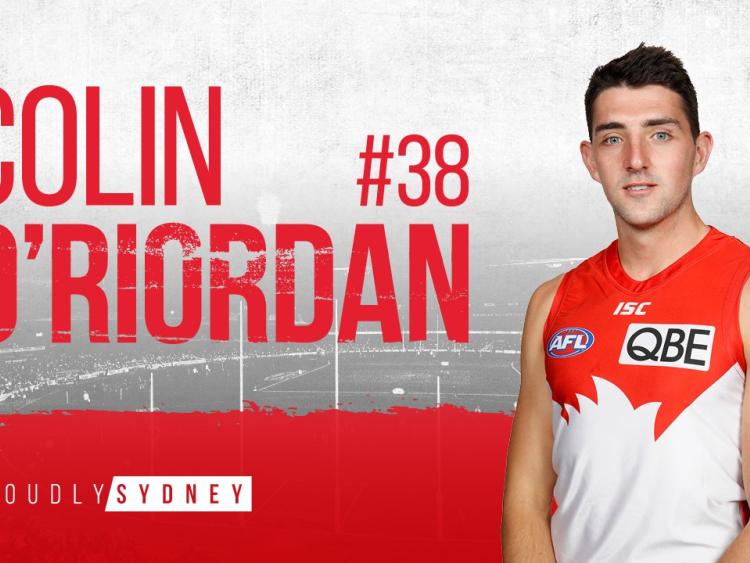 Templemore's Colin O'Riordan made his AFL debut for the Sydney Swans on Sunday.

Templemore’s Colin O’Riordan made his Australian Football League debut for the Sydney Swans on Sunday - the talented 22-year-old featured in the Swans’ 104-98 victory over the North Melbourne Kangaroos at the Etihad Stadium.

A last-gasp goal sealed the win for the Swans while Colin Riordan registered a highly-impressive seventeen disposals, six marks and five tackles while Colin’s parents, Michael and Imelda, travelled from Tipperary to attend their son’s first AFL game.

Colin O'Riordan responded to the experience of the game and the support that he has received this week when he posted the following to Twitter on Sunday.

A week I’ll never forget. Absolutely humbled by the support of everyone both here and at home. ☘️⚪️ https://t.co/nJNoY6CO31

Speaking at the announcement of the game day squad during the week Swans coach John Longmire said: “It is great to have Colin into the team. He has been fantastic since he got to our club; he has great energy and is just a really great person. He has been doing everything we have asked for in our reserves so he gets his opportunity which is terrific”.

Colin O’Riordan has earned the plaudits this season following a series of outstanding performances in the NEAFL (reserves league) and the former Tipperary inter-county football star has credited Kerry man Tadhg Kennelly for his influence on the 22-year-old - Tadhg Kennelly is currently the Swans’ development coach and has been working alongside O’Riordan in order to develop his game.

Speaking on the Sydney Swans website Colin O'Riordan said: “To start the journey three years ago and now to be able to run out for my debut is something I’ve wanted to do ever since I came here. That’s what I’ve come to Australia to do and I’m just absolutely stoked. I have a huge sense of pride and it just feels like all the hard work has paid off. I didn’t really know what to expect walking into the team meeting on Tuesday morning. It was all a bit surreal and I wasn’t expecting to be told I’d be making my debut one little bit. Then when you walk in and the coaches are there and all the players are there it’s a really special moment. I reflected on my journey a bit when I was told and to come from where I came from and to get the chance to make my debut is surreal”.

You can read the full interview with Colin O'Riordan on the Swans' website by clicking here.

Colin O'Riordan made the transition to the AFL three years ago following an outstanding underage hurling and Gaelic football career with Tipperary.