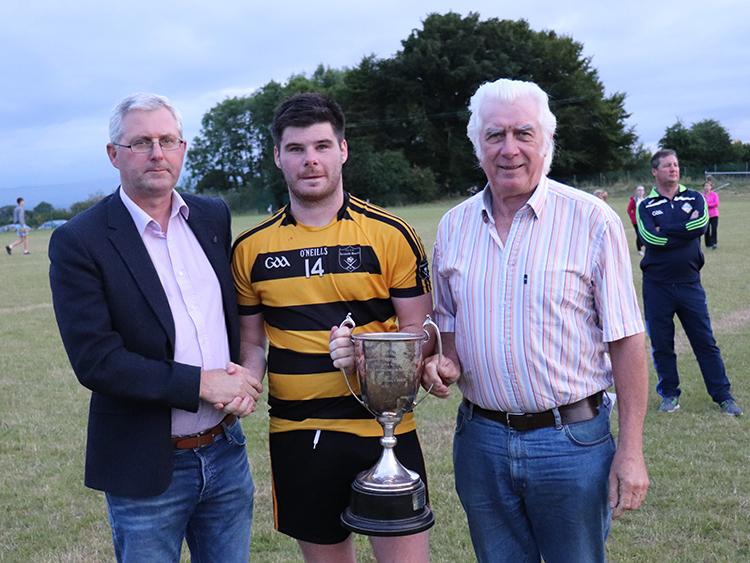 Bryan Lowry opening the scoring with a pointed free in the first minute, but despite this effort the next score of the game would not arrive for a further fourteen minutes. Arravale were creating chances, but kicked a series of wides mainly due to Golden-Kilfeacle having numbers back in defence and applying pressure on the kickers.

Golden-Kilfeacle gradually worked their way into the game and they used possession wisely when working the ball through the hands and running at the Arravale defence.

Seán O’Halloran opened the Golden-Kilfeacle account on the quarter mark with a pointed free. Two minutes later Shane O’Connell powered through the Arravale defence before unleashing a bullet of a shot which gave Timmy Dalton no chance in the goal.

Arravale Rovers responded well and three points in two minutes from Donagh Leahy (two) and Bryan Lowry had the teams all square. Lowry and Leahy added a further point each to send Arravale into a two-point lead as half-time approached.

Golden-Kilfeacle now tried to retain possession and eventually earned a free which Seánie O’Halloran converted to leave just a point between the sides at the break (0-6 to 1-2).

Again scores were slow to come by in the second half. Seven minutes in Bryan Lowry pointed from a free which was then cancelled out by Seánie O’Halloran at the other end.

Lowry found the target from play, but again Golden-Kilfeacle worked another free which was pointed by Seán O’Halloran.

Points from Bryan Lowry (free) and Matthew Moroney had Arravale Rovers three up with ten to play. Seánie O’Halloran did cut the gap to two, but Arravale finished stronger. Points from Donagh Leahy, Darren Lowry and Pakie Bourke sealed the game for Arravale. Sean O’Halloran finished with a sixth point from a free at the very end.

Arravale Rovers were best served by Pearse Richardson, Oscar O’Dwyer and Darren Lowry in defence while Donagh Leahy and Bryan Lowry were always a threat in attack.

Golden-Kilfeacle were best served by Daithí Bargarry, Niall Heffernan, Shane O’Connell, James McCarthy and Andy Byrnes who did a lot of running and tracking back while Seánie O’Halloran was very accurate from placed balls.