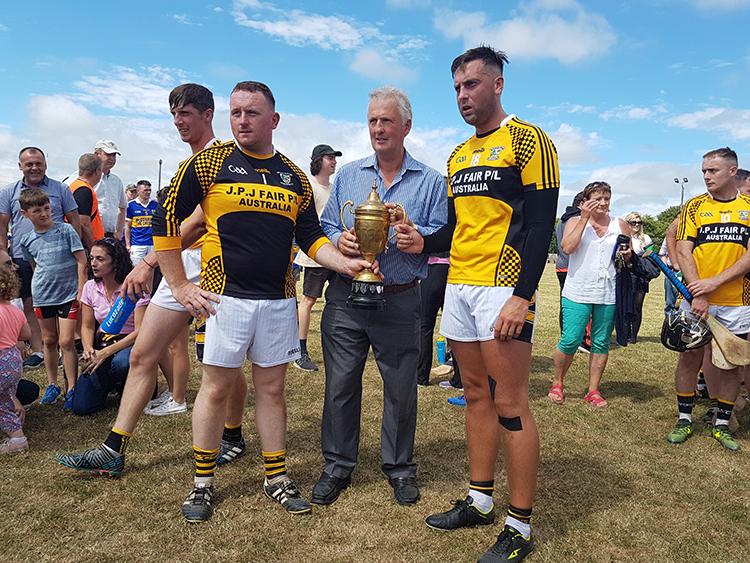 A lightning fast start from the Knockavilla-Donaskeigh Kickhams saw Fergal Horgan’s men fire home three goals during the opening eight minutes of this contest and when a fourth was added soon after Seán Treacy’s found themselves cut adrift entirely in the Tipperary Water County Hurling League division three final which was played at a baking hot Drombane on Sunday afternoon.

Seán Treacy’s certainly tried their utmost to respond to the challenge posed, but on this occasion Knockavilla-Donaskeigh Kickhams hurled too fast, moved too fast and thought too fast for their West Tipperary rivals.

And, whatever hopes Seán Treacy’s may have harboured in terms of mounting a second half comeback those hopes evaporated completely in the third minute of first half injury time when Oliver Carr was sent off - Carr appeared to have nailed a Kickhams ball carrier with a solid shoulder, but referee Peter Carroll indicated that the challenge was high and dismissed Carr for a second bookable offence.

The sides traded points initially before Brendan Ryan raced onto successive breaks in behind the Seán Treacy’s full-back line and buried goals in the fourth and fifth minutes. Then, as early as the eighth minute, Knockavilla-Donaskeigh Kickhams conjured a third three-pointer when Pakie Farrell and Michael Shanahan combined smartly before Ger Browne delivered a composed finish. Michael Shanahan added a point from play soon after and Knockavilla-Donaskeigh Kickhams led (3-2 to 0-1).

Seán Treacy’s managed to out-score Kickhams 1-2 to 0-1 during an encouraging five-minute spell with the goal arriving courtesy of Paudie Carey in the 15th minute - the powerful full-forward pounced on a break following Darragh Kennedy’s sideline ball and made no mistake from close range (3-3 to 1-3).

Efforts from Nathan Ryan and Ger Browne then book-ended a Paddy Carey ’65 to leave eleven between them with twenty-seven minutes played (4-6 to 1-4).

Seán Treacy’s closed out the opening half in positive fashion thanks to points from Darragh Kennedy, Aaron Ryan and Paddy Carey (free), but were left dismayed in the 33rd minute when reduced to fourteen men.

Knockavilla-Donaskeigh Kickhams appeared to have worked carefully on their patterns of play and they used their extra man to significant effect in the second half. Indeed, Paudie O’Carroll found himself on the end of a slick short puck-out routine in the 39th minute and duly notched the point of the game.

Seán Treacy’s hit back with two converted placed balls, but Knockavilla were hurling much better and fired over four consecutive scores to lead 4-14 to 1-10 with seven minutes of normal time to play.

In an eye-catching display Seán Ryan tried to drive Seán Treacy’s forward from centre-back - Ryan landed a point, set up Paddy Carey for another and then provided an assist for a Darragh Kennedy goal in the 56th minute which gave the scoreboard a much more presentable look to it.

There was still time, however, for Knockavilla-Donaskeigh Kickhams to add three more points while Aaron Ryan enjoyed the final say in the matter.