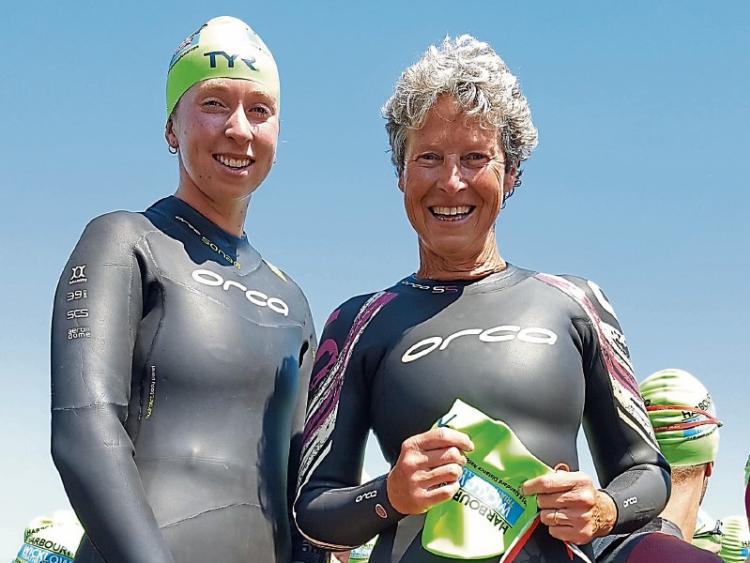 Nell McCarthy with her daughter Aoife after competing in the Wicklow triathlon.

Clonmel’s Nell McCarthy is now  ranked as Ireland’s No 1 triathlon woman in her age group.

A formidable swimmer and cyclist, Nell  in recent years has made considerable progress in developing  as a runner and has climbed the triathlon ladder, becoming Ireland's No 1 triathlon woman in the 60-64 category.

Nell, known for her active role in  Clonmel swimming and in Powerstown/Lisronagh Comhaltas, started out on the triathlon journey in 1988.

She entered her first triathlon in 1989  where the cyclist and an Irish record holder in the pool did very well but her running performance let her down.

The demands of bringing up a family intervened before Nell  took up the sport again  in 2006 when she entered a competition at Bishop’s Castle ,  on the border of Wales and England with her husband Paul.

The event rekindled her interest in triathlons and when her daughter  Aoife expressed an interest  in competing in the Kilkenny triathlon,  Nell joined her.

Again running  was the problem for Nell and following  a visit to her daughter Nina in Australia where she discovered the Park Run concept, Nell returned back to Clonmel  joining the  Park Run  on Saturday mornings in  Powerstown Park.

Gradually Nell’s running performances improved  and  she is now a proud holder of the No 1 ranking for women in the country  in the triathlon in her age group.