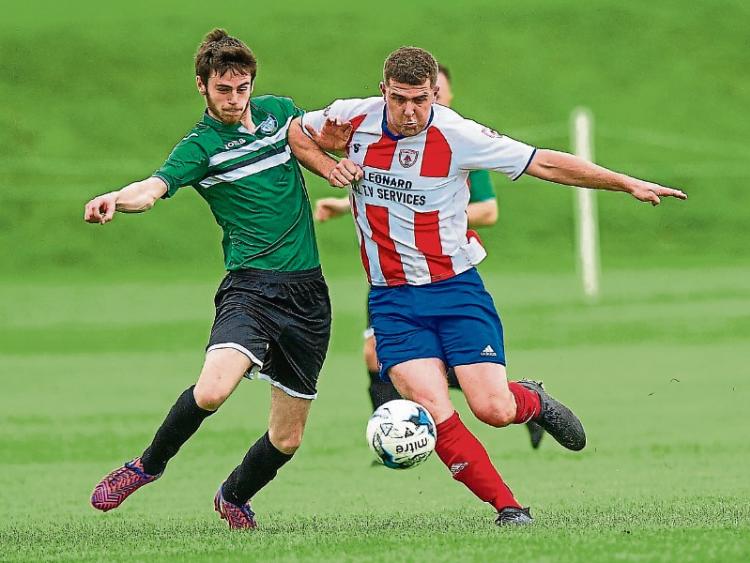 Bansha Celtic's Niall Daly (right) who played a big part in his side's away victory to Thurles Town in the semi-final of the John Delaney Cup on Sunday.

Bansha Celtic progressed to their first-ever John Delaney Cup final after a tough game against North Tipperary’s Thurles Town, to set up an all TSDL final against local rivals St Michael’s on Thursday night.

The home side began better and hit the crossbar with just four minutes gone. Three minutes later they found themselves in front thanks to a well-taken effort that beat Celtic keeper Robbie Jordan all ends up.

However it took Bansha Celtic just 90 seconds to equalise when a quick break found Niall Daly in the box and after some good work from the home defence the ball broke to Bernard Fitzgerald who blasted home from eight yards out.

The rest of the first half saw both teams struggle to create many chances, without ever threatening either keeper and the teams went to the break level at one all.

The second half was again a tough dogged affair, but slowly the TSDL side started to get on top and create a few chances. The goal that put them in front came 15 minutes from the end scored by Stephen O’Dwyer, who slammed home a fine goal from twelve yards out after a great run into the box.

Thurles tried to get back into the match, but were finding the Celtic defence solid and the game was sealed eight minutes from the end when a great pass from midfield found Niall Daly who lobbed the out rushing keeper from outside the area.

St. Michael's always had the upper hand here without unduly extending themselves, even though their opponents have had a head start on them with their season having begun a number of weeks ago.

The home side started well and had some efforts go close, notably from new boy David Joyce and Colin Bargary.

On 20 minutes Paul Breen knocked down a Shane Ryan free but Olly O’Driscoll's header went straight at Luke Patterson, as the TSDL side tried hard to open the scoring.

St. Michael’s finally took the lead ten minutes before the break when Shane Ryan scored with a half volley from a Chris Higgins cross following good initial work from Joyce.

They then brought in returning players Pa Quinn and Willie Armshaw at half time for Olly O’Driscoll and Rodrigo Goncalves and Armshaw in particular with his pace had a big impact on the game.

Harps Johnny Coleman shot wide across Derek Breen’s goal early in the half as the Templemore side tried to get back on terms but as the half wore on it was the Tipperary town side who were again in the ascendant.

A Sean Guerins effort slammed back off the crossbar in the 65th minute and ten minutes later the Saint’s wrapped it up when David Joyce picked up a ball from David Slattery, setting off Armshaw whose neat finish found the corner of the net.

Substitute Evan Hanrahan was taken down in the area two minutes from time, but David Slattery's penalty hit the post and went wide. The miss made no difference to the eventual result however and Michael’s now have another Delaney Cup final to look forward to next week.