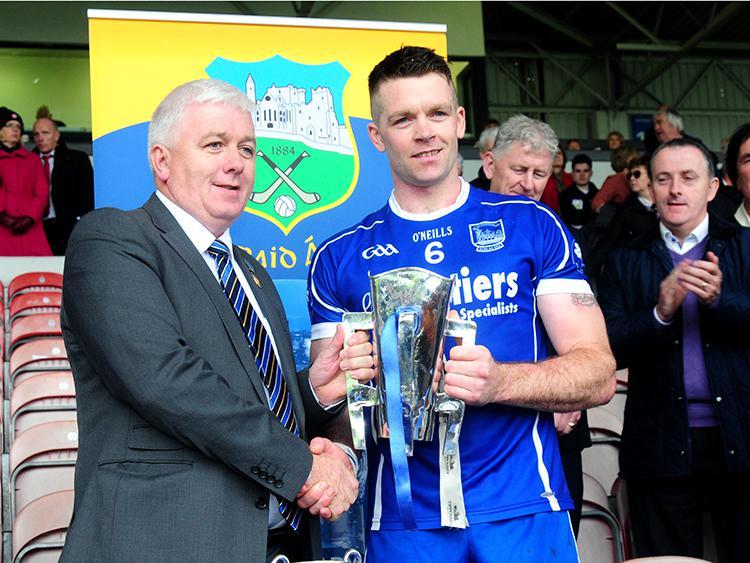 At last - the Tipperary Water County Senior Hurling Championship swings back into action this weekend. And, we will be treated to some tantalizing clashes as the battle for places in the knock-out stage heats up. Indeed, the group three meeting of Upperchurch-Drombane and Thurles Sarsfields could well represent the pick of the games - the Mid Tipperary rivals meet in group three on Saturday, August 11th at The Ragg (2pm).

Upperchurch-Drombane got off to a terrific start when beating Drom & Inch (0-20 to 1-13) in April while Thurles Sarsfields were presented with a walkover by Carrick Swans - the South Tipperary men face a rejuvenated Drom & Inch at Leahy Park, Cashel on Saturday (7pm).

Drom & Inch simply must win that contest and all the indications are that they will.

Although Sarsfields still have a Mid Tipperary Senior Hurling Championship final to look forward to you can be sure and certain that Thurles will want to do the business here and secure their place in the quarter-finals as fast as is practically possible.

You can expect Drom and Sarsfields to prevail.

Clonoulty-Rossmore registered a solid win over Mullinahone (1-14 to 0-11) in the opening round while Nenagh Éire Óg proved far too strong for Roscrea (2-24 to 0-11). Those contests, however, took place in April and this weekend's clashes could make for interesting viewing.

Roscrea face Mullinahone on Saturday, August 11th in Templetuohy (5pm). It will be widely assumed that Mullinahone will be too strong for the North Tipperary men, but the Roscrea side is stuffed full of raw talent and real pace. So, watch out for a potential upset here.

Meanwhile Clonoulty-Rossmore and Nenagh Éire Óg will meet on Sunday, August 12th at The Ragg (3.30pm). Clonoulty-Rossmore beat the Blues impressively in a recent league game which will give John Devane's side plenty of confidence facing into this contest.

Please note that Clonoulty-Rossmore have already secured their place in the knock-out stage of the championship thanks to winning the West Tipperary title earlier this season.

Although Éire Óg Annacarty lost the West final to Clonoulty-Rossmore the Killenaule men claimed the South meaning that Declan Ryan's men have, at the very least, a preliminary quarter-final to look forward to.

On Saturday, August 11th Killenaule take on Kilruane in Templetuohy (6.30pm) while on Sunday next, August 12th Toomevara face Éire Óg Annacarty at The Ragg (2pm).

Kilruane await the winner of the replay between Kiladangan and Nenagh Éire Óg in the North final, but you can be sure that Liam O'Shea will have his troops breathing fire for the clash with Killenaule.

The MacDonagh's are fancied to prevail here while Annacarty may prove too seasoned for Toomevara in their contest.

One of the real potential crowd-pulling games takes place on Saturday, August 11th when Borris-Ileigh and Loughmore-Castleiney collide at The Ragg (3.30pm).

Loughmore are through to the Mid final against Thurles Sarsfields, but nothing is guaranteed for them going down the divisional route so beating Borris-Ileigh this Saturday has to be Declan Laffan's top priority.

And, given the quality of their display in the Mid semi-final against Holycross-Ballycahill (1-30 to 0-10) Loughmore-Castleiney would have to be favoured against a Borris-Ileigh team who will potentially be without Brendan Maher, Dan McCormack and Niall Kenny.

On Saturday, August 11th in Nenagh (7pm) Kiladangan will be expected to get the better of Portroe. Indeed, Portroe may well struggle to stick the pace here and require heroics to avoid relegation.