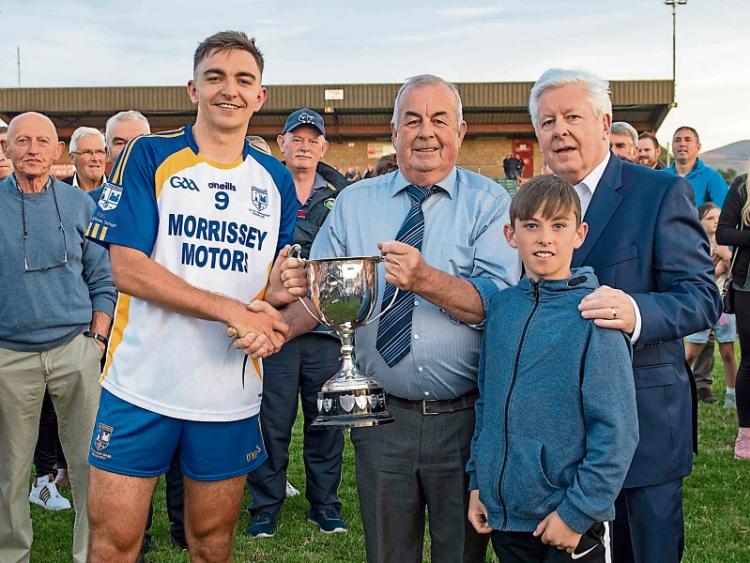 There was a great outpouring of excitement, joy and relief at Ardfinnan on Friday evening last as Fr. Sheehy’s ended a famine stretching all the way back to 2001 without any adult title, in any code, at any grade.

Understandably so at the end of such a barren spell the men from Clogheen and Burncourt were entitled to treasure the occasion, and while lifting the cup itself was all that seemed to matter in the moment, they can also take great encouragement from a performance that simply blew last year’s champions off the park.

From the throw-in right until referee Martin Doyle’s final whistle there was no let up in a performance packed with determination, intensity and passion. Having waited so long for a title, and having lost two South intermediate football finals in the past two years, to Fethard and Clonmel Og respectively, this time, at last, there was to be no denying Fr Sheehy’s.

Never led at any stage in the game, Fr Sheehy’s dispelled early nerves, including a good goal opportunity wasted by Clonmel Og’s Chris O’Gorman, to go into a 0-4 to 0-0 lead after the first quarter.

The attendance had to wait until the fifth minute for the opening score of the game, a free converted by team captain, the hugely impressive Sean Flynn, and won by the electric pace of Colin English, for whom ‘The Og’ had no answer all evening.

A Liam O’Connor point in the eighth minute doubled that lead, the veteran Fr Sheehy’s player getting a final touch as the ball bobbled dangerously around the Clonmel Og goalmouth.

Ben Hyland, with a superb free off the floor from way out left, stretched the lead to three after 15 minutes and from the kick-out Hyland was to do further damage.

The midfield battle for the kick-out was won by Brian Hyland and in a move linking up with Cian O’Brien the final pass was delivered to Ben Hyland who hit a thunderous goal from 15 metres which Jocky Landers got a touch to but couldn’t stop.

Soon after that team captain Sean Flynn combined once again with Ben Hyland who kicked a sweet point on a swivel to stretch the lead to 1-4 to 0-0 after 17 minutes as Clonmel Og looked on like a rabbit in headlights.

The defending champions eventually got on the scoreboard in the 18th minute when Conor Arrigan finished a move involving Graham Quinn and Shane O’Connor for his side’s first point.

It settled the Clonmel side a little, and after Darragh Kearney was impeded after a good run, Johnny Cagney got his third attempt at a place ball between the uprights to temporarily reduce the deficit to five points.

It was but a brief respite as in the space of three minutes Brian Dignam’s side hit three fine points from play without reply.

Colin English fed a ball back to Sean Flynn who from a standing position on the 45 metre line kicked a superb point in the 27th minute.

The pace of the Fr. Sheehy’s vanguard was their main method of attack and this was epitomised in the next passage of play with Flynn and English tearing through ‘The Og’ defence before Ben Hyland added another point in what was a very fruitful opening half for the centre-forward.

And with the momentum now behind them, right from the kick-out Colin English weaved around the flanks to kick a skilful point on the run for an eight points lead as half-time neared.

The final score of the opening half-hour went to Chris O’Gorman of Clonmel Og with a point from 35 metres to send the sides to the break at 1-7 to 0-3. At this stage one couldn’t see any way back for the Ned Hall Park boys against a fired up Fr. Sheehy’s.

But Clonmel Og did some repair work at the break and a few positional switches gave them a better footing on the resumption.

Minor player Cian O’Sullivan won a free in the second minute, and repeated the dose a few minutes later, his pace on both occasions, causing the Clogheen defenders a problem. Johnny Cagney pointed both.

When Conor Arrigan kicked a sweet point in the 35th minute the lead was back to four and one wondered would we have a game on after all.

A fine solo up the right wing by Tipperary under 21 hurling captain, Colin English, won yet another free and Sean Flynn duly obliged..

And then eight minutes after the restart, Clonmel Og threw down the gauntlet with a cracking goal. A punt from defence by Karl Kearney was taken well in the air by Conor Arrigan and after working his way free the pacey forward put Graham Quinn clear to blast home. Suddenly what was an eight points advantage before the break was now down to just two (1-8 to 1-6).

We would see now what Fr Sheehy’s were really made of.

However, as the game had come to life in a brief few minutes since the restart, it was to die a slow death from a competitive aspect thereafter. The final 22 minutes were dominated by a Fr. Sheehy’s side who quite simply were not for turning, not this time anyway. In the closing 20 minutes or so they would outscore their opponents by 1-7 to 0-1.

Another Flynn free after some good work from Thomas Conway – another who played a huge part in the historic win – settled the Clogheen side.

Sean Flynn then kicked a fine point from play from 35 metres to stretch the lead to four as the challengers upped the tempo of the game big time.

After Colin English was fouled yet again in the 48th minute, Flynn in his own inimitable free-kicking style bisected the uprights for a 1-11 to 1-6 advantage as Clonmel Og began to wane.

And then the game was put to bed with an absolute peach of a goal. A move down the right wing saw Liam O’Connor feed the flying Colin English. At pace the wing-forward blew open the double tackle of two Clonmel Og defenders to leave them in his wake. He soloed on another little before planting a rocket of a shot diagonally into the top corner of the net. It was well worth seeing - and for his overall contribution to the evening he deserved it. Maybe this could be a magnificent year yet for the young Fr. Sheehy’s man and club.

And the points kept coming the way of the men from Clogheen and Burncourt, with Flynn adding two more from play in the 53rd  and 55th minutes, where Robert O’Brien and Dylan Flynn were involved in their creation, and Flynn delivered their execution like a man enjoying himself immensely. The headlights had been turned on Clonmel Og once again to stand and stare it seemed with no answers to the wave after wave of attacks from Fr Sheehy’s.

Two minutes into time added-on Ben Hyland, running flat out through the heart of the Clonmel Og defence kicked the game’s final point. The intensity of the effort characterised the spirit of the winners. While home and hosed already there was to be no letting up this time. Indeed moments later Sean Flynn was at the end of a free-flowing move but his effort crashed back off the crossbar with the keeper beaten all ends up.

While Fr. Sheehy's seemed to have all the stars on the night, there was no doubting that this was a great team effort from No. 1 to No. 15 and beyond.

The defence led superbly by Thomas Conway at centre-back held last year's South champions to just 1-4 from play, each and everyone of them doing their job with commitment.

Sean Flynn led like a captain at midfield and ended with nine points, but Robert O'Brien his partner did a tremendous amount of hard work in winning and holding possession.

Colin English and Ben Hyland were architects in chief on the scoreboard with 2-5 between them but the whole department contributed in non-stop workrate over the hour.

It wasn't a good evening at the office for Clonmel Og who gave themselves too much to do with a very slow start and the effort early in the second half in clawing their way back into the final saw them run out of steam towards the end. The efforts of the likes of Kevin McGrath, Darragh Kearney, Alan Brannigan, Graham Quinn, Johnny Cagney, Cian O'Sullivan and Conor Arrigan were notable but overall they were behind in terms of effort and fight - and maybe fitness too - compared to Fr. Sheehy's who were on a mission it seemed.

A big improvement will be needed from 'The Og' if they are to figure in the county championship closing stages.