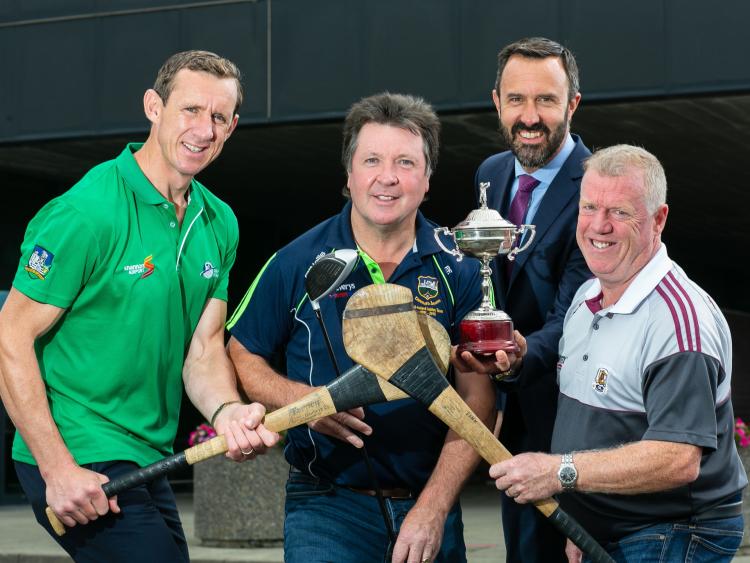 Past hurling stars of Galway, Limerick and Tipperary's Pat Fox made Shannon a hurling crossroads this week as they chose this week of weeks to launch the second annual Shannon Airport Cup Invitational.

Following the success of last year’s outing between Clare and Limerick in the Costa del Sol, this year the event organisers, Golf Voyager, have announced one-time Spanish Open course, Torrequebrada Golf Course, Benalmadena, will be the host for the competition.

Set for Saturday 17th to Tuesday 20th of November, the competition is this year being extended to take in other traditional counties of Offaly, Galway and Tipperary, all of whom - like Limerick and Clare - will have former hurling greats captain their sides on the trip.

On hand to launch the competition at Shannon Airport were Limerick captain for the golf challenge and 2007 All-Ireland finalist Ollie Moran. The launch event had plenty of pre-All-Ireland final spice, with two-time Galway medallist and goalkeeper Peter Murphy on hand to stimulate the build-up nicely. And just to ensure parity, also present was a man who himself participated in many classics against both counties, legendary Tipperary corner forward from the 1980s and ‘90s Pat Fox.

All three will be present in the Costa del Sol for the competition, captaining their sides and with Ahane native Ollie Moran defending the title he led Limerick to last year.

Stiff opposition will not just come from the counties represented at today’s launch but also the Banner county, who will be led in November by none other than two time All-Ireland winning captain Anthony Daly. The Offaly captain is due to be confirmed in the coming weeks but will be drawn from its golden era of the ‘80s and ‘90s.

With limited places for all five counties and a max capacity of just 120 golfers, those wishing to take part should contact Golf Voyager on 061 514600 before Friday 31st August 2018 for an event expected to sell out quickly.

Speaking at the launch of the golf challenge, Conor Galvin CEO of Golf Voyager stated: “There is an appetite for competitive team golf with a difference and bringing a hurling rivalry into the equation will certainly add to the excitement. This will be our fourth event of this type having twice hosted a similar Munster vs Leinster rugby themed golf outing in Vilamoura back in both January 2017 and January 2018 which was a huge success. We are also delighted that both Shannon Airport and Padraig McGrath from P&M Golf have decided to continue their sponsorship of the event”.

Welcoming this unique initiative Andrew Murphy, Managing Director, Shannon Airport said: “It’s a great week to be launching this event. Everyone is talking hurling, even the counties that aren’t involved in Sunday. It’s a game that’s captivating the imagination and generated a great amount of conversation here today, needless to say. It certainly whets the appetite for the golf challenge and we are delighted to continue our support for it. It’s fantastic fun, led by stars of the game and played on a top-class international course. Conor Galvin and his team at Golf Voyager have put together a great event and those who will fly out for it will certainly have a trip to remember.”

The format for the golf challenge is a team of two (Four-ball better ball), which combines with the overall team event. The top 5 cards per county per day go towards the team score while there will also be prizes for the top 10 teams, including golfing holidays. The price is €385pp based on twin room sharing and there are some additional spaces available for non-golfers at €180pp based on twin room sharing.

Flights are not included, but are available with Ryanair from Shannon to Malaga.