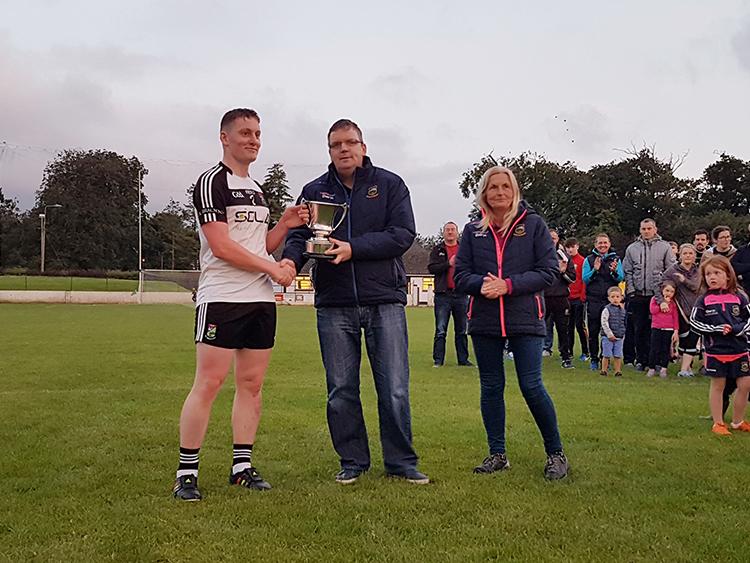 JK Bracken’s required extra-time to see off the challenge of Holycross-Ballycahill in the Jim & Anne Kennedy Mid Tipperary Junior A Football Championship final played at Templemore on Friday night. Holycross heroics in ordinary time forced the additional period, but, in truth, JK Bracken’s looked the more accomplished footballing outfit in this contest and they deservedly sealed the win thanks to goals which arrived courtesy of Stephen Quinlan and Dylan Moloney.

Holycross-Ballycahill trailed by four points in injury time of normal time when Jack Skehan punched home a goal and then converted a late free to rescue his side and force extra-time. JK Bracken’s, however, dominated extra-time with Dean McEnroe outstanding for his side throughout this contest. McEnroe was challenged for the man of the match award by Holycross-Ballycahill’s Stephen Flanagan, but Dean was terrific throughout and proved himself a real leader for JK Bracken’s. Indeed, if Dean McEnroe cannot make his club’s senior side then JK Bracken’s have a serious team this season.

Dylan Moloney presented JK Bracken’s with an early lead before Dean McEnroe (free) doubled their tally. Jack Skehan and McEnroe then traded placed balls before Stephen Flanagan’s first of three efforts from play left one it with thirteen minutes played (0-3 to 0-2).

JK Bracken’s were playing the more composed football and streaked into a four-point lead (0-6 to 0-2) by the 24th minute - Dean McEnroe was the key man during this period as Andrew Ormond, Michael O’Meara and Stephen Quinlan landed impressive efforts.

It is worth noting that both sides created eye-catching goal-scoring opportunities during the opening quarter - David Croke saved well from Nick Keane in the fifth minute while a flowing Holycross-Ballycahill move culminated with Kieran Hennessy finding the side netting in the 20th minute. Holycross ‘keeper David Croke also denied Andrew Ormond with a fine stop in the 29th minute while Stephen Flanagan and Dean McEnroe (’45) traded late efforts to leave four between them at the break (0-7 to 0-3).

Points from Dean McEnroe (free) and Andrew Ormond opened a six-point gap (0-9 to 0-3) by the 39th minute. Holycross-Ballycahill appeared doomed, that is until Stephen Flanagan roused his side when intercepting a JK Bracken’s kick-out in the 43rd minute and booting over a lovely score. Jack Skehan soon added a point from play and when Flanagan was fouled for a free in the 52nd minute Skehan converted (0-9 to 0-6).

Who else but Dean McEnroe checked Holycross-Ballycahill’s progress with a fine individual effort in the 58th minute, but Stephen Flanagan was still buzzing around the place and he floated in a delivery in the 61st minute which Jack Skehan punched into the net.

With JK Bracken’s wondering what had just hit them Holycross-Ballycahill booted two wides before a converted Jack Skehan free in the 66th minute forced extra-time (0-10 to 1-7).

Holycross-Ballycahill conceded five frees in the opening three minutes of extra-time and Dean McEnroe gladly kicked his side toward a significant 0-12 to 1-7 advantage.

Immediately after the break Jack Skehan responded with a converted Holycross-Ballycahill free. Dean McEnroe hit back with another placed ball and then the game-clinching score materialised four minutes after the interval.

JK Bracken’s pressed the Holycross-Ballycahill kick-out, won possession and in a flash Stephen Quinlan was through - Quinlan stroked home a smashing shot into the bottom left-hand corner. A minute later Quinlan set up Dylan Moloney for another three-pointer and JK Bracken’s led 2-13 to 1-8.

There was still time, however, for Andrew Ormond to land his third point from play and for Jack Skehan to convert a consolation free for Holycross-Ballycahill.