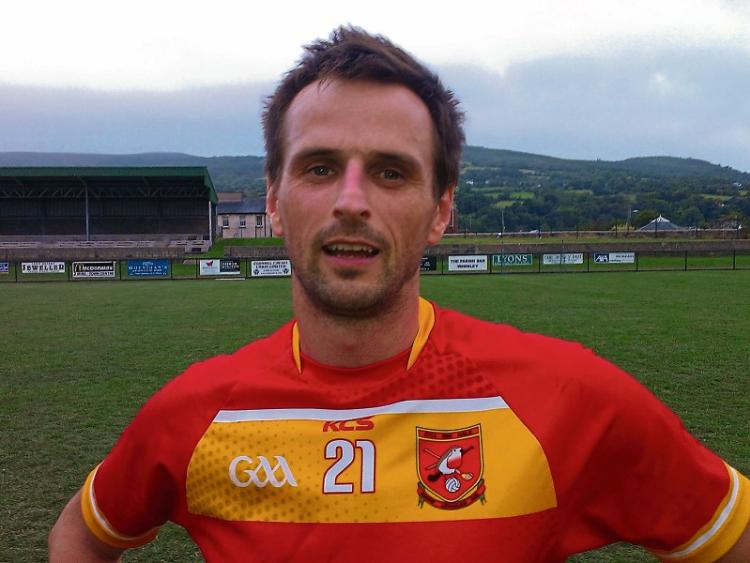 Eddie O'Brien had a penalty saved by Brian Enright in the first half but scored a cracking second half goal to send Killenaule on their way at Clonmel Sportsfield this evening against Cahir.

Last year’s county runners-up Killenaule booked their place in the 2018 county senior football championship quarter-finals with a comfortable enough victory over a young Cahir side at Clonmel Sportsfield on Saturday evening.

A second win from two starts sees ‘The Robins’ perched on top of Group 3 with their final fixture against Ballyporeen now largely academic with a place in the last eight already nailed down.

For Cahir, this was a second defeat having lost their opener to Ballyporeen in April. Their final game against last year’s county intermediate champions, Kildangan, now takes on a greater importance for the South Tipp side as they try to avoid a relegation dog-fight like last year. But they can take encouragement from an improved performance since their opening game.

Playing with the aid of the strong breeze Cahir were first on the scoreboard after four minutes with Mikey O’Connor pointing from 45 metres.

But the physical strength of Killenaule and their obvious ability to throw passing moves together at pace soon had them up and running with two quick points. A multi-phased passing movement culminated in Kieran Bergin getting them off the mark in the seventh minute and from the kick-out another interchanging hand-passing move was finished by Joe O’Dwyer for the lead.

Mikey O’Connor’s second point from 40 metres levelled matters again at 0-2 apiece in the 10th minute with John O’Connor’s side trying hard to take advantage of the first half breeze.

John ‘Bubbles’ O’Dwyer edged Killenaule one up a minute later with a lovely left legged point from 30 metres, and ‘The Robins’ doubled this advantage on the quarter hour mark when keeper Matthew O’Donnell kicked a 45 metre free into the breeze and high over the black spot.

A free off the ground by Alan O’Connor halved the margin as a young Cahir side took the challenge manfully to their more experienced opponents.

Two points in the space of a minute then pushed Cahir ahead. Alan O’Connor put in some trojan work trying to create an opening before eventually taking on the task himself and pointing the equaliser in the 19th minute.

And from the kick-out Mikey O’Connor forced an interception and carried on a run to land a delightful point with his left peg for a 0-5 to 0-4 lead for Cahir.

It lasted but a minute or two before another slow and patient build-up from Killenaule saw Gus Browne finish a point from close in for parity for the fourth time.

The kick-out from Cahir proved disastrous though going straight to Michael Doyle about 30 metres out. The veteran Killenaule player put the head down, held off a few challenges before blasting past Keelan Hickey.

It could have been even worse a minute later when Declan Ryan’s side strung yet another sequence of passes together only for Gus Browne to force his shot left with a goal very much on offer.

Cahir pulled a point back in the 26th minute with Robbie Costigan taking a super pass from Kieran O’Dwyer to fist over the bar.

Cahir then hit themselves with another unforced error. A save by Keelan Hickey in the goal wasn’t controlled properly and when Joe O’Dwyer pounced at the edge of the square Hickey was left with no choice but to haul him down. David Grogan awarded a penalty and sent Hickey off with a black card. However, sub keeper, Brian Enright, arguably the best keeper in Tipperary for many years, pulled off a superb save from Eddie O’Brien’s spot kick, sticking out a foot to save the well hit effort. It was a huge reprieve for Cahir and gladly they went to the break trailing by just two points at 1-5 to 0-6.

Cahir introduced star minor Dylan Fitzgerald at the interval and they had the better of the opening minutes into the breeze. Robbie Costigan was impeded three minutes in and Alan O’Connor pointed the free. And in the 40th minute, after the hard-working Darragh Howard was fouled, Alan O’Connor levelled matters for the fifth time at 1-5 to 0-8 as Cahir desperately tried to put it up to the fancied Killenaule.

Having already made a number of seemingly unforced mistakes, Cahir gifted Killenaule a second goal in the 42nd minute when a movement out of defence went astray and Eddie O’Brien took full advantage to solo in and drive one past Enright. After the penalty save before the break, it was O’Brien’s turn to savour the moment.

And this was the mortal wound it seemed for Cahir for thereafter Killenaule imposed themselves that bit more and extended a now three points cushion out to six over the next quarter of an hour. Joe O’Dwyer in the 46th minute kicked a nice point on the turn, and then two tasty points from team captain John O’Dwyer more or less killed off the contest.

Cahir kept trying with a free from another minor, Stephen Grogan, in the 55th minute and they pulled it back to four when Niall McKenna pointed two minutes from time.

The final say on the night went to Tony Doyle when the late substitute kicked a free from 40 metres to wrap up the final score at 2-9 to 0-10.

An interesting fact of the game was that Killenaule, despite having two players (Paudie Feehan and Cillian O’Dwyer) on the Tipperary Under 21 panel for next Sunday’s All-Ireland final they still decided to fulfil the fixture. It might turn out to be a wise decision which will in time ease their fixture congestion.

Killenaule packed just a bit too much punch in terms of experience and strength for a young Cahir who are learning fast.

The Killenaule full-back line were on top and never seriously challenged, and Jimmy Feehan anchored the defence well at centre-back. Kieran Bergin, Joe O’Dwyer and John O’Dwyer worked a world of ball through their hands all evening with the likes of Michael Doyle and Eddie O’Brien also prominent.

Cahir are still in a transition period, and without their county star Liam Casey in America, Brian McKenna and Dean Lonergan, they are finding it more difficult to cope. But there were signs here that they are beginning to get there as they are rebuilding with some promising players learning their trade at senior grade.

In defence Ger Halley, Conor Casey and Sean O’Connor stood up time and again. Mikey and Alan O’Connor put in a good hour shift too with some nice points kicked by both players. Niall McKenna, Darragh Howard, Ger Quinn and Dylan Fitzgerald all contributed also. But they were up against last year’s county runners-up and Killenaule will take stopping once again this year.