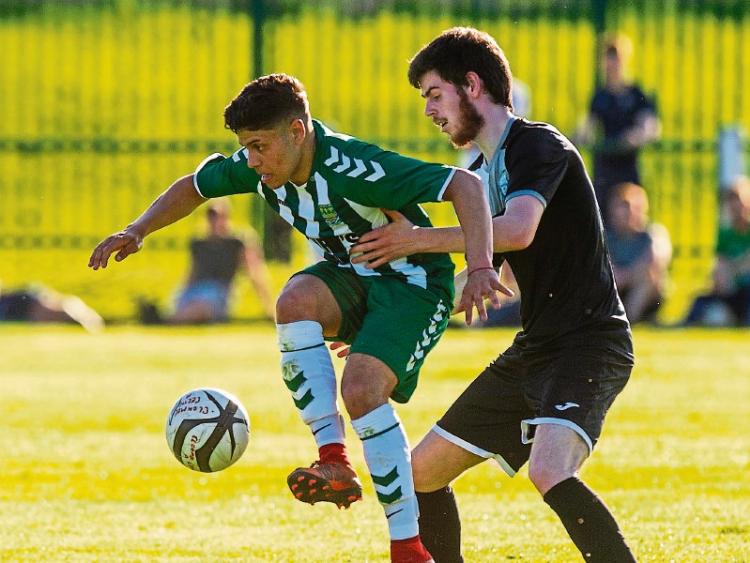 Rodrigo Goncalves (left) was one of the goalscorers for St. Michael's in their 7-0 win over Old Bridge at Green Lane on Friday night last in the first game of the new Premier League season.

There is probably never a good time to play St Michael’s in the TSDL calendar, but being the next game after they suffered a humbling defeat in last weekend’s John Delaney Cup would never have been the choice for Old Bridge if they had to pick their date.

That said, a fine crowd turned out last Friday evening to see the new season kick off and for the first half hour of the game, the home side gave as good as they got against a Saints team that were still a touch tentative after their recent loss to Bansha.

The visitors were creating the better chances but it took until the 25th minute for them to find their range when they eventually opened the scoring with a goal by Willie Armshaw who finished neatly on the half volley from a pass by Ollie O’Driscoll.

This opened the floodgates and minutes later provider turned scorer with David Slattery providing the assist on this occasion. And there was an almost inevitability to the third goal of the half when Armshaw put Slattery through five minutes before the break to make it 3-0 for the Tipperary town side.

The second period got no easier for the home side but they held out again until just after the hour mark when O’Driscoll got his second and his side’s fourth flicking home a brilliant Shane Ryan cross - Ryan himself was celebrating his recent call up to the Irish international amateur squad.

Pa Quinn got a fifth in the 66th minute,  and Rodrigo Goncalves rounded off the scoring with a late brace, with Ryan’s long range strike turning out to be the goal of the game.

All in all the Saints left Green Lane in seventh heaven and put down a marker that whatever may have happened in pre-season, they won’t be easily knocked from their perch  this year. For the Bridge it will be another tough year ahead.