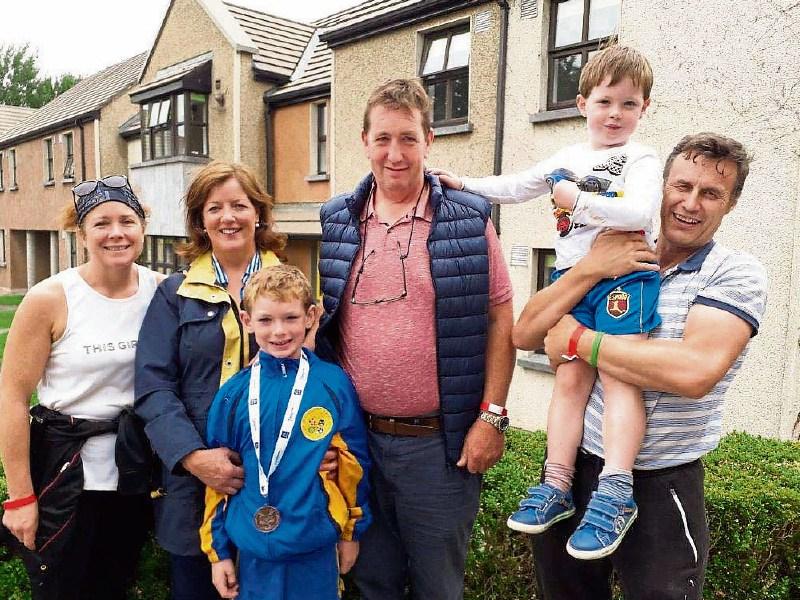 Sam Donovan, winner of a bronze medal in the under 8 80m sprint at the National Community Games finals at UL last weekend is pictured celebrating with his family.

Great success for the area at Aldi Community Games national finals Sam Donovan won a bronze medal in U8 80m, Jake Feery finished in the top six in the final of the boys U12 cycling. It was a first attempt for both of these boys.

The girls U14 football team were amazing.  They played super games with each girl playing their heart out.  Ciara O'Meara deputising for Jessica Moloney in goal made outstanding saves. Nicole Delaney took every opportunity that came her way in the forwards.  Each player contributed  to the success of the team over their rivals Roscommon in the play off.

Indeed if the draw had been different they would be in the final.  They were up against Gainstown, Co. Westmeath in the semi-final, a team that had won all before them in Leinster but had it all to do to defeat the girls from Fethard.

They are a credit to their coachs, ‘Hammer’ Spillane, Sandra Spillane, Ed Collum and Willie Morrissey.  Community Games are very proud of all their achievements and look forward to more enjoyable times next year.