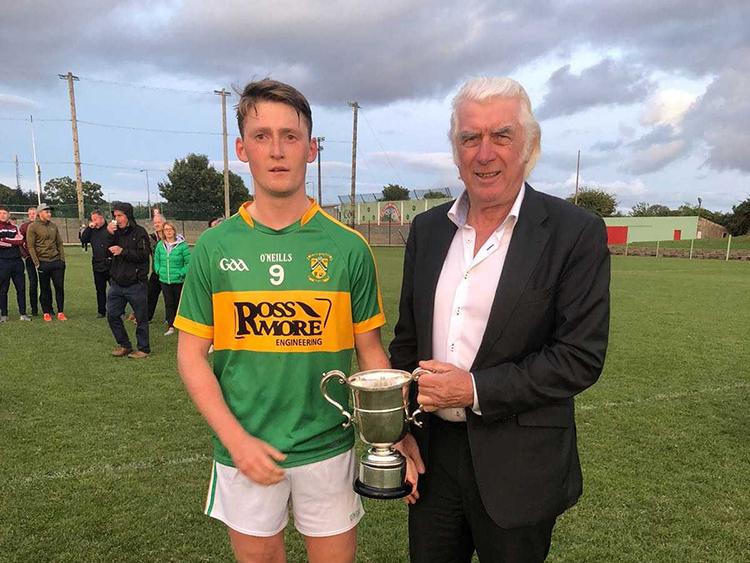 Clonoulty-Rossmore captured the Gleeson Concrete West Tipperary Junior A Hurling Championship for the third year in succession and their fifth title in seven years when they overcame the challenge of Emly in the final at Cashel on Friday evening.

The final scoreline doesn’t do justice to an Emly team who matched their opponents everywhere except on the scoreboard. Indeed, had they taken the chances that they created - both from frees and open play - especially in the first half they would have been closer to their opponents.

Clonoulty-Rossmore, on the other hand, had more firepower up front and found scores easier to come by. Their defense was very tight with Niall Shanahan at full-back giving a man of the match performance and James Heffernan at centre-back. This ensured a healthy supply of quality ball to their forwards who on the night made the most of their opportunities.

Clonoulty-Rossmore were quickly off the mark and attacked from the throw-in.

Paddy Ryan opened their account from a placed ball after two minutes to give them a lead that they would hold throughout. Paul Hayes then struck with a goal and a point and an Aidan White point put them six points up after nine minutes of play.

Emly replied with points from James Purcell and Paul O’Heney. Tom Butler got on the score sheet after fifteen minutes when he pointed from a tight angle.

Eoin Buckley started the second half where he left off and put four between the teams with a point from a free. Donncha Quirke pointed from far out before Buckley again added another from a placed ball. Paddy Ryan kept the champions ticking over with a long-range free, before Tom Butler hit two points in quick succession to stretch Clonoulty’s lead to seven with thirteen minutes remaining.

Emly came right back into this game, led by Michael Ring at number six and Chris Hennessy who put in a big shift on the night.

Try as they might they were unable to penetrate the Clonoulty-Rossmore defense for the all-important goal that was needed. Time after time Niall Shanahan and Pádraig Carew, in particular, cleared the lines while David Egan was ever alert in goal.

Eoin Buckley again pointed a placed ball with ten minutes remaining, but back came Donncha Quirke with his second point of the night and also a Paddy Ryan free.

Michael O’Donnell managed to find the Clonoulty-Rossmore net, but from the resulting puck-out Aaron Ryan (Rody) gathered well and raced through the centre to fire home Clonoulty’s second goal with three additional minutes on the clock.

This was a very strong Clonoulty team with leaders all over the field, huge experience and an ability to take their chances. Their defense was rock solid, Denis Murphy and Donncha Quirke held their own at midfield while their attack, as a unit, were always on top. Emly, on the other hand, did not turn their possession into scores, but never stopped trying.