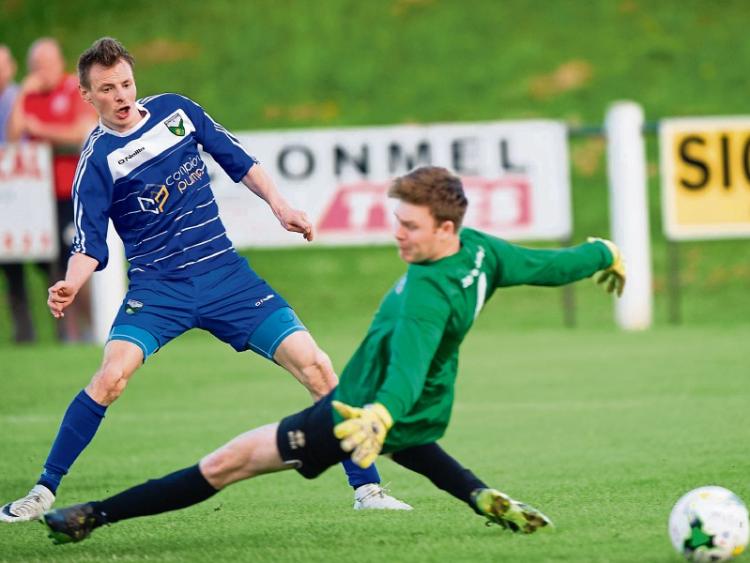 Glengoole United returned to the First Division this season after a number of years in the Premier League and showed that they will be a good bet to regain that status with a comprehensive win against Slieveardagh on Sunday.

The home side dominated right from the get go and had a number of chances to open the scoring before they finally did in the 26th minute courtesy of a Danny Rafter penalty kick.

Rafter made it two for himself and for his team ten minutes later with an excellent strike from inside the box, he wrapped up his hat trick right on the half time whistle to give his side a deserved three goal lead.

Slieveardagh must have thought this was bad enough, but things got worse deep into first half stoppage time for them when United got their fourth with a goal by Michael Kilcourse.

The second half turned into a casual kick about after that with Glengoole United happy to invite the visitors on to them while looking to catch them back on the break. They never did though as neither side could fashion another goal and Glengoole United took the points with a very good opening day win.

Two Mile Borris came down from the Premier League and were given a tough opening to their First Division season having to travel to play St Michaels seconds on Sunday morning.

The home side had a fair sprinkling of young players but they stood up to what was a tough physical battle for most of the early period. The deadlock in the game was finally broken in the 29th  minute when good work by Jonathon Kennedy assured the ball made its way to Adam McGrath to fire home.

Like busses though a second goal came along only a minute later with Borris levelling the game through a Cathal Moloney effort while the Saints were still celebrating.

Four minutes later however the sauce returned to the goose with the Saints retaking the lead again, with Liam McGrath finishing well after a lovely assist by Michael Frawley.

This was how the game went to the break and the second half never reached the heights of the first with a lot of huffing and puffing for no reward by either side.

In the end the Saints made it two for two for the weekend, along with their first team, and in doing so leaving Borris under no illusions that a trip back to the Premier League will not be one that passes easily.

Villa’s second kicked off their season in Division 1 Sunday morning against a Rosegreen side that always make it difficult to win points against.

The game started brightly with Villa on the front foot, with Adam Garrett and Jack Ryan Casey giving the Rosegreen back line plenty to think about.

A couple of early dangerous balls into the home area were also dealt with by a strong and commanding home defence, and the home side finally took the lead nine minutes before the half time whistle when quick thinking by Davy Carroll saw him play in Adam Garrett who took a couple of touches and rifled a right foot strike into the bottom corner.

In the second half the home side had the advantage of the strong wind which the visitors struggled to deal with at times and were under huge pressure in the middle of the pitch. Then on the hour mark a superb free kick from Mark Lennon was fumbled by the visiting keeper and Kevin Quinn got on end of it only for keeper to save again before the ball spilled out in front of Adam Garrett who made no mistake to put Villa two up with his second goal.

Villa could have added a few more goals as the game came to an end with the visitors causing little trouble to Shane McGuire's goal but had to finally settle for a two goal win.

Wilderness Rovers returned to the First Division after a number of years away when they had to travel to Cullen against a side that always make things difficult for teams who visit.

The home side had the better of the opening exchanges but were unable to breach the Clonmel sides defence. Eventually the Wildies worked themselves into the game and took the lead midway through the first half when Tucker Kennedy smashed to the net with an excellent finish.

After that the game petered out a little with neither side dominating for any significant spell and eventually finishing without any more goals to give the Rovers their first win of the season, along with three very welcome points.