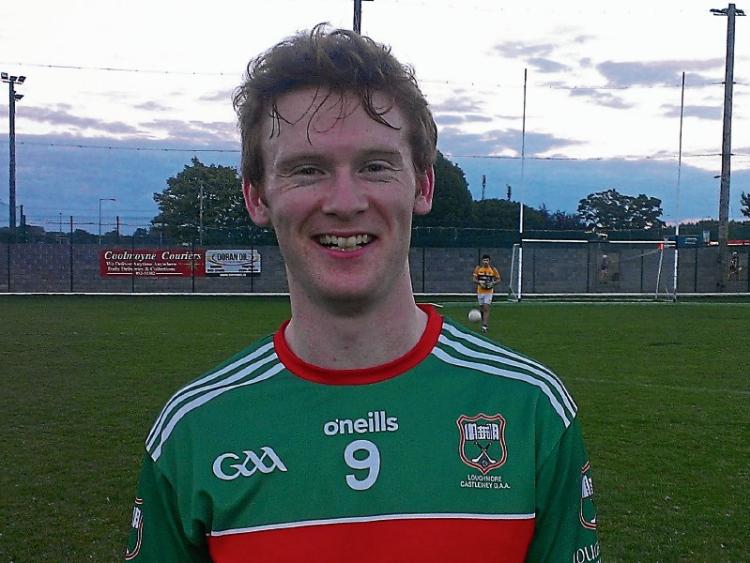 Loughmore/Castleiney midfielder Joseph Nyland who scored two fine goals for his side in their win over Kilsheelan/Kilcash at Cashel on Tuesday evening.

In this top-of-the-group county senior football championship clash on Tuesday evening at Cashel, between unbeaten sides Loughmore/Castleiney and Kilsheelan/Kilcash, it was the Mid Tipperary side who emerged easy 11 points victors in the end.

With both sides having already qualified for the quarter-finals, this game was played early to facilitate the Midmen who will face Thurles Sarsfields in their divisional hurling final on Sunday next. And Loughmore with this on their minds, were relieved to come through easily and unscathed..

The exact opposite was the case for the South Tipp outfit. Already without their influential county pairing of Bill Maher and Evan Comerford through injury, things went from bad to worse for Kilsheelan with a growing injury list by game’s end.

The contest was marred by a serious first half shoulder injury to Sean Martin when Loughmore’s Noel McGrath came down hard and heavy on the Kilsheelan youngster leaving him grimacing in agony on the ground. After Sean Martin was initially helped to the sideline for treatment the game resumed. But strangely the urgency of the situation was relayed back to match referee Paddy Russell by a doctor in attendance and the game was held up further. The Kilsheelan player was then removed  to hospital from the pitchside.

It was a situation that greatly annoyed the Kilsheelan management team who were already agitated by the circumstances of the injury.

And before half-time came the Kilsheelan corner-back Kevin Larkin was also carried off the field after falling heavily when contesting a high ball with Aidan McGrath. Already understrength before the game, these latest setbacks will do absolutely nothing for Kilsheelan side’s prospects as the senior football championship comes to the real business end.

But they started this game positively and had the first two points on the board through Mark Kehoe and Brendan Martin within three minutes. The experienced Loughmore then settled and levelled matters by the 12th minute with points from Eamon Connolly and Conor Ryan, the latter a possible goal chance if more composure was forthcoming.

The Martin brothers, Brendan and Sean, combined in a flowing move before Sean, who was showing very well up to the time of his injury, fisted Kilsheelan back in front in the 18th minute.

However, from the kick-out Loughmore worked a move through the middle and in a one-two between Joseph Nyland and Liam Treacy, Nyland got on the end of the move to blast to the net for the lead for Declan Laffan’s side.

A high-sailing effort for a point by Brendan Martin inched just inside the top of the upright to pull the lead back to 1-2 to 0-4 after 20 minutes but Kilsheelan wouldn’t score again in a 41 minute first half (and indeed for another eight after the break).

Following the hold up for Sean Martin’s injury, Loughmore began to control the middle of the park with Liam Treacy, John McGrath and Noel McGrath showing prominently. From there to the break they scored three unanswered points from John McGrath, Aidan McGrath and Eoin Ryan, the last point a length of the field effort before Ryan kicked from out on the left side for a 1-5 to 0-4 lead at the interval.

Inside a minute of the resumption John Smyth in the Kilsheelan goal was forced to make a full-length save from Loughmore captain John Meagher, before Loughmore did stretch their lead to five points in the 33rd minute with a Noel McGrath effort.

Kilsheelan’s best player on the night, Mark Kehoe, had a fine solo point eight minutes after the restart as his side were finding it increasingly difficult to cope with the stronger and faster moving Loughmore lads.

A nice crossfield pass from Liam Treacy found its way to John McGrath who pointed in the 40th as Loughmore further asserted authority around the centre. And then midway through the half they should have had a goal when Eamonn Connolly somehow palmed over when it looked easier to goal. And when John McGrath again pointed from 40 metres to make it 1-9 to 0-5 it seemed a lost cause for Adrian Walsh’s charges.

And soon afterwards it was exactly that when Loughmore banged in their second goal. Once again it was Joseph Nyland, combining, as he had in the first half, with Liam Treacy, before soloing 40 metres to drive low to the left corner..

Thereafter is was a case of playing down the clock with both sides in the last seven minutes or so.

Eoghan Kelly finished a good move with a deserved point for Kilsheelan after Donnacha Lonergan and Eoin Kehoe created the chance.

Joseph Nyland kicked a point to add to his brace of goals before Conor Ryan, for a hard-working effort, was rewarded with a white flag for Loughmore three minutes from time.

Brendan Martin (K) and finally Eamon Connolly (L) completed the scoring with Loughmore finishing 2-12 to 0-7 to the good and the honour of table toppers. There will be harder days ahead for them before the championship is over though.