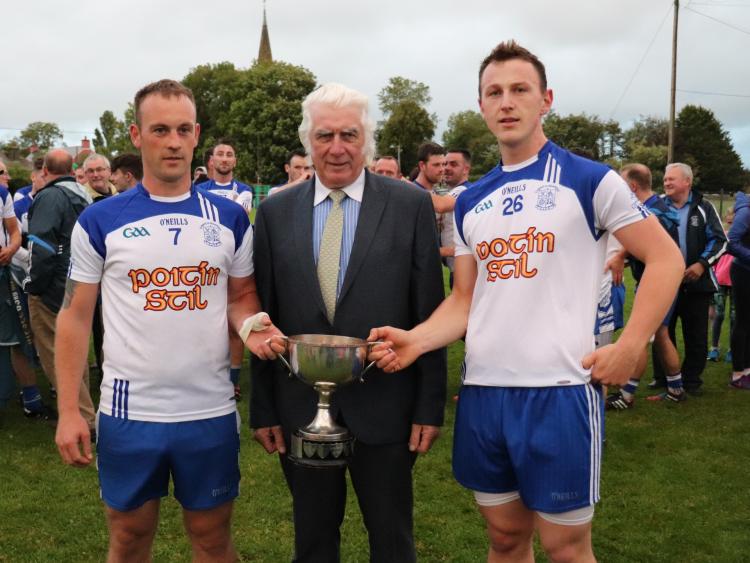 Cappawhite claimed their first AIB Tipperary West Junior A Football Championship title since 2008 thanks to a convincing win over Emly in Solohead on Saturday evening. When the sides met in the group stages of the competition it was Emly who came out on top, but a far more clinical Cappawhite side turned the tables on this occasion.

Ciaran Ryan and Willie Barry finished with 2-2 apiece for the winners while the pitch in Solohead was in excellent condition although the drizzle tried its best to put a dampner on proceedings.

The opening exchanges were fairly even as both teams tried to find their feet in the game.

Joey Lonergan opened the scoring with a point from play after three minutes, but his side failed to build on this.

Both sides had chances before Ciaran Ryan pointed from play to extend Cappawhite’s advantage.

The game was still a fairly even affair at this stage although Cappawhite were getting the better of the chances. Emly, to their credit, were attacking at every opportunity, but they struggled to break down the Cappawhite defence.

With eight minutes of the half remaining Cappawhite lead by four 1-2 to 0-1, but the remainder of the half was key to them winning the game as they out-scored their opponents 0-5 to 0-1 - points from Ciaran Ryan, Eoghan Ryan (two) and Willie Barry (two) to Shane Carroll’s point for Emly.

Any hope of an Emly comeback was put to bed fairly quickly in the second half. Tom Treacy pointed in the second minute and Ciaran Ryan added goal number two.

Cappawhite were creating plenty of chances and David Buckley got on the score sheet with a pointed '45 which was quickly followed by a point from Ger Ryan.

Cappawhite ahead on the three-quarter mark 2-10 to 0-2. Cappawhite pressed their foot on the gas in a three-minute period as the flood gates opened with three goals from Ciaran Ryan, Willie Barry and David Buckley.

Emly did rally somewhat in the closing stages and Michael O’Donnell hit a thunderbolt of a shot to the top corner, but it was too little too late.