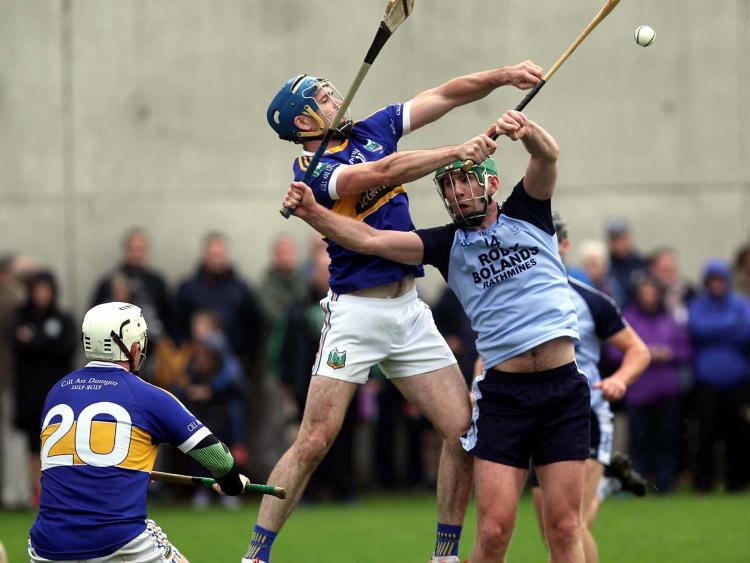 The final scoreline suggests a thriller, but it was far from it as the Kiladangan men proved far too good for Nenagh Éire Óg in a Hibernian Inn North Tipperary Senior Hurling Championship semi-final replay played at a wet Templederry last Saturday evening.

The winners - except for the opening quarter - were always in control and led 1-9 to 0-7 at half-time. Playing with the stiff breeze in the second half they soon transformed their lead into a 3-17 to 2-10 advantage by the 62nd minute. Nenagh found new energy in those final minutes and made the scoreline look better with two injury time goals before a Billy Seymour point in the 64th minute made sure of victory for Kiladangan.

Seven goals should provide enough talking points, but they were over-shadowed by a number of minor outbursts when players from both sides were involved in pushing and shoving with some fouls reaching the edge which required a number of yellow cards issued before referee Kieran Delaney finally lost his patience and sent Willie Connors to the line for a second yellow card offence in the 55th minute.

But for all of that there was plenty to enthuse about, especially from the Kiladangan side for whom Alan Flynn, David Sweeney, James Quigley and Ciaran Kelly were true leaders. Ciaran Kelly had a tremendous second half and scored four points from play. Kelly’s surge put daylight between the teams with his fourth point coming in the 49th minute to force Kiladangan 2-16 to 1-10 clear and en route to the North final against Kilruane MacDonagh's next Sunday.

Nerves and tension spoiled the first dozen minutes with scores low in an error-strewn period. Then in the thirteenth minute a long ball from David Sweeney reached his intended target and Darragh Egan used his strength to evade John Brennan before firing a low ball shot past Shane Hennessey in the Éire Óg goal who had no chance.

Kiladangan were 1-4 to 0-2 in front by the 17th minute. Nenagh Éire Óg fought back, but their wides tally increased to five. Kiladangan were winning the fifty-fifty tussles and making the scoring opportunities also and with two minutes to the break Paul Flynn beat his defender before scoring a point from virtually the end line to give Kiladangan a six-point lead. Play continued as Michael Heffernan and Darragh Egan swapped frees with Egan’s total reaching 1-3 before retiring at half- time and Kiladangan led 1-9 to 0-7.

Kiladangan increased their lead by two before Nenagh Éire Óg hit back when Adam Healy had to work hard before kicking home a goal in the 36th minute.

The big crowd warmed to an exciting second half, but Kiladangan took complete command when an intended clearance by goalkeeper Shane Hennessey was blocked down by Paul Flynn. Flynn had much to do as he ran down the end line before firing a right-handed shot to the net.

Ciaran Kelly’s tour de force dominated the next few minutes as he registered four points from play - his fourth a reply to Michael Heffernan picking up his sixth and final point to make it 2-16 to 1-10.

A Willie Connors free stretched the lead to ten before he was sent to the line in the 55th minute.

By the time the game reached the hour mark one felt there was little more to see, but a Paddy Murphy goal energised the Nenagh Éire Óg following. But Kiladangan were having none of it as Billy Seymour raced in behind the Nenagh Éire Óg cover to sink a low ball past Hennessey on sixty-two minutes.

A minute later Jake Morris scored Nenagh’s third goal. Éire Óg continued to pressurise the Kiladangan defence and a minute later a foul on Michael Heffernan led to Tommy Heffernan stepping up and firing a low free to the net.

A four-point deficit excited the attendance as there was another minute to play, but a long clearance by Kiladangan led to a Billy Seymour point which sealed a good win for the men in blue and gold.