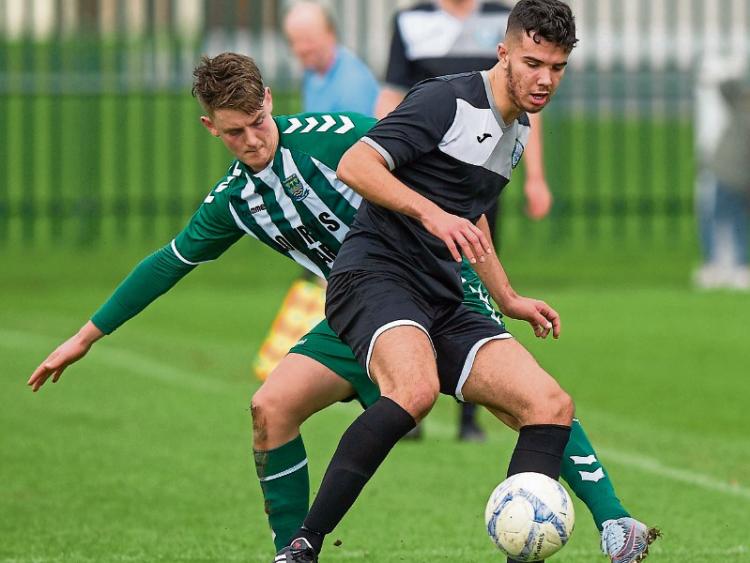 Shane Ryan (stripes) was on the mark for St. Michael's in their 4-0 win over Clonmel Celtic.

St Michael’s maintained their winning start to the season and always had the upper hand here against a Celtic who played very deep, and who looked like they were more concerned with keeping the scoreline down, rather than engaging in the kind of battle.

After a solid if not spectacular start, the home side took the lead on fourteen minutes when Jimmy Carr beat Ben Cooney from an angle to put his side in front. Wallace Bourke did well on the half hour mark to deny Olly O'Driscoll, and shortly afterwards David Slattery's flick went just wide from a Shane Ryan to keep the difference between the sides to one goal.

The hosts brought on fresher legs and minds at the beginning of the second period and finally got the second goal their play deserved only two minutes in when Colin Bargary did well to pick out Willie Armshaw who crossed deep for Pa Quinn to head home.

It was 3-0 less than ten minutes later when Adam McGrath crossed for Shane Ryan who found the corner of the net from an angle, and four just after the hour mark when John Connery did well to create space and hit a shot that Ben Cooney could only parry, and Quinn followed up with his second goal.

The visitors best chance came in the sixty seventh minute when Peter Dowd hit just wide after a good move as Celtic played with a bit less inhibitions. But they were never going to get anything out of this game after coughing up four goals, and must now focus on getting some points on the board.