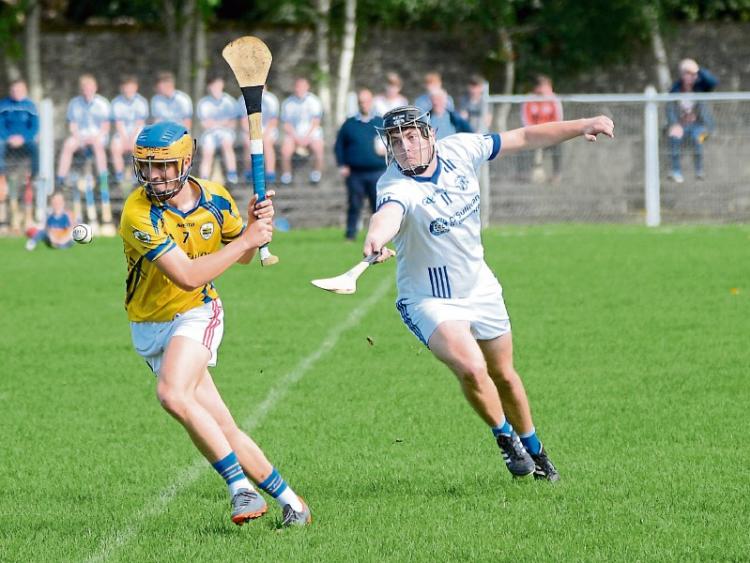 Dean Finn (Skeheenarinky/Clonmel Og) gets his shot away despite the effort of St. Mary's Donal McCabe to hook during Sunday's South Minor ‘A’ hurling semi-final played at Cahir.

The continued fine weather of the summer aided a tight and tense tussle in Cahir on Sunday afternoon in this Minor A divisional semi final pairing between Skeheenarinky/Clonmel Óg combination and St.Mary's.

A bright start from the combination side was tainted somewhat with erratic shooting and punished further when a goal against the run of play was flashed to the net by Enda Dunphy of Mary's.

Tomás Vaughan and Dunphy then traded points from frees before a long ball into the Mary's defence ended up in the net without much resistance.  Shortly afterwards, Vaughan added another green flag with a fine individual effort giving the Combo a four point advantage.

Subsequently, Dar ragh O’Keeffe at centre forward for the town side finished off a good passage of play to reply with a goal and it really was game on for the good sized attendance.

The Combo's Cian O’Sullivan’s  strong running was causing St. Mary's headaches another forage yielded a goal kicked from the ground through a crowd of players seizing the lead back for the Skeheen/Og once again.

Further exchanges between Dunphy and Vaughan from place balls were complimented by scores from   Darragh Brennan and Thomas Hickey of the Combo and David Barry of Mary's leaving the half time score at St. Mary's 2-05 Skeheen/Og 3-03.

The second half action saw both teams rearguards tighten up with goal chances few and far between.

Going the final stretch Vaughan gave the Combo the lead from another free which seemed to be enough to seal the win but a tense passage of play around the middle of the field finished with a blow of referee Sean Lonergans  whistle indicating a free for St.  Mary's which  Enda  Dunphy duly  slotted over.

One final puck-out from Sknheen/Clonmel Og keeper Jack Downey landed deep in Mary's territory before being played into the corner toward Rian Hennessey who gathered and rounded his man in tight confines to slot over from a narrow angle to the elation of the Combos followers resulting in a one point win for the Skeheen/ Clonmel Óg side who advance to play Moyle Rovers in the South Final.