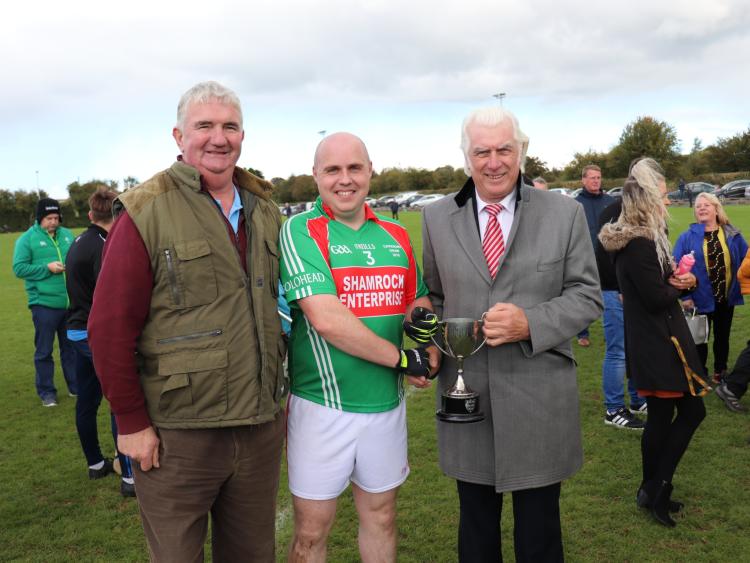 Solohead claimed a first Shane Hennessy Agri-Advisor West Tipperary Junior B Football Championship title in twenty-two years when making it third time lucky when they got the better of Clonoulty-Rossmore in Golden on Sunday afternoon.

When the sides met in the final game of the group stages two weeks ago they could not be separated. So, a close battle was expected.

Clonoulty-Rossmore went into a first final following a solid campaign while Solohead were likewise, but they had the added pressure of playing in their third final in-a-row, having lost the last two.

The pressure may have been on the latter, but they set about their task from the off when putting their stamp on the game. Playing with the advantage of a strong breeze Solohead set the tone attacking from the off.

Eoin Riordan opened the scoring in the second minute. Solohead’s Paul Ryan had the ball in the net soon after, but it was ruled out for a square ball. Solohead eventually found their scoring boots and Josh O’Brien hit two points in a minute which included a superb free from his right hand side which would normally be more suited to a left-footed kicker.

Clonoulty-Rossmore were struggling to find scoreable opportunities, but Ger Mockler opened their account in the thirteenth minute.

Solohead’s confidence was up and they were in control in most sectors including their half-forward line of Michael Fitzgerald, John Joe O’Brien and Chris Kirby. John Joe O’Brien then kicked a superb point to extend Solohead’s advantage. Two minutes later he added another one. Eoin Riordan, now on free-taking duties, kicked a point from a place ball and this was soon followed by John Joe O’Brien’s third point from play. Aidan Loughman rounded off the scoring for Clonoulty-Rossmore, but John Joe O’Brien had the final say when he pointed from a sideline. Solohead were well in control leading 0-8 to 0-2 at the break.

Clonoulty-Rossmore started the second half on the attack and with the aid of the breeze they looked to make a comeback. They won a free in the opening minute, but failed to convert.

Solohead went down the field where they won a free and Eoin Riordan made no mistake.

Like the first half scores were slow to come by in the opening ten minutes and it was eight minutes later before Eoin Riordan pointed another free. He quickly followed this with his third pointed free of the half. Solohead’s determination to get over the line was evident when on the quarter mark wing-back Brendan Collins dived to block what could have been a certain Clonoulty-Rossmore goal.

Ger Mockler got Clonoulty-Rossmore off the mark for the second half with a pointed free, but they were now well out of contention. This seemed to galvanise Solohead and when James Dee made a good run forward he found the target. Josh O’Brien and Ger Mockler swapped points, but it was Solohead who ran out victors by nine points to bridge a twenty two year gap since their last title.

Afterwards West Tipperary Board Chairman John O’Shea presented the trophy to Noel Kennedy and Christopher O’Connor, the first Solohead players since James O’Doherty who captained Solohead in 1996 to lift the trophy. Ironically their last success in the competition was also in Golden in 1996 where they defeated Galtee Rovers.

It was an all-round team performance from Solohead who lead with a strong half-back line in Brendan Collins, Philip Doherty and Denis O’Shea. James Dee and Paul Ryan were strong in midfield while John Joe O’Brien hit four superb first half points. Clonoulty-Rossmore were best served by Aidan Loughman, Paddy Ryan, Ger Mockler and Nathan Slattery.