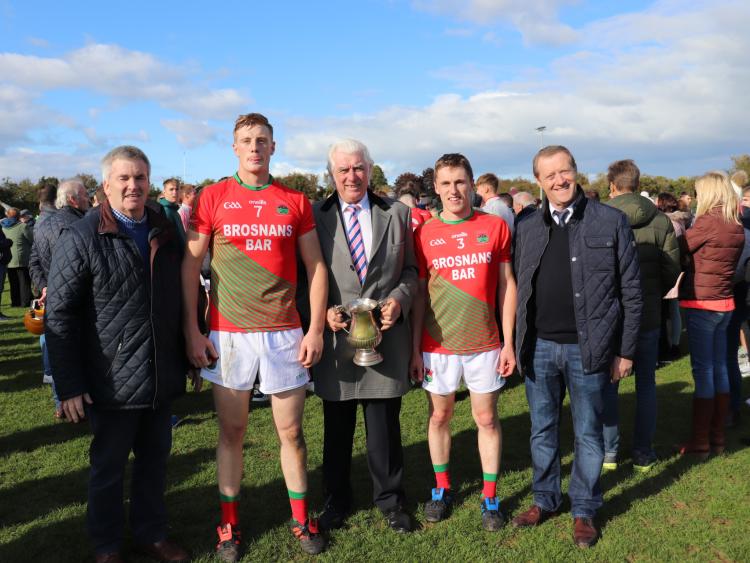 Cashel King Cormacs claimed their second Tipperary Co-Op West Tipperary Junior B Hurling Championship title in three seasons when they edged out Knockavilla-Donaskeigh Kickhams at the second attempt in Golden on Sunday afternoon - two weeks previously the sides could not be separated, but a strong second half showing from Cashel King Cormacs on this occasion saw them out-score their opponents 0-12 to 0-4 to claim the Jamise O’Donoghue Cup.

Cashel King Cormacs started on the attack from the off and quickly had their account opened thanks to points from Adam Skeffington and Brian Fitzpatrick. Aidan Butler opened the Kickhams account in the fourth minute, but they were struggling to find a foothold in the game early on.

Cashel could have been further ahead, but for some missed opportunities before Thomas Ryan pointed from a placed ball. Kickhams were to receive a huge boost in the next five minutes. First Daniel Lonergan reacted to pull first time to the net following the dispossession of the Cashel goalkeeper. Five minutes later when a point looked to be the safer option the ever-reliable Aidan Butler sent a rasper of a shot to the far corner.

Kickhams were dealt a double whammy in a matter of minutes. Thomas Ryan had to leave the field with injury while his replacement Peter Comerford also had to withdraw minutes after coming on.

Cashel hadn’t scored since the second, minute but Robert Anglim changed that in the nineteenth minute with their third from play. This was immediately cancelled out at the other end by Turlough Breen. Jonathan Walsh pointed from a free while Brian Fitzpatrick pointed from play to keep Cashel in touch. Daniel Lonergan and Thomas Skeffington also swapped points before goalkeeper Paddy Ryan added a point from a long range free to see Kickhams ahead at the break 2-5 to 0-6.

Cashel saved their best for the second half. Jonathan Walsh cut the deficit on the resumption with two pointed frees before Paudie Slattery got Kickhams off the mark also from a place ball. Cashel were now finding their rhythm and Jonathan Walsh pointed a '65. This was quickly followed by their first from play in the second half from Robert Anglim. Paudie Slattery again brought the gap to three points with another from a place ball.

Cashel responded with three points in-a-row as Jonathan Walsh and Brian Fitzpatrick added points to level up the game for first time since the ninth minute. Both sides had chances to go into the lead, but both were guilty of poor shooting.

When Jonathan Walsh pointed a free with six minutes of normal time remaining he put Cashel one up and they never looked back. Both Adam Skeffington and Adam Kennedy pointed from play either side of a Paudie Slattery free. Cashel were in control, but they could not shrug off the Kickhams challenge. Jonathan Walsh put them three up, but Paudie Slattery brought the gap back to two with another pointed free. Adam Slattery hit his second point of the half to put Cashel three up and despite Kickhams trying to work a late goal their defence was solid.

Afterwards Alan Cummins and Paddy Morrissey received the Jamise O’Donoghue Cup from West Board Chairman John O’Shea and the representatives of the sponsors Kieran Maguire and Willie Ryan (Tipperary Co-Op).

Cashel King Cormacs were best served by Robert Anglim and Adam Kennedy who formed a strong midfield partnership. Alan Cummins and Ross Doyle led the defence while in the forwards Brian Fitzpatrick and Robert Maxwell were to the fore with Jonathan Walsh unerring from frees. Best for Knockavilla Donaskeigh Kickhams were the ever-reliable Aidan Butler, Shane Farrell, Conor Horan and Paudie Slattery.