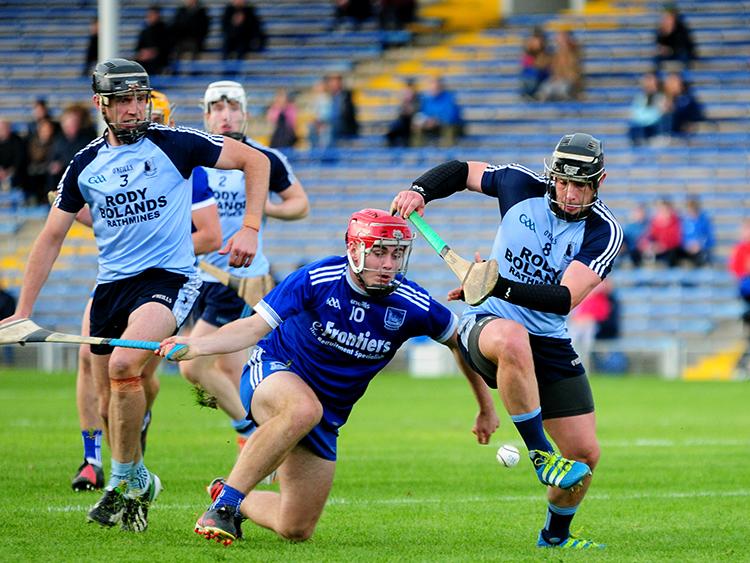 Thurles Sarsfields’ bid for a record-equaling five county senior hurling titles in-a-row was emphatically halted by Nenagh Éire Óg at Semple Stadium, Thurles on Sunday last at the semi-final stage of the Tipperary Water County Senior Hurling Championship and in a manner that has most followers fancying them to go on to win their second county title (their only previous success being in 1995).

Nenagh came to Semple Stadium with a specific game plan and they executed it to near perfection. Their defense choked an under-performing Thurles attack, but equally important was the quality of their deliveries to their attack which was copybook stuff. And, nobody befitted more than Michael Heffernan, who, despite the attentions of inter-county man Michael Cahill, was an inspiring figure all through when hitting nine points (six from play).

Éire Óg needed to start well and it could not have gone better for them - a Michael Heffernan point after twenty-six seconds, followed a minute later by an Andrew Coffey goal and points from Conor Ryan and Jake Morris all materialized inside the opening six minutes.

At the end of the day it was this blistering 1-3 start which was decisive and gave the Nenagh Éire Óg lads the cushion they needed to sustain them when a stuttering Sarsfields finally found their mojo to mount a vigorous last quarter rally in an effort to wipe out the ten-point three quarter deficit.

But that opening burst also underlined the frame of mind in the Nenagh camp. They meant business and recognizing the vulnerability that the champions have shown all through this campaign they went for the juggler from the start and having gained the advantage had the bottle to protect it when the Thurles surge came at them during in the last quarter.

It was impressive stuff.

To their credit Sarsfields went out like champions. Despite playing second fiddle for three quarters of the contest their pride demanded a fitting climax to their four-year reign and they delivered it with gusto.

Paddy Murphy’s goal in the 44th minute put Nenagh 2-13 to 0-9 ahead and their place in the final was all but sealed, but just as in the quarter-final against Kilruane and in the Mid final against Loughmore the Thurles lads didn’t do capitulation and roared into the game in a last desperate bid to save their crown.

Denis Maher’s goal in the 49th minute sparked the Thurles charge and four points followed in rapid succession. They were a goal down with three minutes to play and though Nenagh again extended their advantage to seven in injury time Sarsfields had one last blast - Ronan Maher’s free in the 65th minute tested the net to leave only a goal in it. A similar effort a few minutes earlier whistled over the bar - it was as close as that at the finish, but Nenagh Éire Óg held on for a deserved success.

It was a thrilling finish to a contest which kept the 5,346 gathering interested if not on their toes as the prospect of the champions being dethroned became more and more likely as the game progressed.

After the opening Nenagh flourish Sarsfields - with Pa Bourke prominent and Pádraic Maher driving them on from the sweeper role - began to settle and by the 19th minute were 0-4 to 1-5 adrift. Dáire Quinn and the Maloneys were mopping up much of what Sarsfields directed their way and the Nenagh lads produced another flourish before the break - three Michael Heffernan points and another from brother Tommy left them sitting pretty at half-time (1-10 to 0-5).

Sarsfields were in trouble and they knew it. Hamstring victim Lar Corbett was called off the bench and then to add to their woes Michael Cahill damaged his knee - an injury which forced his withdrawal after forty-one minutes.

The sides shared six points in a largely undistinguished third quarter, but Paddy Murphy’s goal for Nenagh in the 44th minute (thanks to a Philip Hickey assist - his second of the day) appeared to have secured Éire Óg’s spot in the final - they now led 2-13 to 0-9.

Pride or desperation or possibly both drove Sarsfields on. Stephen Cahill set up Denis Maher for a smartly-taken goal in the 49th minute; Rory Purcell and Aidan McCormack followed up with points, Conor Stakelum had a drive for goal saved and Ronan Maher blazed over the bar from a twenty-meter free as the Thurles lads turned up the heat.

Now it was Nenagh’s turn to show their mettle and after Michael Heffernan and Aidan McCormack swapped points Michael Heffernan, James Mackey and Philip Hickey and Jake Morris whipped over points for a seven-point lead after sixty-two minutes.

Still Sarsfields poured forward. Pa Bourke pointed a free and in the 65th minute Ronan Maher blasted to the net from a free to cut the lead to a goal. Time was against them, however, and referee Fergal Horgan’s long whistle signaled great celebrations in the Nenagh camp as their quest for a second county title remained on course.

It was Nenagh’s day and overall they were the better team winning most of the key battles. They exploited the spacious Thurles pitch to the fullest and the quality of their approach play was of the highest order. While it could well be said that Michael Heffernan was the difference between the teams on the day Pearse Morris, Philip Hickey, Paddy Murphy, Dáire Quinn and the Maloney brothers (Noel and Hugh) were hugely influential.

Nenagh’s task now is to put this game behind them. No medals were awarded on Sunday last and the focus must be on the clash with Clonoulty-Rossmore in the final.

Nenagh Éire Óg showed last Sunday they have the quality to succeed, but they must again convert potential into performance to realise their dream.

Sarsfields have not had a good year. Injuries to key players hampered their campaign and in particular that to inter-county man Billy McCarthy which appeared to cast a cloud over their performances, but with Larry Corbett and Conor Lanigan also sidelined and then Michael Cahill forced out of the game it was never going to be easy.

They fought like champions to match the five-in-a row previously achieved by the club from 1955-59 and again from 1961-65 and the challenge for them now is to regroup for next year with some new blood needed to freshen up a team that has done a lot of hurling.

As ever Pádraic Maher was the driving force behind the team with Cathal Moloney, Stephen Lillis, Stephen Maher, Aidan McCormack, Stephen Maher, Pa Bourke and Ronan Maher all doing their utmost to turn the tide. Also, Rory Purcell did well when introduced.