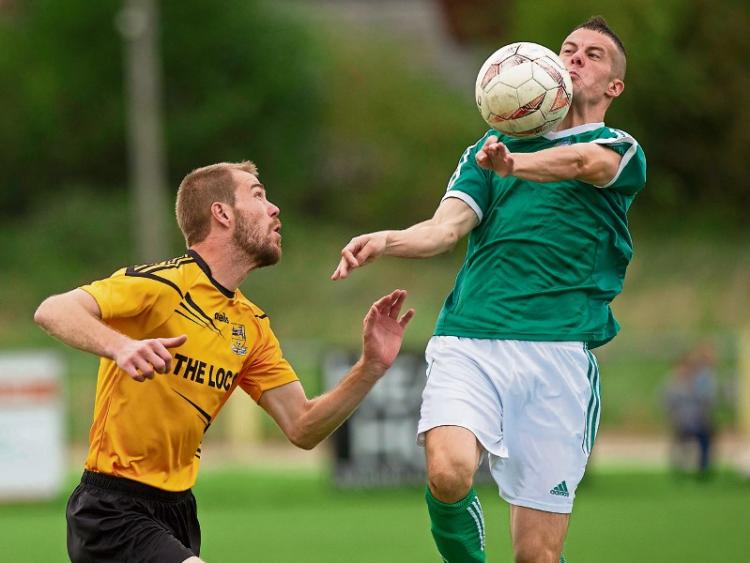 Kyle Ryan (Clonmel Celtic) brings the ball under control with his chest as Town's Graham Guiry moves in to challenge in the Premier League derby game played at the Cashel Road venue on Sunday last.

Town suffered their first home and league defeat of the season going down by the odd goal in five in another well contested Clonmel derby on Sunday last.

Celtic took the lead after eight minutes when a ball was cleared but deflected off Sean O’Hara and Kyle Ryan was on hand to nod home the opener.

Craig Guiry had the sides level in the 25th minute but Celtic re-established their advantage on the half an hour mark again Ryan, following a defensive mix up to make it two goals to one to the visitors at the half time break.

Niall Prendergast (Clonmel Celtic) and Keith Browne (Clonmel Town) battle it out in the air.

The hosts fell even further behind five minutes after the restart from a free kick at the edge of the box, but just ten minutes later Jamie Ahearne pulled one back when he shot home from onside the Celtic area, to make it an interesting last half hour.

Town spurned a huge chance late on to equalize when Levi Whelan missed from the spot, and in the end the spoils went to the visitors, who badly needed the three points after a disastrous start to the season by their lofty standards.