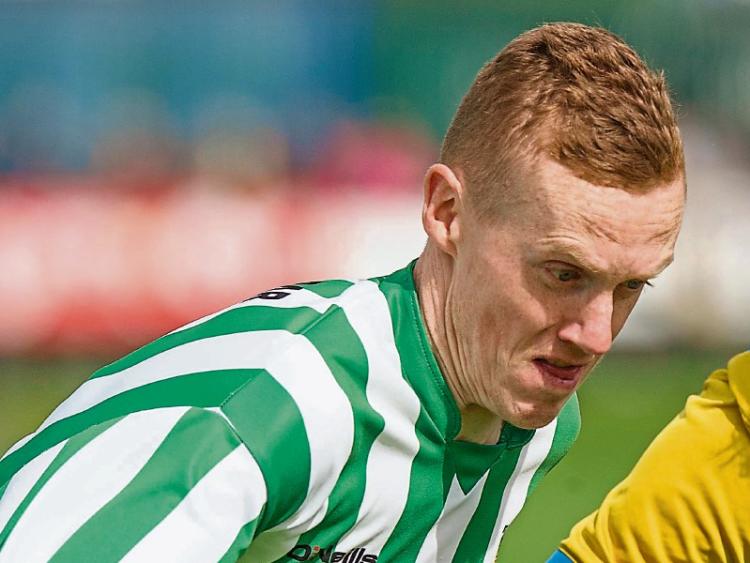 Jimmy Carr scored St. Michael's second goal in their 3-0 win over Peake Villa at the weekend enabling the Saints to stretch their lead at the top of the table.

This highly anticipated tie between the top two in the Premier League turned on two quick fire goals from the reigning champions, who have shown once again that they will be hard to beat to another title come next May.

The contest was even throughout the early part of the game with the home side probably having the more chances, as they saw efforts by Richie Ryan and Pa Quinn go a begging. Tommy Teer and Mikey Wade also created half chances for the Thurles side, without ever really threatening the Saints stopper.

In a game like this, the first goal was always going to be vital and it went to the home side just after the half hour mark when Pa Quinn did well to get goal side of the Peake defence and the ball dropped kindly for him to score from six yards. Peake had hardly recovered from this blow when Saints went two up minutes later, this time seeing John Connery cross for Jimmy Carr who found the net at his second attempt.

It could have gotten worse for the visitors as the Saints were rocking at this stage, but they managed to steady the legs and were still standing when the half time whistle went.

They hadn’t fully recovered however and the game was effectively over only three minutes into the second half when Jimmy Carr fed Shane Ryan in space, and his left foot angled effort nestled in the corner of the net to make it 3-0.

The latter stages were very open as Peake pushed forward and left gaps at the back the home side were unable to add to their tally on the day. Adrian Walsh in the home goal had little to do in goal behind a defence that played very well, and showed that they are not for budging from the top of the table anytime soon yet.