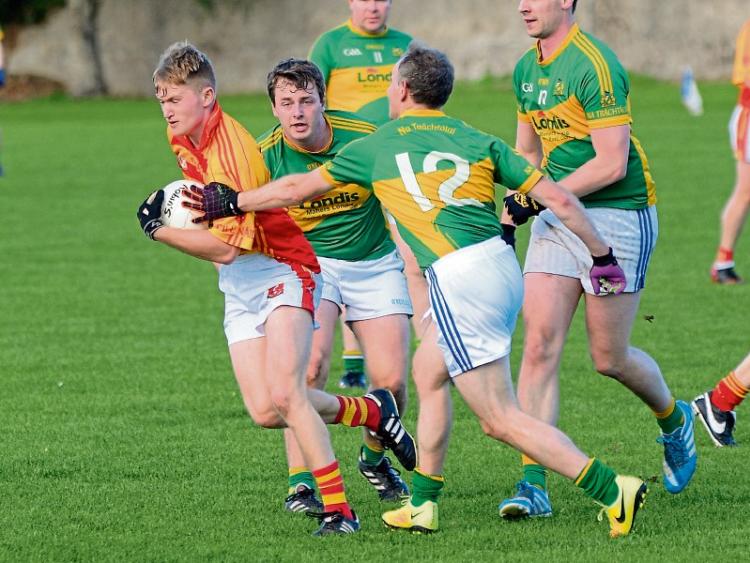 The line up is now complete for this year's South Junior B Football showpiece, with a very impressive Killenaule joining champions Clerihan in the final, on foot of an emphatic 11 point victory over an off colour Commercials, in Fethard last Saturday afternoon.

Unbeaten through league and championship this year, Killenaule effectively had this one wrapped up by halftime, with Declan Fanning and Gerry Kennedy running amok upfront. Both players combined with scores for each other inside five minutes, and in the eighth minute Fanning set up Kenneth Browne for a great goal, before Commercials registered their opening point from full forward Trevor Creed at the other end.

Kennedy added another, which was followed up by a great point from Luke Ryan, whose dashing run caught the Commercials defence unawares.

Killenaule were rampant, dictating the game on their terms, with Fanning and Kennedy combining for yet another point.

Commercials were then unfortunate to lose right half back David Hoyne to injury as Brian O'Hara doubled the Clonmel side's quota on 22 minutes.

Killenaule saw out the remainder of the half courtesy of two more Declan Fanning points, and headed for the interval with commanding 1-7 to 0-2 lead. On resumption, Commercials did manage to get the opening score, this time through James Keating, but the Gerry Kennedy and Declan Fanning double act continued, with a point apiece to all but seal victory.

With the game now well beyond them, Commercials started to improve as points from Emmett Ryan and Brian O'Hara attempted to restore respectability.

Then all hope for Commercials was well and truly lost, as the marauding Luke Ryan nipped in for Killenaule's second goal of the evening. Eoin Butler followed it up with a fine point, and by now Killenaule cruising.

Commercials kept at it, in fairness, and should have yielded more scores in the second half, but did manage a couple more from Trevor Creed and Emmett Ryan.

Then finally Killenaule substitute Graham O'Connor got in on the act, pointing, having gone close for goal just beforehand, and with the game petering out, Darragh O'Keefe pointed for Commercials, who although improved in the second half were well below par on this occasion.

Killenaule, weren't in the least bit flattered by this scoreline, enjoyed the lion's share of possession, controlled the game throughout and took their chances when they came their way. Their swift attacking play, allied to a strong possession game will make them very hard to beat.

A cracker against Clerihan, is in store, probably next weekend.