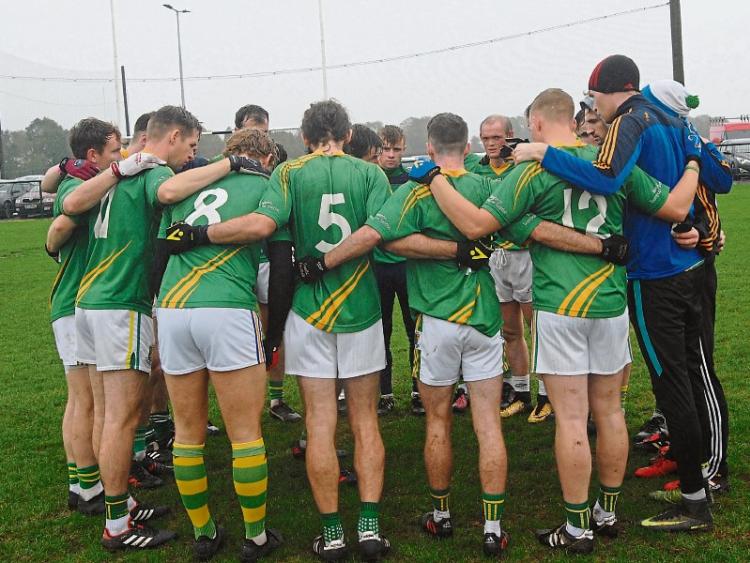 Moyne/Templetuohy who booked their place in the County Tipperary IFC Final with a win over Grangemockler/Ballyneale at Boherlahan on Saturday.

A totally dominant second half display from Moyne/Templetuohy in which they scored 3-5 without reply saw the Mid Tipp side comfortably advance to the County Intermediate Football Championship final in which they will now meet Golden/Kilfeacle.

It was a totally unexpected conclusion to a game which saw the sides go in level at the break on 0-6 apiece, having been level on five occasions during the opening half hour. One felt at that juncture that the game would be nip-and-tuck right to the finish. However, a pivotal two-minute spell in the third quarter where Moyne/Templetuohy banged in two goals turned the game on its head and thereafter there was only going to be the one winner.

Indeed at the commencement of the second half Grangemockler’s Manus McFadden was denied a goal by an excellent save by Joseph Leahy in the Moyne goal and had that gone chance in, who knows. But Moyne seized the initiative soon afterwards and two green flags in the 37th and 38th minutes by John Hassett and a penalty by Odhran Lloyd (won by Diarmuid Fogarty) went a long way towards booking their place in the county decider.

The third goal, the coup de grace, arrived in time added-on when John Hassett and Conor Bowe combined in a one-two before Bowe palmed home into an empty net for a staggering 14 points win for the Mid men that was unimaginable throughout the first half.

The game, played at Boherlahan in an unrelenting heavy drizzle, produced an opening period that was very competitive and entertaining despite the difficult underfoot conditions and a slippery ball.

Three times over the first quarter the sides were level as they went point for point. Scores from Odhran Lloyd, Louis Everard and John Hassett (free) for Moyne were matched by three Tom Kennedy points (one a free) for Grangemockler.

While Moyne were having the better of possession some bad wides were letting the South team off the hook - the Mid side would kick eight wides in the first half. However, two points in the 16th and 20th minutes, from Pearse Meade and Odhran Lloyd after a good break by Jason Bergin, put Moyne two clear for the first time in the game.

John Lyons was Grangemockler’s stand out player of the first half and it was one of his bursting breaks from centre-back that helped create a point for Thomas Grinsell to narrow the gap to the minimum in the 22nd minute.

Jack Lyons levelled matters soon afterwards before Grinsell kicked his side into a 0-6 to 0-5 lead in the 27th minute. As things turned out this would not alone be the last score of the first half for Grangemockler, but indeed their last in the whole game.

Moyne/Templetuohy who qualified for the county intermediate football final with a win over Grangemockler/Ballyneale.

John Hassett then converted a free in the 31st minute to send the sides to the dressingrooms level and with the prospect of an exciting second half to come.

However, the second half was anything but what we had expected. After Joseph Leahy’s save from McFadden, Odhran Lloyd kicked Moyne in front in the 35th minute and soon the brace of goals had them seven points clear after 38 minutes.

The double-whammy tore the heart and soul out of the Grangemockler challenge and the last 20 minutes of the contest belonged to Phil Bowe’s side.

Two further frees from John Hassett stretched the lead out to 2-9 to 0-6 by the 50th minute with the likes of Diarmuid Leahy, Jason Bergin and Tom Hassett ruling the roost around the centre of the park.

A superb individual point from Conor Bowe and a point from play from John Hassett again followed late in the game, before Bowe wrapped the game up with his side’s third goal in added time.

For Moyne, Cathal Ely, Louis Everard, Pearse Meade and Diarmuid Leahy were solid at the back. The midfield partnership of Jason Bergin and Tom Hassett took over almost completely after the break while Odhran Lloyd and John Hassett were the scorers-in-chief for the winners.

For Grangemockler/Ballyneale this was a very disappointing end to a campaign that many thought might lead to a county title. In the end they were left to scratch their heads as to how they died such a death in the second half.

But the likes of John Lyons, Peader Downey, JP Wallace, Tom Kennedy and Manus McFadden tried their utmost on a dirty day in Boherlahan that they will be anxious to forget and quickly.

John Hassett was top scorer for Moyne/Templetuohy contributing 1-5 to their win over Grangemockler/Ballyneale.