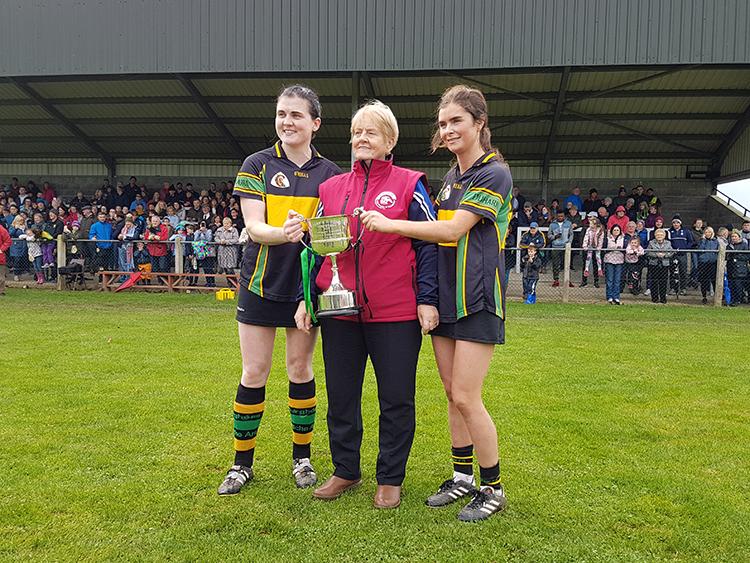 A brutally efficient display ensured that Burgess-Duharra collected the club’s seventh successive Tipperary senior Camogie title after a one-sided final contest with Clonoulty-Rossmore at The Ragg on Saturday afternoon. Although out-gunned in their first-ever appearance in a senior decider Clonoulty-Rossmore can take a huge amount from this season and departed the venue with their heads, rightfully, held high.

By the 15th minute Burgess-Duharra were five points up, by the break eleven clear and by the three-quarter mark sixteen ahead thanks to a dominant display.

Amy Kennedy and Eimear McDonnell notched 1-10 from play between them, but those forwards will be the first to acknowledge the quality of ball delivered inside by players like Caoimhe Maher, Ciara McKeogh, Jenny Grace, Ciardha Maher and Ruth Barry who dominated the physical collisions in the middle third.

This was a heart-breaking defeat for Clonoulty-Rossmore, but they are an up -and-coming side who will, no doubt, learn from this experience and come back all the stronger for it.

A Cáit Devane free in the eighth minute tied the game, but Burgess-Duharra then fired 1-6 without reply to take complete and utter control.

Eimear McDonnell, Jenny Grace (two frees) and Amy Kennedy (three) helped themselves to the points and even though Eimear McDonnell saw a goal-scoring opportunity blocked in the 19th minute the defending champions struck for the opening goal of the game in the 22nd when the misfortunate Clonoulty-Rossmore ‘keeper Mary Therese Mockler misjudged an Aisling Cremin delivery (1-7 to 0-1).

Eimear Burke fired over a reply for Clonoulty-Rossmore and although Cáit Devane and Eimear Loughman added to their side’s tally late in the half Burgess-Duharra led 1-12 to 0-4 at the break thanks to further points from Tara Kennedy, Eimear McDonnell (three) and the relentless Ciara McKeogh.

Casey Hennessy tried to rouse her side with a fine point immediately after the break, but Clonoulty-Rossmore were struggling to build a platform in the middle third while Jenny Grace (free) and Eimear McDonnell added to the champions’ tally before Trish O’Halloran found Eimear McDonnell with a searching clearance in the 40th minute; McDonnell’s diagonal ball picked out Amy Kennedy and the joint-captain of the side buried a terrific three-pointer (2-14 to 0-5).

Eimear McDonnell and Ciara McKeogh added further Burgess-Duharra points before Clonoulty-Rossmore hit back with three efforts of their own which arrived courtesy of Cáit Devane (two frees) and Sarah Fryday.

There was still time, however, for Jenny Grace (two frees), Eimear McDonnell and Ciardha Maher to bring the scoring to a conclusion from a Burgess-Duharra point of view.

The Burgess-Duharra panel of players pictured celebrating their final win over Clonoulty-Rossmore.