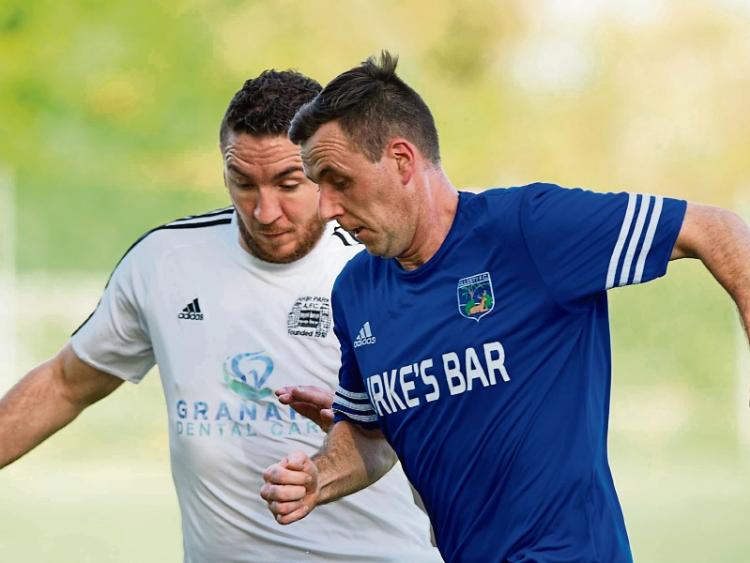 Kieran Allen (Killusty United) tries to get around James English in the Division 3 game played at Killusty on Sunday last. The visitors by 4-2.

In a game played in glorious sunshine, Bansha Celtic inflicted a second defeat of the season on in-form Cashel Town, to end their interest in this year’s FAI Junior Cup.

The visitors started better, getting on the scoresheet first when Eoghan Byrnes was on hand to power home a header from a corner kick in the 12th minute. Ten minutes later Bansha Celtic were level when a move down the left ended with a cross that Niall Daly headed to the net. Despite further chances for both  there were no more scores in a lively first half.

After the restart, the home side began to turn the screw on their Second Division opponents. Youth star Killian Fitzgerald was constantly using his pace to upset the Cashel defence, and he was fouled in the box by the visiting keeper seven minutes in to win a penalty kick that was despatched calmly by Kevin Mullins to put Celtic in front.

Cashel continued to battle however and almost got an equaliser just before the hour mark, but were foiled by a brilliant save from Bansha stopper Callum Fanning. Bernard Fitzgerald thenheaded home with ten minutes left. Kevin Mullins then scored his second with two minutes left on the clock.

To add insult to injury the visitors missed a penalty just before the final whistle.