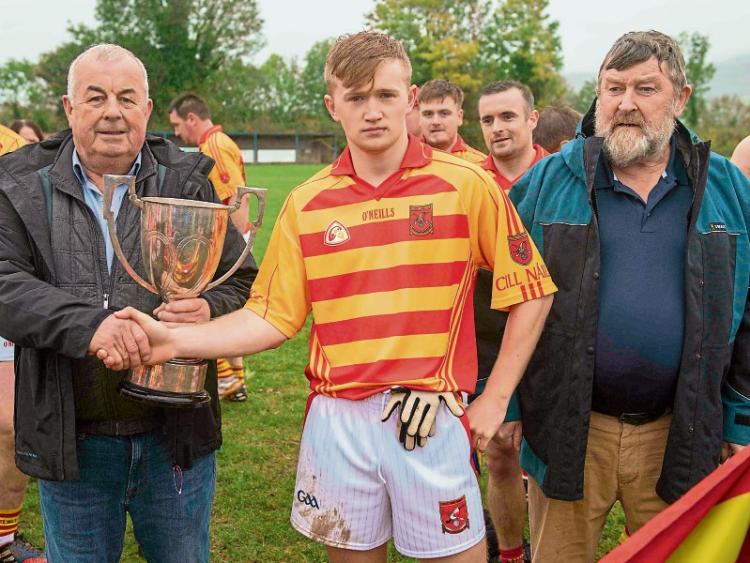 With a damp, storm-clouded sky, casting a grey veil over Slievenamon, patrons could've been forgiven for anticipating a dour, lacklustre low scoring affair in Anner Park last Saturday afternoon, but what followed was surely a contender for one of the games of the year.

Killenaule, on the back of an eleven point dismantling of Commercials, had the easier passage to the final, while Clerihan overcame a stubborn Cahir side after extra-time, in their semi final.

And it was the champions who took the game to Killenaule early on, galloping into a three point lead, with points from Rhys McMurrow and two from Alan O'Donnell.

Killenaule struck back when Eoin Butler was fouled in the square and a saved Declan Fanning penalty was side footed to the net by the on-rushing Eoin Shaw.

No sooner had Fanning given Killenaule the lead with a point from a free, when Aidan Flannery seared through the Killenaule defence, passed, and received back from Liam Carey to fire home Clerihan's first of five goals.

The stylish Alan O'Connor slotted over a free two minutes later, cancelling out a great Declan Fanning point from play as Clerihan began to get to grips on things.

Aiden Flannery had the Killenaule defence in all sorts of bother as he raised another green flag in the 25th minute, putting Clerihan five up.

Up-to now Declan Fanning was ploughing a lone furrow up front, as he pointed another free, having been fouled himself on this occasion.

Assistance was soon forthcoming however, from Eoin Shaw, who now was growing into the game, and his goal bound shot right on halftime, was parried only to Thomas Keaveney who sent a daisy cutter to the back of the Clerihan net. (Clerihan 2-4 Killenaule 2-3 at halftime).

With the game delicately poised, Clerihan began the second half in rampant fashion.

Alan O'Donnell won a penalty, and goalkeeper Kevin Murray nonchalantly, applied the most impudent of finishes.

But the lead was soon whittled down to three after a Declan Fanning goal and point, in the space of a minute.

There was to be no rebound this time from Fanning's perfectly dispatched spot kick.

Liam Carey then added another point, while Alan O'Donnell continued to impress. He had two more either side of another Declan Fanning free, before ghosting past the fullback line to dink home a fifth Clerihan goal, and it looked curtains for Killenaule.

But Clerihan stopped up with ten to play, and Killenaule kept chipping away. Points from Fanning (2) and Thomas Keaveney had it back to three with Killenaule now on the front foot.

The game was tied with the clock ticking as incredibly another penalty was awarded. Gerry Kennedy was fouled, Clerihan were penalised, and Fanning made no mistake.

O'Donnell scored a free in the dying moments to regain the lead, but Declan Fanning did likewise, creating extra time in the game that kept on giving.

The O'Donnell and Fanning shoot-out continued during the additional periods. O'Donnell had three before the turnaround, and a Fanning score was added to by a great individual Eoin Shaw point.

Shaw fired over another screamer during the second period, and two more from the irrepressible Fanning, trumped O'Donnell's last effort, as Killenaule greeted the final, whistle a point to the good.

Clerihan will forever wonder how it's not them lining out against Solohead next weekend. Scoring five goals, and playing some excellent football, they were heroic in defeat, but came up short in extra time, as Killenaule's experience personified by the brilliance of Declan Fanning, was sufficient in the end to bring the spoils back to the hills.