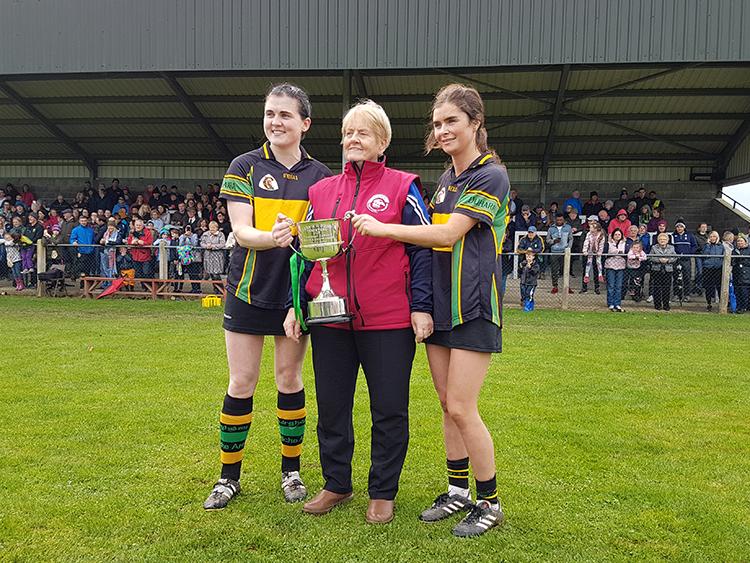 Defending provincial champions Burgess-Duharra suffered a narrow defeat at the hands of Clare’s Inagh-Kilnamona in the semi-finals of the AIB Munster Senior Club Camogie Championship at Inagh on Sunday afternoon.

In a cracking contest Burgess-Duharra set the pace for long stages of the opening half and led 0-8 to 0-3 with twenty-five minutes played thanks in no small part to the unerring free-taking of Jenny Grace. But just when it appeared as if the Tipperary champions had established a serious foothold for themselves in this contest Inagh-Kilnamona plundered a goal and trailed by a single point at the break (0-8 to 1-4).

Indeed, the Clare champions took great heart from that surge and streaked toward a 1-8 to 0-8 advantage with forty-three minutes played - Teresa O’Keeffe, Clare Hehir, Fiona Lafferty and player of the match Andrea O’Keeffe were sensational for Inagh-Kilnamona during this period. Burgess-Duharra desperately tried to rally late on, but Inagh-Kilnamona held out for a famous win following a real battle during the concluding quarter.

Eimear McDonnell presented Burgess-Duharra with the lead in the opening minute, but roared on by a bumper home crowd Inagh-Kilnamona hit back with three successive scores to force the Clare champions into a 0-3 to 0-1 lead. Aoife Keane, Amy Keating (’50) and Andrea O’Keeffe were responsible for those points while Eimear McDonnell and Aoife Keane saw goal-scoring opportunities saved at the respective ends of the field during a lively opening quarter.

Thereafter Jenny Grace and Caoimhe Maher grabbed a hold of the game in the middle third of the field and Burgess-Duharra fired over seven points without reply to take a four-point lead (0-7 to 0-3) with twenty-five minutes played. Eimear McDonnell scored a point from play during this surge while Jenny Grace drilled over five frees; two of those were cracking efforts from long-range. And, Ciardha Maher landed the pick of the bunch off her right to force her side five points clear.

Inagh-Kilnamona brought fifteen scoreless minutes to a conclusion in the 27th minute when Andrea O’Keeffe picked out the run of Aoibhinn Ryan who flicked home a terrific goal. Amy Keating added a free on the stroke of half-time leaving Burgess-Duharra nursing a one-point lead at the break (0-8 to 1-4).

Aoife Keane and Clare Hehir created a goal-scoring opportunity for Aoibhinn Ryan six minutes into the second half and although Ryan managed to convert the opportunity referee Kevin O’Brien called play back and awarded a penalty to Inagh-Kilnamona - Amy Keating tapped over the placed ball and the sides were tied (0-8 to 1-5) following this, potentially, contentious incident.

Undeterred Inagh-Kilnamona roared into a three-point lead thanks to terrific efforts from Teresa O’Keeffe and Fiona Lafferty (two) - the Clare champions now led 1-8 to 0-8 and Burgess-Duharra appeared in deep doo-doo.

The Tipperary outfit, however, rallied with points from Jenny Grace (two - one free, one ’50) to close the gap to one - Burgess-Duharra did enjoy a terrific goal-scoring opportunity of their own in the 46th minute when an enterprising Amy Kennedy effort was deflected out at the expense of the aforementioned ’50.

With such an accomplished side coming at them in waves Inagh-Kilnamona could have been forgiven for wobbling, but the Clare champions settled down once more and contested ferociously for every break in a thrilling conclusion to this contest.

Entering the final thirteen minutes there was just a single point between them (0-10 to 1-8), but Inagh-Kilnamona surged three clear thanks to a cracking Teresa O’Keeffe effort and an Amy Keating free.

Caoimhe Maher picked out Eimear McDonnell with a sensational delivery in the 50th minute and McDonnell did the needful, but almost immediately Inagh-Kilnamona responded when Andrea O’Keeffe landed the point of the game in a real illustration of the home side’s determination. Sinéad O’Loughlin drilled over another point from play and entering the final five minutes Burgess-Duharra found themselves cut four points adrift.

Ciardha Maher set up Amy Kennedy for a fine individual effort in the 57th minute and although Burgess-Duharra threatened a late goal Inagh-Kilnamona clung on and were terrific value for this narrow victory.