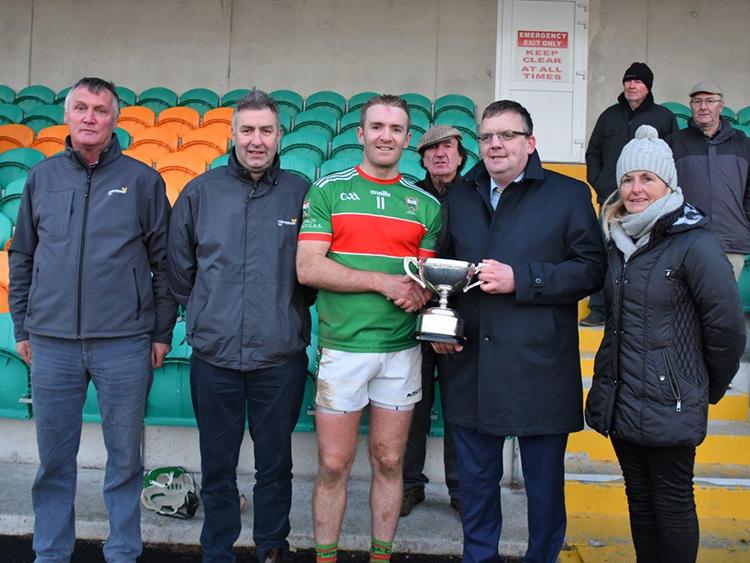 Loughmore-Castleiney scored three points in added time to force extra-time in the Centenary Agri Mid Tipperary Senior Hurling Championship final replay against holders Thurles Sarsfields at Templetuohy on Saturday before driving on in extra-time to claim the title courtesy of a Liam McGrath goal five minutes from the end.

This delayed contest was something of an anti-climax for both clubs whose seasons had ended a few weeks earlier in disappointment with their elimination from the county championships, but a divisional senior title is still a prize to be appreciated and the rivals served up a game worthy of the decider, even if it was played at something below championship intensity.

When they met in the final originally Sarsfields staged a dramatic recovery to send the game to extra-time and while Loughmore’s late surge to finish level in ordinary time on Saturday was not quite as dramatic, it was fully deserved.

Both sides had some absentees - John McGrath and Liam Treacy being the most notable on the Loughmore side with Michael Cahill, Lar Corbett, Stephen Lillis and Cathal Moloney not in the Sarsfields lineout.

Loughmore had started in flying fashion with five points on the board inside ten minutes - four from top performer Noel McGrath and the other from Aidan McGrath - as Sarsfields struggled to get going; their situation was not helped by a number of uncharacteristic ball-handling errors which presented the opposition with opportunities to score.

Pa Bourke had Sarsfields first point after eleven minutes, but further Loughmore efforts from Noel and Brian McGrath had the eventual winners coasting 0-7 to 0-1 at the end of the opening quarter.

The second quarter belonged to Sarsfields, however, and with Pa Bourke, Denis Maher and Seánie Butler finding their range while Pádraic Maher drove them on from the number six spot they slowly reeled in the opposition.

They drew level (1-7 to 0-10) in the 29th minute when Conor Stakelum created the chance for Aidan McCormack to goal and in injury time Pa Bourke fired them ahead (1-8 to 0-10); a very impressive seven-point turn-around achieved during the second quarter.

With the breeze to aid them in the second half the advantage lay with Sarsfields and with points from Pa Bourke, Seánie Butler and Aidan McCormack to Noel McGrath’s effort for Loughmore they appeared to be pulling away after six minutes.

Disaster then struck for Sarsfields as a fumbled short puck-out presented Liam McGrath with the chance to sweep home a Loughmore goal in the 37th minute. Noel McGrath quickly added a brace of points for a 1-13 to 1-11 lead by the 40th minute, but by 49th minute Sarsfields had hauled themselves back on terms (1-15 each) and Rory Purcell’s point put them ahead with seven minutes to play.

Noel McGrath levelled for Loughmore before Sarsfields fired over three points in as many minutes through Pa Bourke, Rory Purcell and Denis Maher to take what looked like a winning lead with two minutes to go.

And so to extra time - an undistinguished opening period yielded only one point; that was scored by Joseph Nyland in the sixth minute.

Conor Lanigan kept Sars in touch with a point which was cancelled by a Noel McGrath free.

Rory Purcell had the final say with a Sarsfields point, but there was no time left to mount a further attack in search of a levelling goal.

This was a considerable consolation for Loughmore-Castleiney at the end of a long and frustrating season which promised more than it yielded as injuries and a fixtures pile-up took its toll. Had they lost they would have pointed to some slack shooting to explain their defeat, but it all worked out well for them in the end and they will enjoy their winter break with some silverware to show for their efforts.

Noel McGrath was the star of the show for them with fifteen points - eleven from placed balls. Brian McGrath, John Maher, Joseph Nyland, Joseph Hennessy, Ciarán Connolly and Aidan McGrath were others to have a big say for them.

Sars gave game time to some of their county intermediate title winning team and will be disappointed to have let their title slip when they looked on course to retain it. They contributed to their own downfall through an over-indulgence in short-passing which resulted in opposition scores. They have lessons to learn from a disappointing season as they face into next term. Pádraic Maher, as always, was a powerhouse in the team with most assistance coming from Michael Purcell, Denis Maher, Rory Purcell, Seánie Butler and Pa Bourke.