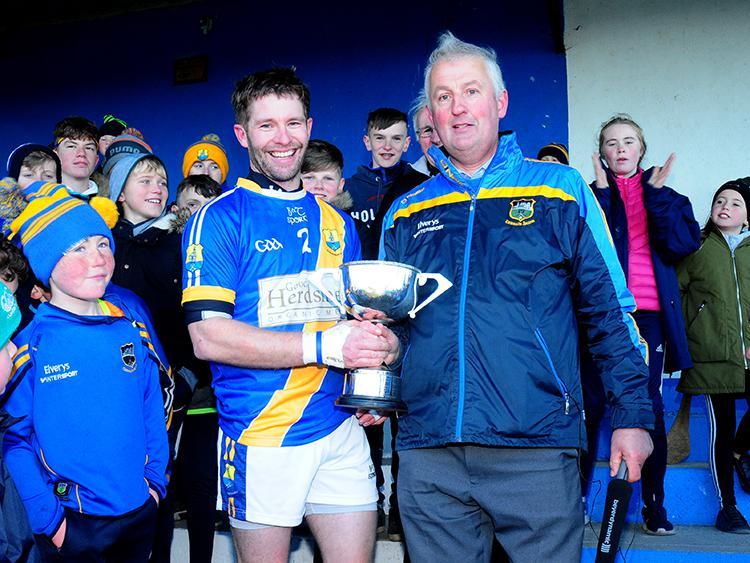 Boherlahan-Dualla have endured some lean years since winning their last county senior hurling championship title twenty-two years ago, but a return to the good times was glimpsed at New Inn on Saturday when they beat Skeheenarinky in the Tipperary Water County Junior A Hurling Championship final after extra-time.

It took those twenty additional minutes to separate the sides after they were deadlocked at 1-11 each at the end of normal time in a tussle watched by a large attendance who received full value for money.

Only a point separated them at half-time in extra-time when Boherlahan led 1-13 to 1-12, but the Mid Tipperary team turned on the afterburners in the second period of extra-time when out-scoring their opponents 0-7 to 0-1 to run out convincing winners.

Boherlahan made good use of the strong wind during that closing phase of the game. Their goalscorer, James O'Sullivan, with a mighty effort from around the centre of the field and Fionan O'Sullivan (from a free) exchanged early scores before Boherlahan kicked on down the home straight. Tossy Ryan struck two points in the space of a minute (the first from his eighth converted free of the afternoon) followed by his only score from play.

That put Boherlahan three ahead and the sense that the game was slipping away from Skeheenarinky was given added weight shortly afterwards when their captain Noel Vaughan, who had been one of their best performers, was sent off when he received a second yellow card from referee Phil Ryan.

Boherlahan made absolutely sure of victory with a string of points during the closing stages. Those scores were supplied by Darragh Hickey (from a free and '65), Fionn MacCullagh and James O'Sullivan.

In the last significant action of the hour Skeheenarinky's Tomas Vaughan sent a late free wide, but even a goal at that stage would only have been a consolation score.

On a sunny, but breezy and extremely chilly day Skeheenarinky were caught cold by Boherlahan's wind-assisted and lightning-fast start. They raised a green flag after only forty-five seconds when Tossy Ryan played a short pass to James O'Sullivan from a '65 and O'Sullivan drilled a low shot to the net albeit from some distance. It was a move that had all the appearances of one well rehearsed on the training ground.

Boosted by points from Patrick O'Dwyer, John M Geehan, a Tossy Ryan free and Fionn MacCullagh Boherlahan flew out of the traps and were ahead by 1-4 to no score by the sixth minute.

Tomas Vaughan got Skeheenarinky off the mark shortly afterwards although a James Kirby score kept Boherlahan in front by seven points after eight minutes.

To their credit the South team didn't panic after that disastrous start. They slowly inched their way back into the picture, helped in no small way by scoring 1-3 without reply. The points came from Tomas Vaughan, Fionan O'Sullivan's free and Danny Barrett before they trimmed the deficit to a point with a great goal. They worked the ball through the lines via John O'Callaghan, Conor Sweeney, Adrian English and Tomas Vaughan before English applied the finishing touch.

That scoring burst gave them a fighting chance after they had started so slowly, but it was significant that Skeheenarinky never once led.

Boherlahan, helped by their first score in thirteen minutes, which came from Tossy Ryan's free, regained their composure to lead by 1-9 to 1-6 at the break.

The Mid team started the second half in the same brisk fashion as they had the first. James Kirby found the target after just forty seconds and another Tossy Ryan free put them three clear within two minutes of the re-start.

But from there to the end of normal time there was never more than a couple of points between them as Skeehenarinky battled hard to stay in touch.

Boherlahan were two ahead with nine minutes left, but Skeheenarinky were in no mood to capitulate. Fionan O'Sullivan's free in the 59th minute, awarded for a foul on Conor Sweeney, and a Tommy Sweeney point, when he collected John Martin's pass almost three minutes into additional time, sent the game to extra-time.

On the basis that they were never behind and finished so strongly Boherlahan deserved their victory. Centre-back Darragh Hickey typified their spirit with an outstanding display and he was still going strong when the contest reached its conclusion. Darragh Devane, Cathal Darcy and captain Johnny Maher also shored up the defence impressively while Patrick O'Dwyer and Aidan Maher put in honest shifts in the centre of the field. Tossy Ryan's accuracy from frees was invaluable while James O'Sullivan, Fionn MacCullagh and Lawrence Hickey also made important contributions.

Skeheenarinky will be disappointed that they ran out of steam in the last ten minutes after they had fought so hard to force extra-time. Riain O'Callaghan, Noel Vaughan and Fionan O'Sullivan worked overtime when they were under so much pressure in the opening half while John O'Callaghan gave his all in midfield, an area where John Martin was also prominent in the second half. Tomas Vaughan and Adrian English carried a constant threat in attack while Conor Sweeney and Tommy Sweeney were others who stood out.